The Rise of NBA MVPs Who Will Probably Never Be Champions

Guys like Westbrook and Harden are all great players, but can they ever win a ring? 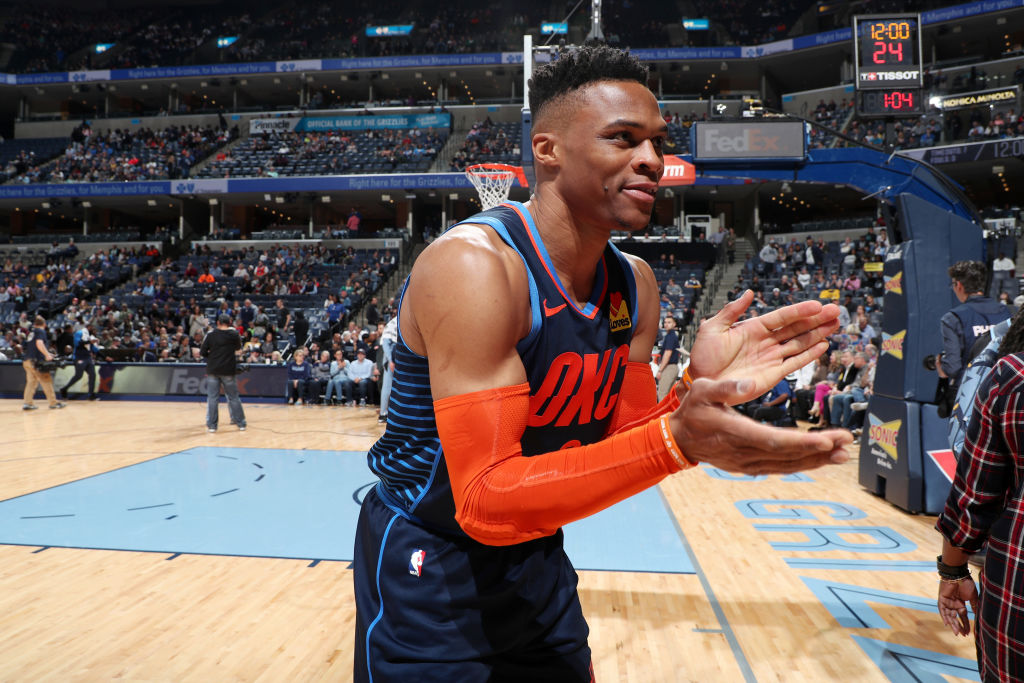 Since the NBA’s Most Valuable Player award was first handed out after the 1955-56 season, there have only been 17 franchises that have won the league’s championship. Over that same time period, there have been 33 players who’ve been named league MVP.  Of those 33 players, 23 won the title in the same year they won MVP. (Some, like Bill Russell, Michael Jordan and LeBron James have multiple simultaneous title wins and MVP awards). That means NBA MVP winners have gone on to bring home a championship nearly 70 percent of the time throughout the award’s history. Having the best player in the league usually meant you were on the road to winning a title.

But something changed somewhere along the way. That percentage is dropping faster than Ben Simmons’ free throw percentage as the NBA now has a glut of players who are capable of putting up MVP-level statistics but appear incapable of winning it all, at least with their current teams.

For example, 2016-17 MVP Russell Westbrook became just the second 20-20-20 player in NBA history (Wilt Chamberlain is the other) when he had 20 points, 20 rebounds, and 21 assists in a game this season. The Oklahoma City Thunder guard, who averaged a triple-double for the third straight season, has been dominant but has never been a member of a championship team — and unlike most ex-MVPs likely never will be.

If Westbrook is anything like his former teammate Kevin Durant, maybe titles just don’t matter as much to him.

“I mean, I’m crazy about winning, don’t get me wrong,” Durant told ESPN.com in 2018. “I’m just not obsessed with winning championships. It’s not the only reason I play. I play for my individual growth.”

That could be a wise frame of mind for some players, because with a stronger challenge from the East coming out of Milwaukee, Philly, and Toronto, not to mention juggernauts like the Golden State Warriors and the Boston Celtics starting to click just in time to make a lot of people lay down bets they’ll win a third straight championship this June, things won’t change for Westbrook this year. Or, thanks to the advent of the NBA super team, anytime soon. The same fate could await Westbrook’s teammate, Paul George, a darkhorse candidate for MVP until late in the season; for James Harden, last year’s MVP but an annual playoff loser; and for Jimmy Butler, a member of the best starting five in the league on the young 76ers, if Philly’s depth problems get the best of them.

Westbrook, however, is a story unto himself.  He could have left OKC as a free agent last year, but signed a five-year, $205 million designated player contract extension in 2017 to remain with the Thunder. Unlike Durant, who now has two rings and counting, instead of trying to join ’em, he elected to try to beat ’em where he is.

Now in his 11th season in the NBA, the 30-year-old guard has played in 98 playoff games, losing in the first round four times, the conference semifinals once, the conference finals three times and the NBA Finals once. In five of those eight playoff losses, the team Westbrook and the Thunder lost to went on to win the title, meaning the eight-time All-Star has lost to the eventual champion in more than half of his playoff appearances.

Westbrook’s most recent playoff failure, a first-round loss to the Portland Trailblazers which was punctuated by this soul-crushing game-winner from Damian Lillard, means the Thunder are 4-12 in the postseason since Durant left. They’ve also lost 12 straight playoff games on the road with Westbrook shooting under 40% from the field over that span (including a putrid 36.28% in the five-game series vs. Portland).

Last season’s MVP, Harden has been an annual candidate for the award since joining the Houston Rockets and is in the running once again this year. Like Westbrook, he’s also fallen victim to multiple championship super teams in the playoffs (Lakers, Heat, Warriors) and likely will again this year if the Rockets play Golden State.

Harden is a spectacular scorer and an above-average facilitator who is averaging more than 36 points and seven assists per game this season. But he’s also prone to cold streaks and mistakes and the supporting cast he has around him, which does include All-Star Chris Paul, sharpshooter Eric Gordon and big man Clint Capela, hasn’t shown they can pick up the slack.

That’s been especially true in the playoffs as the Warriors have bounced the Rockets three times in the past four years with 12 wins compared to just five for Houston. And that was before Golden State added DeMarcus Cousins to their roster, giving them a starting lineup that features not one, not two, not three, not four, but five All-Star-caliber players.

Like Westbrook, the championship drought likely won’t change for Harden next season as he’ll still have to contend with the Warriors and whatever super team LeBron James is able to assemble in Los Angeles as well as possible super-teams in New York and Boston featuring Durant and Kyrie Irving or Irving and Anthony Davis, respectively. The possibility of super-teams forming in Brooklyn with the Nets and in LA with the Clippers is also on the table

Out of the 33 players who have ever won the MVP award, only seven have not also had a championship win on their resume. Should Giannis Antetokounmpo capture the award this year yet fail to carry the Bucks to the title, he’ll become the eighth.

It’s worth noting all the MVPs with this dubious distinction (the others are Charles Barkley, Karl Malone, Allen Iverson, Steve Nash, and, Derrick Rose, who is removed from his MVP-caliber play from just a few years ago) have played in the past 25 years, which also nods to the way the league has shifted overall in the past few decades with a year of MVP-play no longer guaranteeing a career with a championship. Put another way, every MVP from 1956 until 1992 also had at least one championship ring in their trophy case.

As the numbers bear out, for almost four decades an MVP award would almost certainly go hand-in-hand with an eventual NBA ring to add to the trophy case. Now, at least partially thanks to the super team being in vogue, that’s no longer the case.