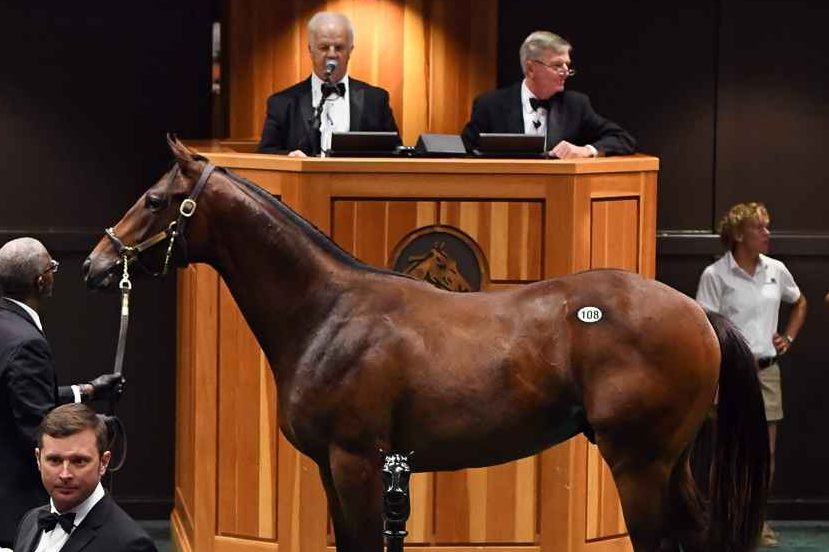 As long as horseshoes have been being nailed to hooves, owning a stud or filly that can compete in the sports of kings has required ponying up a princely sum.

Thanks to a new app that allows users to invest in a racehorse for less than a C-note, that’s no longer the case.

MyRaceHorse’s first-ever platform offers up shares of top thoroughbreds which been purchased, either wholly or partially, from some of the top owners in horseracing.

The horses MyRaceHorse owns are then divvied up into shares which users can purchase for as little as $95. It’s all fully securities compliant and both accredited and non-accredited investors are welcome to use the app.

In addition to the prohibitive up-front costs of owning a horse, MyRaceHorse also eliminates the pricey fees that owners have to pay for stabling, training and medical services by putting a percentage of each purchased share into a cash account. When bills pop up, MyRaceHorse pays them out of that.

If the horse wins a race, that account is topped off for future costs and then the balance is paid out to the owners based on how many shares they own.

“It’s real equity. You own the horse,” MyRaceHorse CEO and founder Michael Behrens tells InsideHook. “If you happen to get lucky enough and that horse winds up being a champion, then you reap the benefits of that. It isn’t easy. It’s hard. Nobody should be draining their 401(k) to invest in horses. But you do have an equity stake and if you do hit the big one, you reap the benefits.”

Since launching in California last year, MyRaceHorse has offered up 35 horses to investors and most of them are already sold out.

Some people come in from $95, some for $3,000 and even some for $50,000,” Behrens says. “It’s price point accessible, so come in for whatever you want. Maybe start off slow and go from there. It’s an app. It’s on your phone. It’s like buying a book on Amazon. We wanted to make it accessible both from a technology standpoint and from a price point standpoint.”

According to Behrens, the average investor on the platform ends up going in for between $1,000 and $2,000 and spreads their cash across multiple horses.

On the other end of the spectrum, Behrens has had an investor come in for as much as $50,000 on a single horse. Besides thinking he was buying in on “a great horse,” Behrens says the investor also liked the transparency MyRaceHorse provides.

“One of the issues that you’ll hear sometimes in racing is that it’s kind of an opaque industry. Ours is the exact opposite,” Behrens says. “Everything from our fees, to what the prepaid training fees are, to what the horse costs, to the vet bills, to sales or use tax … it’s all listed so you know exactly what you’re getting. I think that gives a lot of people confidence and that’s also why we’re starting to get some of the bigger players, just because of the transparency.”

In addition to offering transparency and potential payouts, MyRaceHorse gives owners the opportunity to interact with their horses at races and provides other perks like free tickets and watching races from the winner’s circle.

“One of the exciting parts of owning horses is to go into the paddock before. The jockey’s there, the trainer’s there, it’s very exciting,” Behrens says. “But there’s limited space. I can’t bring 500 people into that space. So the app has a lottery. Then we randomly select people to get it so that day they get to go experience literally what normally you’d have to buy the whole horse to do. Everybody else gets free tickets or upgraded seating or stuff like that. Our goal is to provide as many of those perks as possible to make sure that you get the full thrill of racehorse ownership.”

A perk all owners receive is continuous updates about their horse(s).

“We have videographers at a lot of the tracks,” Behrens says. “If you own the whole horse, you’d want all that feedback. You get that via the app. So we see it all the time. As soon as they know the horse is working out, they’re pressing refresh, refresh, and all of a sudden the updates come in from the exercise rider and maybe there’ll be a video update from the trainer. That’s the kind of stuff that people love. Imagine you follow that horse around for six or seven months while it’s training. By the time it comes to the races, you’ve learned so much about that horse. How fast is it in the morning? What does it struggle with? Does it like when horses come to the outside. Does it run better on cold days or warm days? Does it like blinkers and non-blinkers? You learn so much about it by the time it runs. You’re fully vested.”