Ben Cohen explains in his new book "The Hot Hand: The Mystery and Science of Streaks" 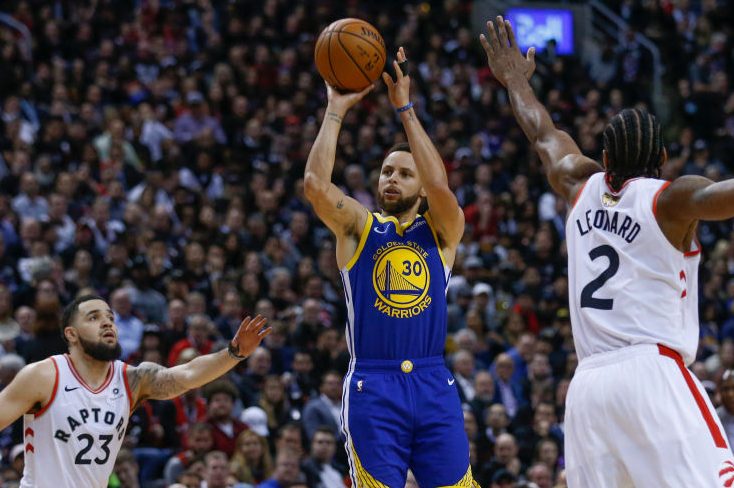 When it comes to Steph Curry, there are three words that strike fear into opposing NBA coaches, players and fans across the league: He’s on fire.

If former Detroit Pistons sixth man Vinnie Johnson was “the Microwave” of the league in the 1980s thanks to his ability to heat up quickly, Curry is the modern NBA’s blow torch. But had it not been for a night at Madison Square Garden in 2013 when Curry had the hottest hand of his life, that might not be the case.

During his historic night, Curry, who had yet to win his multiple MVP awards and trio of NBA championships, became the first player in NBA history to score at least 50 points while making at least 10 three-point field goals.

Though it seems commonplace now, Curry taking (and making) that many attempts from long range was nearly unheard of, as NBA teams only averaged 20.0 attempts per game total at the time. As the former Davidson star singlehandedly proved that night, if you can shoot three-pointers like Steph Curry, you probably should.

The league clearly took notice, as three-point attempts have steadily crept up since 2012-13 and now sit at nearly 34 attempts per game. At least partially due to that increase, scoring per game (111.3 points) in the NBA is at its highest mark in five decades.

Ben Cohen, a sports reporter for The Wall Street Journal who covers the NBA, college basketball and college football, traces that offensive evolution back to that cold winter night at MSG when Curry was on fire.

“I think that game changed Curry’s career and his life,” Cohen tells InsideHook. “It changed the future of the Golden State Warriors. And I really think it changed the fate of the entire NBA over the next few years. Because that was the game that kind of convinced everybody Steph Curry was for real and that shooting three-pointers, and doing things nobody had ever done before, was actually prudent if you could shoot like Steph Curry.”

As Cohen explains in his new book, The Hot Hand: The Mystery and Science of Streaks, Curry still identifies that loss to the Knicks as the hottest game of his life and ranks it as one of the top three most transcendent moments of his career. (Winning his first title and going golfing with Barack Obama are the other two.)

Besides the results, that night may be burned into Curry’s memory because he was shooting real-life basketballs the same way he used to shoot virtual balls when he was “on fire” while playing the video game NBA Jam as a kid growing up in the 1990s. Curry, 31, used to play the game “all the time” with his brother Seth (a guard for the Dallas Mavericks), sometimes using the Charlotte Hornets who their dad, Dell, suited up for in the ’90s.

In the game, a player who makes three baskets in a row is “on fire” and basically can’t miss until their opponent makes a basket. At MSG, Curry was essentially playing out his NBA Jam dreams on the basketball world’s biggest stage.

“Steph is right around my age, which means that he also grew up playing NBA Jam,” Cohen says. “He is exactly in that generation to have grown up with this video game as a part of his life. He told me he played it. His dad was in some versions of the game so, if you think about it, he could sort of pretend that he was playing as himself.”

On the court that night in New York, Curry was “on fire” in much the same way he likely was at points while playing NBA Jam decades earlier.

“He has always believed in the hot hand. It’s very rare to find a player who doesn’t.” Cohen says. “I asked Curry if he’d ever met anyone who didn’t believe in it. He said something along the lines of, ‘I haven’t met that person yet.’ To me, that’s really important, because it shows that not only does he believe that, but everyone on the court believes in it. Which means that when he’s hot, it’s changing the behavior of everybody around him.”

When a player like Curry has the hot hand the way he did at MSG, it has a huge effect on what’s happening because it makes everyone behave differently, according to Cohen.

“If you have the hot hand in basketball, your team is going to start running plays for you and you’re going to feel more emboldened and empowered to take harder and riskier shots,” Cohen says. “That can kind of elevate you to another level. Now, of course, the defense is also going to adjust, and it might be harder for you to make those shots because they are from longer distances and they’re riskier. You can really see the behavior of everybody on the court, and even everybody in the arena, change when somebody is hot. That’s one of the compelling things to me about this topic, that it’s this phenomenon that sort of touches everybody when it happens. That feeling of the flow state is one of those things that people have studied for a long time and we’re still trying to wrap our minds around it. We know what it is. We know that it makes us happy. But we don’t know why, how or when it is going to happen. I asked Curry himself about that and even he doesn’t know.”

Whether he can predict when it’s coming or not, what’s more important is that Curry can recognize the hot hand when he has it and then take advantage of it the way he did against the Knicks.

“Curry is obviously the greatest shooter of all time, but even for him, he used this hot hand period that night when he almost couldn’t miss on the court to elevate to a higher plane,” Cohen says. “That was the night that he kind of became the Steph Curry that the world has come to know. I think it was the game when he realized he could probably do more and the whole world realized his ability to shoot could warp the behavior of everybody around him. It feels kind of crazy because it was only seven years ago, but so much about the game has changed over those seven years. Maybe things were changing already for him, but I think that was the game that sort of crystallized things for him.”

And maybe, just maybe, those NBA Jam sessions played a part in it.