Meet the Stunt Drivers Surviving the ‘Well of Death’ 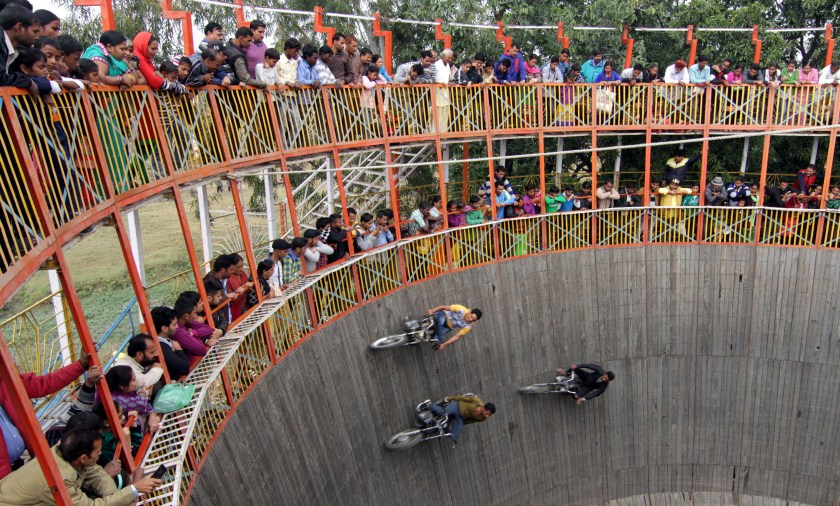 It’s like if the chase scene in “The Great Escape” happened in “Inception.” Maut ka kuan (Well of Death) is an adrenaline-fueled sport in which people drive their cars and motorcycles around on the walls of a Thunderdome-like bowl with spectators lining the edges above. Groups of vehicles whip around the nearly-vertical walls at speeds fast enough for centrifugal force to take over. Derived from motorcycle board track races held in New York’s Coney Island in the early 1900s, the well of death occurs in only a few places on Earth these days. Northern India is one of them, where the wooden well is usually about 25 feet high and 30 feet wide.

Filmmaker Erik Morales recently released a short documentary detailing the dangerous but thrilling sport. In his 15-minute film, Morales profiles the riders as much as the act itself. He spoke to Nowness about what inspired him to document the riders in Soron, India. Here’s what he said:

“When people ask why I made this film my answer is always, ‘because it’s cars driving on the f–king walls!’ The well of death (or Maut ka kuan) is an incredible mix of acrobatics and sheer engine power, where the brave defy gravity and drive cars and bikes on the walls of a wooden pit. These arenas are a popular attraction at travelling fairs, where the tickets are cheap and the crowds are plenty. Viewers watch the action from a metal platform above the pit, while the magic unfolds beneath them—the riders, the cars, the bikes, the lights and the noise.”