Kyrie Irving wants to deprive America of basketball, but for the right reasons 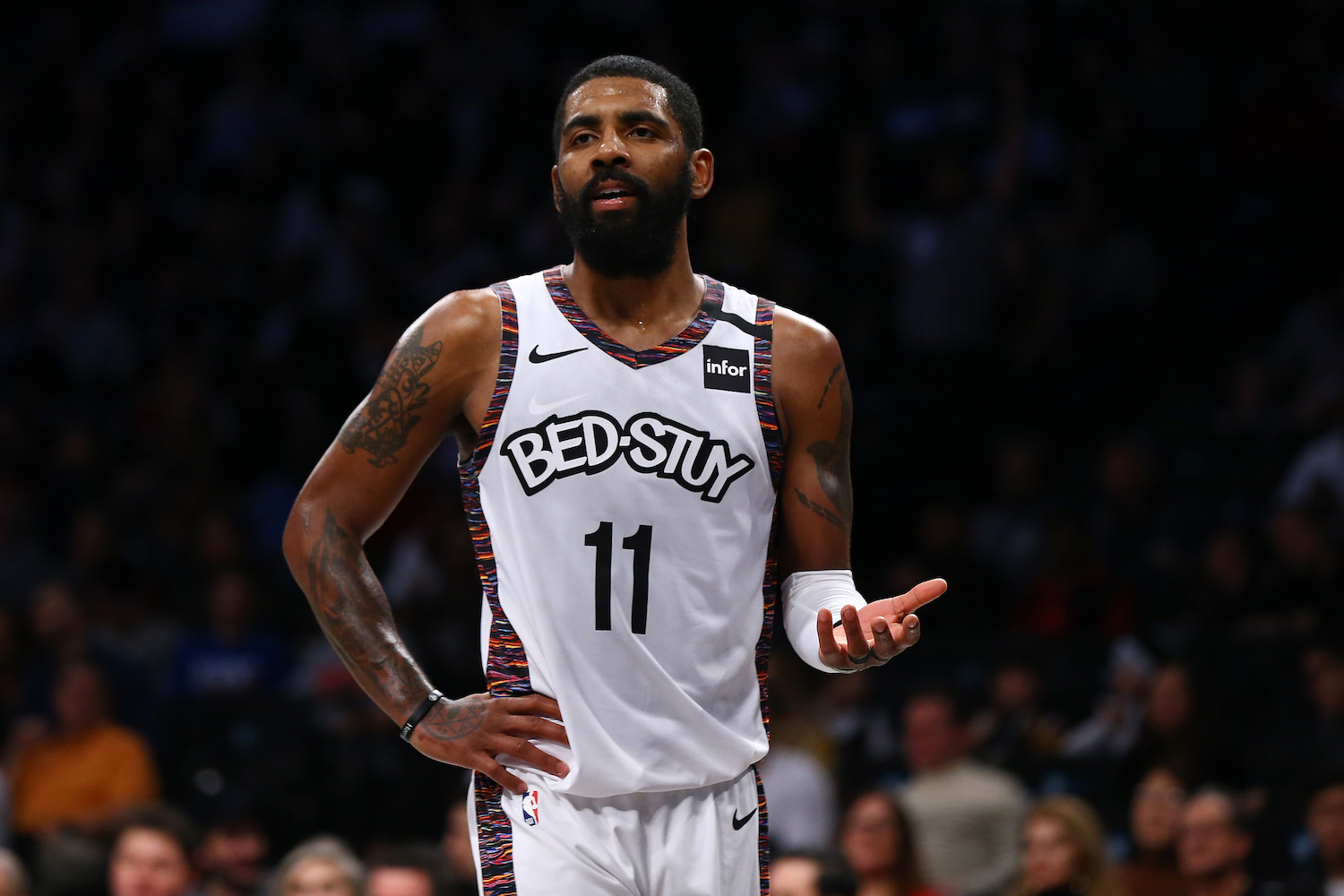 Kyrie Irving ponders how we "know" dinosaurs existed when nobody has ever seen one on God's flat earth.
Getty Images
By Jack Tien-Dana / June 13, 2020 12:52 pm

Last week, the NBA announced that the season would resume on July 31 in Disney World, barring any unforeseen circumstances … such as, say, Kyrie Irving deciding to wage a guerilla resistance movement that could upend a plan that has already been rubber-stamped by the League, the owners and the Players Association.

From a certain vantage point, this whole situation is ridiculous; Irving, whose alarm in the morning is presumably “Strawberry Fields Forever” in reverse, tends to spout some truly outrageous conspiratorial nonsense. A self-proclaimed “smart-ass individual,” he has doubted the roundness of the Earth, the moon-landing, dinosaurs and the JFK assisination. As a result, it’s easy to imagine that Irving’s reluctance to travel to Orlando stems from a fear of 5G cellular networks or that he’s spooked by the animatronic quasi-Masonic deep state that is the Hall of Presidents.

To be sure, Irving isn’t merely the only NBA player with major Jill Stein energy — he’s suddenly the most powerful man in basketball. Although Irving has become a meme because he seems like he snarls Debate me, coward at Mythbusters reruns, his concerns about the remainder of the NBA season are eminently reasonable and have strong support around the league. On a Zoom call with nearly 100 other players (including NBPA president Chris Paul, Carmelo Anthony, Dwight Howard and Kevin Durant), Irving reportedly emphasized that the players have a unique opportunity to leverage their platform to combat racial oppression and systemic racism in the wake of George Floyd’s murder. “I don’t support going into Orlando,” Irving said on the call, according to Shams Charania of The Athletic. “I’m not with the systematic racism and the bullshit. … Something smells a little fishy. Whether we want to admit it or not, we are targeted as black men every day we wake up.” And, even more forcefully, he avowed: “I’m willing to give up everything I have (for social reform).”

Crucially, Irving is not alone. “Once we start playing basketball again,” an anonymous player told ESPN, “the news will turn from systemic racism to who did what in the game last night. It’s a crucial time for us to be able to play and blend that and impact what’s happening in our communities.”

Beyond social issues, players also worry about the logistics of the NBA’s proposed bubble — it would be a tough sell to convince anybody (let alone hundreds of very tall millionaires) to indefinitely confine themselves to a single hotel room without their family. What’s more, the safety and efficacy of the bubble is theoretical at this point, since there’s no way to accurately predict the fate of a 1,500-person quarantine. Additionally, Utah Jazz All-Star Donovan Mitchell reportedly noted that the cocktail of the long hiatus, limited prep time and postseason intensity could leave players vulnerable to injuries. Per Yahoo’s Chris Haynes, Orlando Magic center Mo Bamba shared that younger players often feel intimidated to fall in line with the desires of superstars; Carmelo Anthony allegedly apologized and promised to help foster a more inclusive environment, reaffirming his good-guy credentials and also narcing on himself that he doesn’t totally know what “superstar” means.

Complicating matters, though, is the simple fact that a lot of powerful people have a vested interest in the NBA completing its season. For starters, the league’s 30 owners didn’t become billionaires by basing business decisions on their employees’ emotions. If enough players opt out of going to Disney World that the season is canceled, the owners could — and likely would — implode next season out of spite. In this scenario, the players would not only forfeit $1.2 billion of salary for the last quarter of this season, but would also be locked out of next season until they made some sort of long-lasting economic concession as penance (e.g., agreeing to receive a smaller portion of the league’s basketball-related income than the 50 percent they get now). The possibility of empty arenas for the entire 2020-2021 season, as predicted by the NBPA leadership, adds another major financial stressor.

Accordingly, Irving’s rebellion marks the end of the basketball’s era of good feelings. Beginning with the ratification of the current CBA in 2011, the league has enjoyed years of uninterrupted growth. The NBA inked a record-setting $24-billion television contract in 2014, and franchise valuations have increased sixfold since 2010. The NBA fancies itself to be the cooler, more progressive alternative to the grimly militaristic NFL or MLB, which mainly courts the music-today-sure-ain’t-what-it-used-be crowd; now, basketball is staring down the same kind of no-winners labor dispute that have plagued their stodgier rivals.

As such, the NBA’s corporate wokeness now rings fairly hollow. Over the last two weeks, all 30 franchises (eventually) released statements that Black lives matter, yet the league and its partners find themselves trying to squash the very same movement that they ostensibly support, appropriating the bad-faith shut-up-and-dribble rhetoric that it has broadly denounced.

Ever since the news of Irving’s position broke on Friday afternoon, Adrian Wojnarowski, ESPN’s famously well-connected NBA reporter, has carried so much water for the league that he could be mistaken for an aqueduct. Wojnarowski is a premier newsbreaker partly because he’s skilled in the journalistically-iffy practice of trading favorable coverage for information. Unsurprisingly, the Wojnarowski report about Irving’s Zoom call drops all pretenses of objectivity.

“Irving’s stance has pitted him against the league’s establishment,” Wojnarowski writes, “including his former Cavaliers teammate LeBron James, once again. There’s significant support to resume the season among the league’s superstars — most of whom are on playoff contenders — and Irving seems to be relishing the clash.”

Throughout the piece, Irving, who’s also the Nets union rep, is painted as a disingenuous turncoat who just a week ago only cared about if he could drink Hennessey at Disney World but is now exploiting the tragedy of George Floyd’s death to drive a wedge between players and the NBA for kicks. In everything Wojnarowski writes, he frames his sources as the protagonist, and there’s little doubt over what the NBA’s executive class thinks of Irving.

Ultimately, Irving’s objection will be overruled — there’s too much money at stake for the postseason to not happen. Even so, Irving has exposed the NBA’s inherent discomfort with what it has become. Every micro and macro hoops event since The Decision can roughly be traced to increased player empowerment, the concept that players should be able to seize control of their own career. By and large, the goals of the players and the NBA work in tandem, forming a symbiotic relationship that minted a new generation of marketable stars who promote the league even as their fame transcends it. Lebron James is undoubtedly More Than An Athlete, but still acts as a good ambassador for the sport; Steph Curry’s personal empire stretches into television production and cooking, but his public persona has the lame pleasantness of an Easter brunch at Top Golf. Even Russell Westbrook, who has become a fashion icon for his off-court exploits, saves his most audacious jawns for the arena tunnels.

Kyrie Irving, on the other hand, doesn’t seem to really give a shit about the NBA. Specifically, he appears to regard it with something neighboring contempt. Focused on himself and his incredible thoughts, he’s the truest avatar of player empowerment because he doesn’t feel compelled to perform or conform. He’s a bizarre, alienating guy, and if that bothers you, that’s a You Problem. On the court, he cuts a similar profile: he’s a bucket and/or a problem, but he doesn’t make his teammates better and can’t function within the flow of a team’s offense.

But when Irving has the ball, a unified theory of Kyrie emerges. In a famous essay for the New York Times, David Foster Wallace attributed Roger Federer’s dominance to the Swiss’s superior kinesthetic sense, the ability to perfectly calibrate and execute an almost infinite number of micro-adjustments so rapidly that the process itself “recedes from normal consciousness.” Irving, another spatial genius, instinctually understands the topography of the court in a way that’s all his own, and he applies this singular perspective to all aspects of his life. After all, if you had the preternatural sense of timing and angles that Irving does, wouldn’t you also be skeptical of the rules and conventions that are created by people who just don’t understand you?

This sibylline quality is precisely why Irving has successfully charted a new path for superstar athletes. He’s proven that the circumscribed box of jockdom is an illusion, and he escapes any easy characterization. Even a basic summary of Irving is dizzying: he’s an elite point guard and a team-cancer who hit the clutchest shot in NBA history, but is an off-putting oddball who’s also somehow organizing one of the most potentially important protests in sports history. By combining the disillusionment of a Byronic hero, the vision of Colin Kaepernick and the worldview of somebody who gets all their news from Joe Rogan, Irving has inadvertently become the NBA’s superego, nourishing himself in a k-hole of strangeness that most people are trained not to indulge.

In doing so, Irving has exposed the seams of the NBA’s most elemental organizational tenet — the belief that possessing financial control is the same as possessing control over who and what you finance. With the NBA hemorrhaging money, Irving now holds billions of dollars hostage, reshuffling the league’s power dynamics as the owners reckon with the reality that an NBA team without players is basically a super expensive Synergy Sports subscription and athleisure clothing line. The conventions and structures of authority that undergird the NBA are suddenly fungible. What does government mean to you?