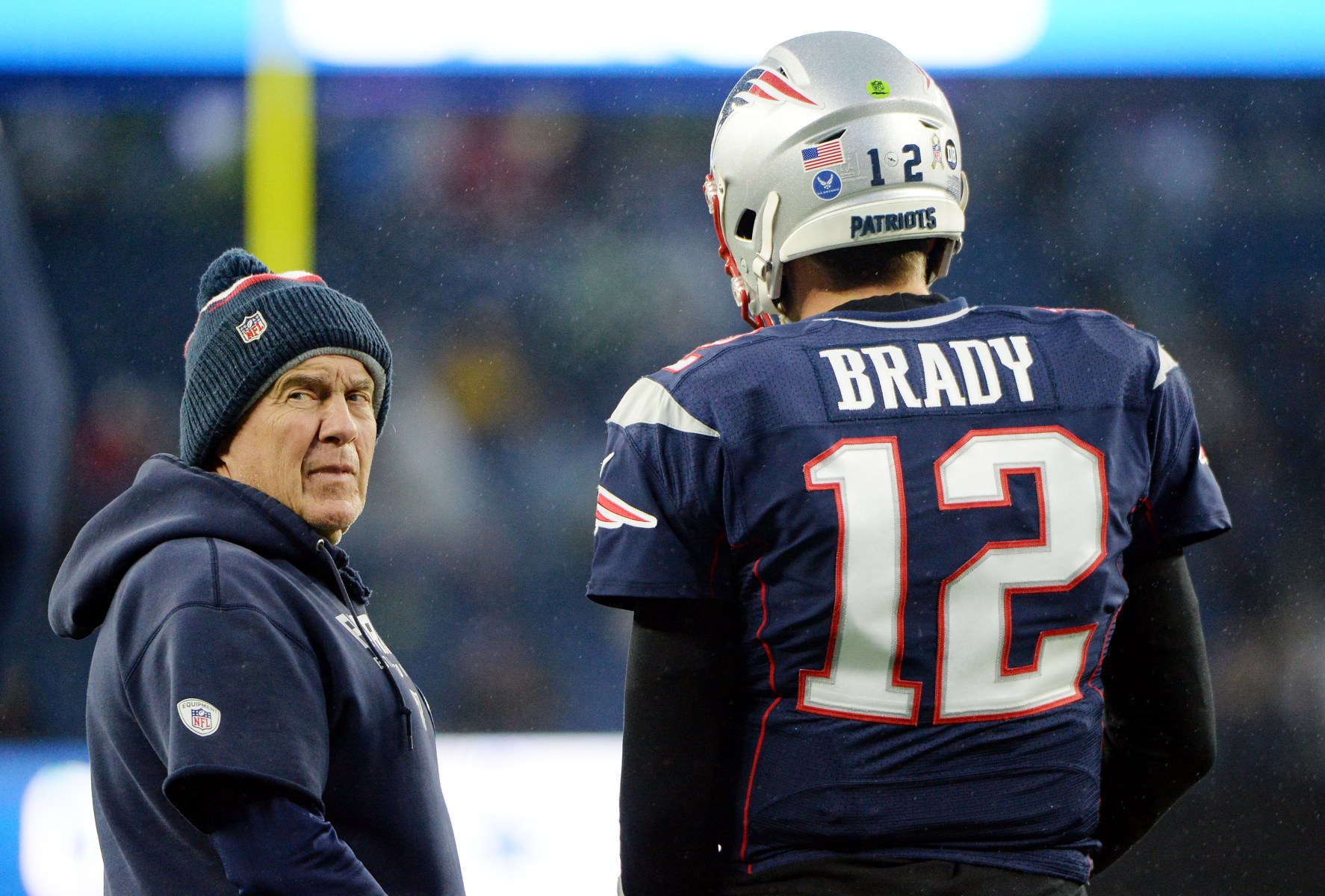 Bill Belichick talks with Tom Brady before a game against the Cowboys. (Kathryn Riley/Getty Images)
Getty Images
By Evan Bleier / March 12, 2020 6:30 am

Though it has resulted in six diamond-studded Super Bowl rings, the 20-year relationship between Tom Brady and Bill Belichick has been rocky at times.

Now, with that relationship potentially coming to an end as Brady is set to test free agency for the first time in his NFL career, the star quarterback and his coach are silently sniping back and forth at one another using media members as mouthpieces.

Belichick and Brady’s primary weapons of choice in their unspoken war of words? ESPN reporters.

Though Brady’s future in New England has been a constant topic across ESPN’s platforms during the NFL offseason and numerous reporters for The Worldwide Leader (including Mike Reiss, Field Yates and Stephen A. Smith) have weighed in on the topic, two reporters in particular — Jeff Darlington and Dianna Russini — have been instrumental in pushing the agendas of Brady and Belichick’s respective camps in recent weeks.

Darlington has gone on the record multiple times about Brady’s future in the past, indicating at every turn that the 42-year-old quarterback’s days in New England are numbered. Last month, Darlington went so far as to say he would be “stunned” if Brady returned to the Patriots.

He added Brady was telling people “very close” to him: “It’s not going to happen. I’m going somewhere else.”

But according to Darlington’s colleague Russini, Brady may not have the opportunity to go anywhere else, because the reported interest in signing him from teams including the Chargers, Raiders, Titans and Giants doesn’t actually exist.

Russini even said all the interest in Brady that is being reported by Darlington and others may actually be a smokescreen to save the quarterback from “embarrassment” that the market for him isn’t “robust.”

“The reality is, just from talking to sources around the league, it seems Brady is a lot more interested in teams than teams are interested in Tom Brady,” she said. “I think at this point right now, Brady’s interest in other teams outweighs the amount of teams that are interested. I think the team that we need to put back up on the board that we’re all walking away from is New England. I think we, for whatever reason, because some of the reporting at ESPN has been excellent, at least from the side of Brady, that yeah, he is interested to see what the market is. But what is that market gonna be?”

Based on those conflicting reports, it certainly appears Russini is carrying water for Belichick and the Patriots, while Darlington is putting out information that works to the advantage of Brady and his team. While you can criticize them for it, Russini and Darlington are getting access to two of the most important people in the NFL in exchange, an invaluable commodity in their profession.

Winners on the field for much of the past two decades, Belichick and Brady both also want to make sure they win at the negotiating table and are using Russini and Darlington to help them do it. While it’s a somewhat distasteful tactic, it’s also a necessary one given the stakes of the game Brady and Belichick playing.

So, what will actually happen when Brady is officially able to sign with any of the NFL’s 32 teams on March 18? Nobody, including Darlington and Russini and probably even Belichick and Brady, really knows.

What is clear is that for Brady to end up back with the Patriots, it will require him and Belichick to bury the hatchet, the same way they did in 2018 after an inflammatory ESPN story by Seth Wickersham that exposed cracks were starting to turn into chasms in New England.

Of course, a month after that story published, the Patriots made it to the second of three consecutive Super Bowls, losing to the Eagles.

For the team to get back there again for a chance at a seventh championship, it will require the greatest coach and QB duo in NFL history to sit down and talking to each other instead of using ESPN reporters like Darlington and Russini to do it.