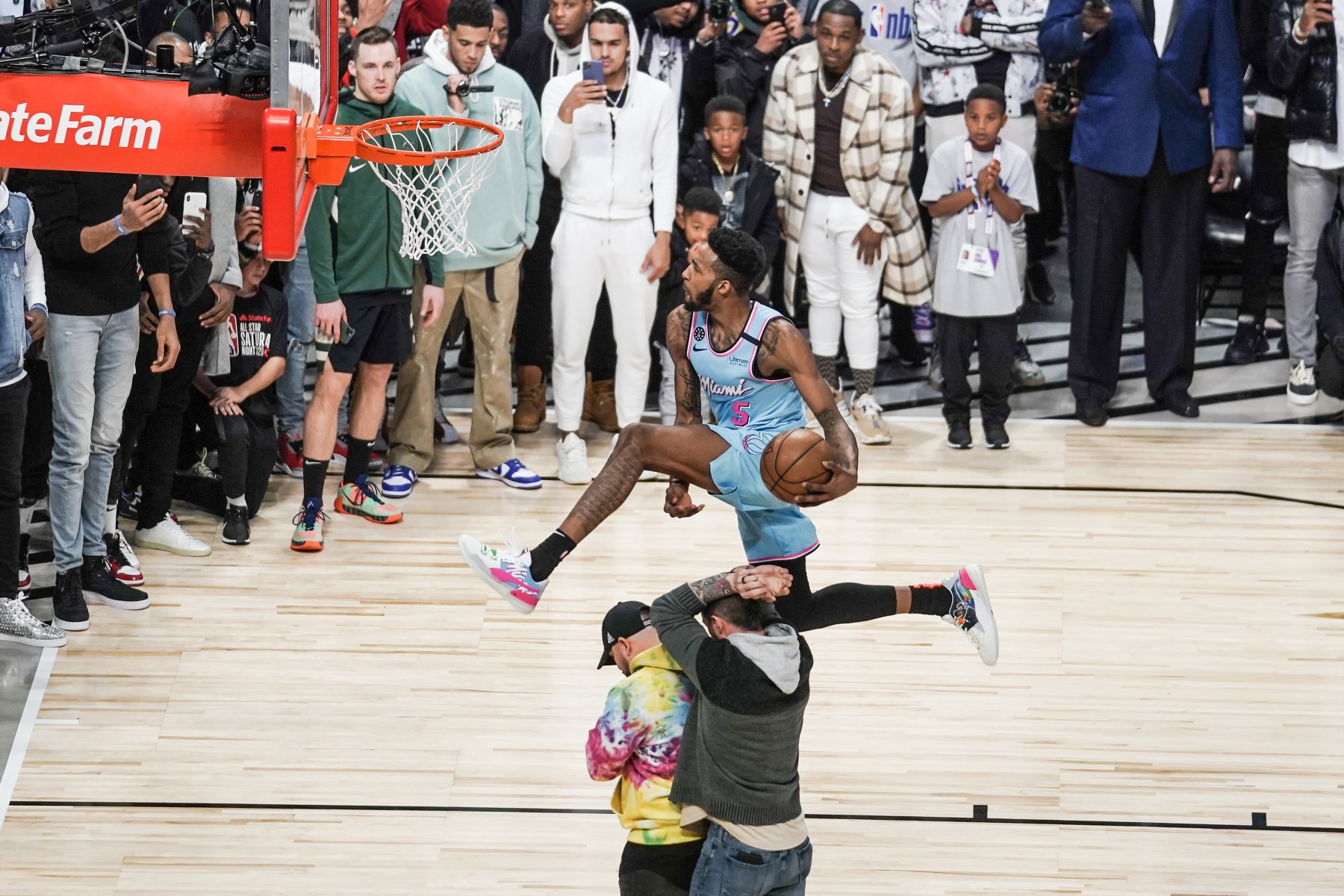 Derrick Jones Jr. and his Miami Heat look to move up in the Eastern Conference after the All-Star break.
van Shum - Clicks Images/Getty Images
By Louis Keene / February 17, 2020 10:14 am

The camera finds Derrick Jones, Jr., sitting alone on the bench. He has just struck out in the championship round of the 2017 Slam Dunk Contest, missing all three attempts of a preposterous pastiche — going through the legs after hurdling a cheerleader, a mascot and some guy in a hoodie. Jones looks up at the video board, rubbing his face pensively. It’s a lot to take in on one of his first nights in the NBA.

Derrick Jones made his first dunk contest as something between a curiosity and a ringer. At the time, the Phoenix Suns — who were about as inspiring then as they are now — were shuttling Jones to and from the NBA’s junior circuit. But with the league struggling to find marquee contestants that year, it offered a spot to Jones, whose vendetta on D-League rims that year had made him a social-media favorite. The high-flying rookie forward had scored a grand total of 20 points in seven games before that All-Star Weekend. With millions of people watching the dunk contest all over the world and his NBA contract anything but guaranteed, Jones’s was as open a tryout as a basketball player has ever had.

That night had stuck with him, rankled him, for three years. “I could have made the dunk,” Jones tells InsideHook after a February 5th team shootaround in Los Angeles. “I’ve been waiting since that time I lost, waiting my time patiently. But it came true now, so I get to redeem myself.”

Some rolled their eyes at his backdoor entry into the competition back in 2017. But Saturday night, when Jones won the dunk contest — nailing along the way a variation of that missed 2017 attempt — he was representing the Miami Heat as a key rotation player who has found a special niche in the modern NBA. His per-game numbers may not leap out at you (or over you) quite like he can. But he is providing much more than entertainment value for an Eastern Conference powerhouse with sights on the NBA Finals. No one is asking whether he belongs.

It’s possible that for a player like Jones, trying to prove that he’s not just a dunker overlooks an important point. Being a great dunker is useful! There’s a reason teams measure verticals at the draft combine — his was a cool 48 inches — and it’s not NBA 2K ratings: the ability to fly is actually quite valuable in a sport played by giant humans on 10-foot-high baskets. Considering that a dunk is the highest-percentage shot in the game — significantly higher than a layup — Jones’s 56 jams so far this this year are 56 Heat possessions reaching the optimal outcome.

That’s a great place to start. But Jones became an effective two-way player by learning how to impose his track-meet athleticism on the non-dunking (or at least pre-dunking) stages of the game. The dude is a hummingbird whirring around the court with start-stop industry. Some of that work shows up in hustle stats — deflections, screen assists, offensive rebounds. And a fair amount of it turns into dunks.

Many of his dunks are made possible by standard defensive practices that simply do not account for Jones’s quickness and leaping ability. Players generally try to position themselves on defense so that they are close enough to the ball to help, but not so far away from their primary assignment that they give up an open shot. Their proximity calculations for Jones are often off.

It’s especially devastating in pick-and-roll, when the man guarding Jones — stationed in the corner — has to choose between helping on the big rolling the rim and staying attached off the ball. “They go out to help on the roll, and I step up and get a lob,” Jones says. “They don’t help, my teammate get a bucket. Either way, you gotta make a decision, either you leave me or not. The choice is theirs.”

It’s a snap decision every NBA wing has to make several times a game no matter who they’re playing. The difference with Jones is that his lethal closing speed puts him in the corner and above the rim almost at the same time. Bam Adebayo, the all-star center who has found him for a bushelful of alley-oops this year, described the Jones baseline cut as a blur.

“He’s just one of those guys that can get to the rim faster than anybody I’ve ever seen,” Adebayo says. “You can throw it anywhere above the rim and he’ll go get it.”

It is said that elite three-point shooters have gravity — they receive constant, close attention wherever they go, which spreads the defense for other offensive action. Jones isn’t known as a shooter — he’s made about a quarter of his attempts from behind the arc — so he has deployed his forgettable marksmanship into a kind of anti-gravity. He’s mastered the art of disappearing.

“I can’t give away my tactics, but I just read the defense,” he says.

We’d be doing Jones a disservice to dwell any longer on his aerial exploits. If you ask him, he’s carved out a role with the Heat on the defensive end — taking tough assignments, fighting around screens, creating havoc in passing lanes, and chasing loose balls. Coach Eric Spoelstra has deployed a zone defense more than anyone this year; Jones’ seven-foot wingspan and ability to close space quickly enables him to thrive in it. And when the Heat get a steal and Jones takes off on the break, well…you know.

When it comes to defense, the 23-year-old is as ambitious as his dunk attempts. He’s grown accustomed to picking up the other team’s best scorer, and he told InsideHook he wants to win Defensive Player of the Year multiple years in a row. “I’ll settle right now for first team, All-Defense,” he says.

Jones will have plenty to learn from Andre Iguodala and Jae Crowder, the defensive-minded forwards Miami acquired at the February 6th trade deadline. But their arrival — and the two-year extension Iguodala signed the day of the trade — may spell a reduction in Jones’s playing time down the road, and perhaps the end of his time with the franchise this offseason, when he becomes a free agent. Still, Jones’s athleticism unlocks a pace and style that the Heat excel in, and though pairing him and Iguodala would leave a Heat lineup short on shooting, it would also make them a defensive nightmare on the wing — even with perennial all-league defender Jimmy Butler on the bench.

It’s easy to forget that the Heat are as young as they are because their growing pains are at times hard to see. Adebayo is in just his third year. Duncan Robinson, arguably the NBA’s best shooter this year, is in his second. Tyler Herro and Kendrick Nunn have flourished as rookies playing starters’ minutes. And Jones turned 23 at the dunk contest. (Unfortunately, he did not dunk the cake, as many of us hoped.)

In the meantime, his most high-profile teammate vouches for Jones unequivocally. “You could talk about his ability to guard multiple positions, his ability to jump out the gym, to make shots, to cut, to do all of that, but I don’t think that’s nearly as important as the energy that he brings,” says Butler. “When you’re talking about he’s always smiling, he’s always happy, he’s always a person that you want to be around.

“Everything doesn’t go his way all the time, but he’s always positive. He’s always in it for the team.”

Jones was not auditioning for anyone in the 2020 dunk contest. He entered it on solid NBA footing, with a growing reputation as a dynamic offensive threat and a versatile defender. He is logging real minutes in hard-fought games these days, and when he launched for one of the greatest contest dunks of the last few years — an off-the-backboard, jump-over-a-guy, through-the-legs spike — he was wearing whatever toll 56 in-game dunks takes on your body. He had unfinished business, and he competed like it.

“It’s not like anything has changed, or I lost any of my athleticism or gained any more,” he says before leaving the practice court. “Everything is the same: I feel the same, I dunk the same and I look the same. So I’m gonna go out there and be the same old me.”