In Daniil Medvedev, Tennis Finally Has Its Next Great Scoundrel 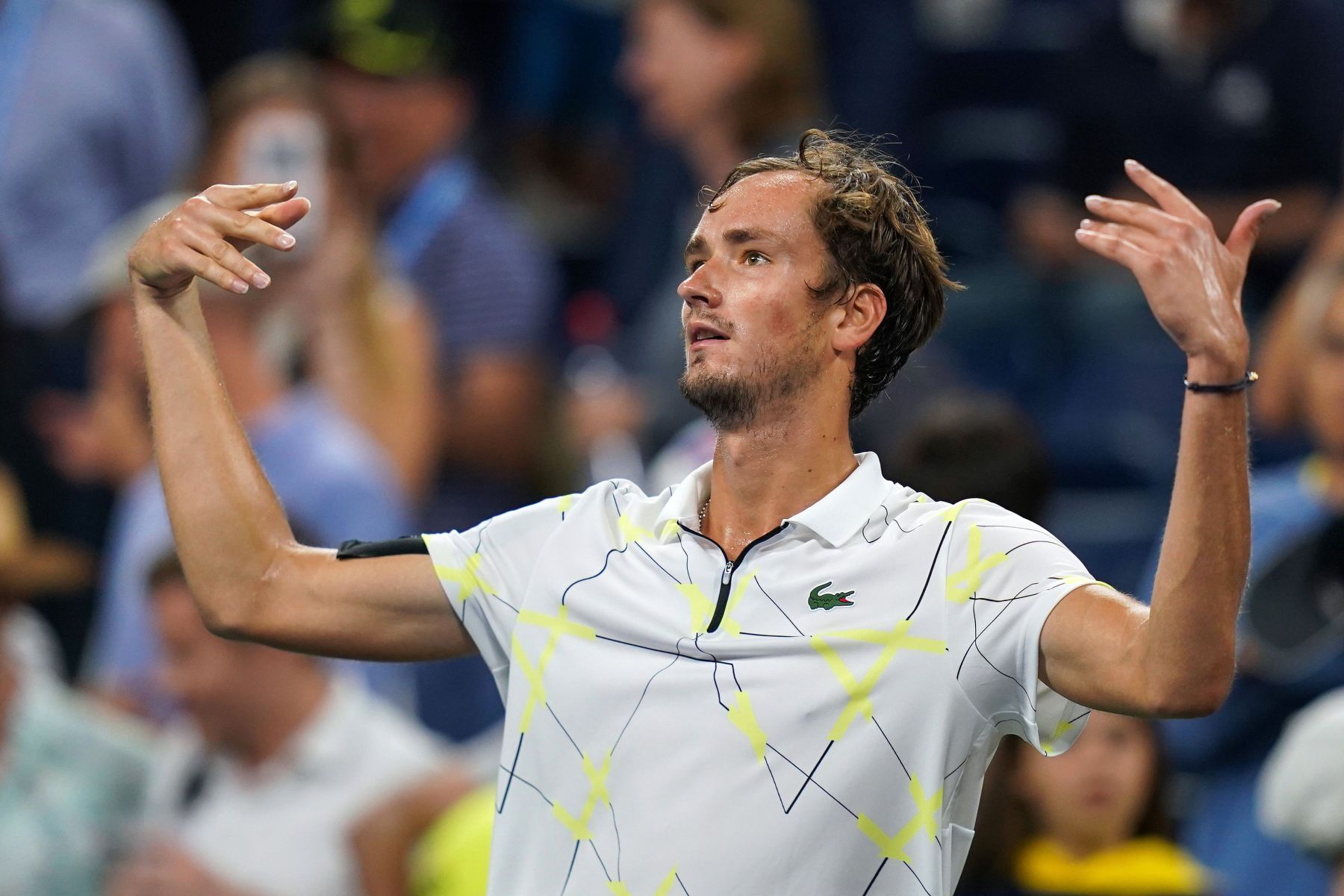 Daniil Medvedev won friends and enemies for his performance at this year's US Open
Dominick Reuter/AFP/Getty Images
By Walker Loetscher / September 10, 2019 8:45 am

The last 16 years of the ATP Tour will be remembered, talent- and achievement-wise, as the single greatest stretch in the history of tennis. Three players — Roger Federer, Rafael Nadal and Novak Djokovic — have claimed 54 of a possible 64 Grand Slams, thus propelling themselves into an echelon that did not exist before them, and likely will not exist again for a very long time.

The win will reignite all sorts of tired narratives about which tine of the great men’s tennis trident will eventually be remembered as the strongest, or whether, in fact, such a debate even matters. But for the first time in a long time, the biggest storyline to come out of a Grand Slam may instead focus on one of the other guys: the impish, lanky Russian who barnstormed through the entire summer hard-court swing of the ATP calendar before falling agonizingly close at the finish line.

Why? Because Medvedev is not only talented, but also promises to give the tour something it’s been missing for a long, long time: a truly great heel to foil and flummox all its persnickety, rule-following, image-obsessed good boys.

To understand the importance of the heel archetype in tennis, you’ve got to go back, way back, to the late ’70s and early ’80s, when perpetual ne’er-do-wells and rabble-rousers like John McEnroe, Ilie Nastase, Jimmy Connors and Ivan Lendl first came to the fore. As irascible as they were talented, these players brought a sense of theatrics to a sport mired in more than a century of Patrician etiquette and solemnity. They played exciting tennis, first and foremost, but compounded it with a level of showmanship more commonly associated with boxing or professional wrestling: trick shots, broken racquets, arguments with chair umpires, barbs exchanged in between points or through the press. It’s no coincidence that ratings skyrocketed throughout the era — tennis’s one true Golden Age — with players becoming outsized celebrities who mingled with rock stars and Hollywood A-listers when they weren’t on the court.

In Federer, Nadal and Djokovic, the men’s tour has essentially had its own version of Michael Jordan recurring three times in the space of 15 years, with each one’s career overlapping the one(s) that came before it. But they all lack something that Jordan, like tennis’s erstwhile bad boys, had in spades: the ability to transform into an utter and complete asshole.

It’s why noted enfant terrible Ernests Gulbis once called them “boring,” adding that, “tennis today badly lacks characters.” And he has a point: Federer and Nadal, especially, have always interpreted the whole “gentleman’s game” thing at its most literal, regaling sponsors and fans with canned speeches at every trophy presentation, win or lose, and demurring when confronted with questions that are even remotely controversial in press conferences. Djokovic, for his part, has the heart of a heel — he’s just learned not to indulge it. Early in his career, he was famous for winding up crowds, faking injuries and bantering with umpires, but he’s tried to rebrand himself as a more enlightened, even-keeled player with age, perhaps desperate to be revered in the way his two chief rivals are.

There have, of course, been moderately great players who engaged in the dark arts since the heyday of McEnroe, Connors et al. Lleyton Hewitt always wore his emotions on his sleeve, for better or — more often — worse. Marat Safin reportedly smashed 48 racquets over the course of the 1999 season alone. Even today, the tour has a pair of engrossing young malcontents in Greece’s Stefanos Tsitsipas and Australia’s Nick Kyrgios. But none of those players ever ascended to the levels of true, transcendent superstardom. On the evidence of the last two months, Daniil Medvedev might.

Let’s review Medvedev’s 2019 for reference. He entered the year ranked number 16 in the world, five spots behind fellow Russian Karen Khachanov, a big-hitting baseliner in the mold of Safin who has often been touted as the country’s next great player. He lost in Melbourne in a four-set match to eventual champion Djokovic, but has since gone on to beat him twice. He performed well during the clay-court season, making the semifinals in Monte-Carlo and the final in Barcelona, but he was knocked out early at both the French Open and Wimbledon in hard-fought five-setters.

Then came the vaunted North American hard courts, the ATP’s proverbial ringer, when season-long fatigue starts to set in and brutal temperatures and humidity send a lot of players limping toward the training table. Medvedev bucked that trend, losing two finals (to Kyrgios in Washington and Nadal in Montreal) before winning a third, this time in Cincinnati, to claim his first Masters-1000 title. Heading in to the Open, he’d played an astonishing 16 matches over the course of just three weeks; by any stretch of the imagination, a run in Queens seemed improbable.

But where others have stumbled, Medvedev roared to life, knocking out one foe after the next. Of course, if you were following Medvedev throughout the Open, you know that winning matches wasn’t the only thing he was doing. He also covertly flipped off an umpire, threw a towel at a ballkid and then cast aspersions at the crowd when they jeered him for doing those very jeer-able things.

This was par for the course for Medvedev. His ascent up the rankings — he now sits at no. 4, trailing only the three ageless ones — has been accompanied by a flair for ratings-worthy meltdowns. When he lost at Wimbledon in 2017, he questioned the umpire’s impartiality by literally pulling his wallet out of his bag and tossing money at her feet. A year later, he tried to confront Tsitsipas after a loss, telling him in comically Russian English to “shut your fuck up.” And the Russian thing, in general, is key to Medvedev’s essence: Americans yearn for their villains to hail from the Eastern Bloc, thus rekindling dormant Cold War enmities, and Medvedev obliges.

A funny thing happened in the later stages of the US Open, as Medvedev, standing on wobbly, taped-up legs from his endless summer, tore through the draw. The crowd’s jeers, once dead serious, turned lighthearted. The hostility of the early rounds became a kind of in-joke between player and fans, with Medvedev beaming up at them during his post-match interviews to remind them that their antagonism compelled him in moments when his weary body could not. (Medvedev even admitted after his quarterfinal victory over Stan Wawrinka that he considered retiring from the match due to a leg injury.) By the time he reached the final — and especially during the final, when Medvedev heroically crawled back from two sets and a break down to push Rafael Nadal to his very limits in a five-set instant classic — the crowd was exulting over Medvedev. Unfathomably, boos began to rain down on Nadal at moments in the fifth set, after he twice delayed Medvedev service games because the crowd was too unruly for his liking.

For his pièce de résistance, Medvedev delivered a thoroughly genuine and heartfelt speech after his loss, praising Nadal and the fans while reminiscing on a topsy-turvy couple of weeks in New York. He was received with pathos and love, prompting some corners of the internet to wonder if he’d made a full face turn. But I think it’s more complex than that.

Despite his warm reception after the loss to Nadal, Medvedev will remain tennis’s new scoundrel. There will be more blowups, more arguments, more finger-wagging from the media. But there will also be triumphs. Lots of them. Medvedev is, above all, a generational talent on the verge of a breakthrough. And fans will happily vacillate between embracing him and admonishing him, because deep down, they don’t actually want someone to hate. They just want someone human, someone relatable. The gods and their hegemony have ruled over the sport for far too long.