Why One Model Traded the Runway for the Race Track 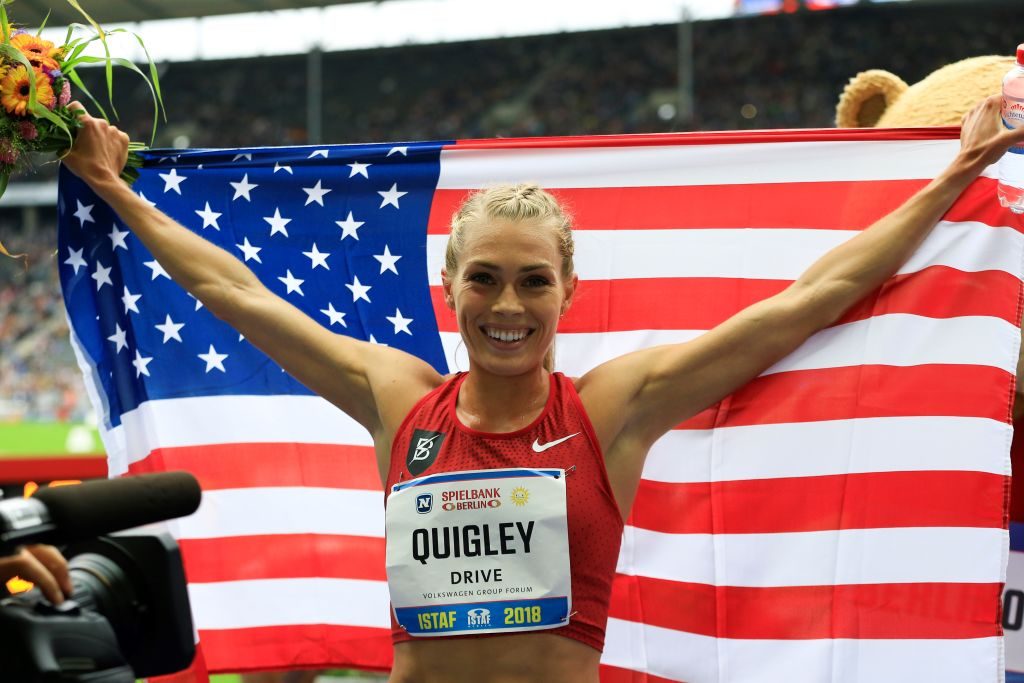 You have to walk, as the old saying goes, before you can run.

In Colleen Quigley’s case, she did both at the same time as a freshman at Nerinx Hall High School in St. Louis, walking the runway as a model while also running for the school’s track team.

With her father coaching her as well as accompanying her on modeling trips to places like Paris, London and New York, Quigley continued to be a dual threat on both the catwalk and track throughout high school.

“Traveling to see the world was something that wasn’t really an opportunity before modeling. That was my favorite part, just getting to see new cities and new places and explore the world in a way that I had previously never imagined being able to,” Quigley tells InsideHook. “I feel really lucky that I don’t have any negative experiences or bad stories to tell about being a young girl in a profession where I could easily get taken advantage of or be put in a bad position. With running, I loved being part of the team. Just being a part of a group of girls who I really felt like I had a lot in common with. We worked hard together and being able to contribute to that team as a leader was really rewarding for me.”

When the time came to decide what she was going to do after graduation, it was a tough decision for Quigley, 26, and her parents. In spite of being runners themselves, they would have supported whatever she chose to do. Ultimately, Quigley decided to go with cross-trainers instead of high heels and accepted a scholarship to go to Florida State instead of moving to New York to make it as a model.

“I feel really strongly that I listened to what my heart was telling me to do and I’ve never regretted that decision.”

“The thing that tipped me over to running was just the pride and sense of satisfaction and joy that I felt from my success,” Quigley says. “Running felt way more in my control and something I could feel proud of because of what I’d achieved and accomplished as a runner. The things I accomplished as a model were like, you know, I’ve made it in the pages of Seventeen or Glamour, or I did a campaign with Tommy Hilfiger or walked the runway for so and so. That was cool, but I didn’t feel like, ‘Yeah, heck yeah, I did that.’ It felt more just like I had good genes and society felt the way my face looked was appealing and that’s why I got the gig.”

Which isn’t to say modeling is wholly without merit, as Quigley, who competed in the 1,500-meter, mile, steeplechase and relay events at FSU, points out that it actually does share some similarities with competing on the track.

“If you’re the only model on-set, everyone’s looking at you to perform and do a certain thing,” she says. “They might be asking you to do something kind of challenging, like physically hold poses for a long time or do some crazy jumping thing while meanwhile paying attention to keeping a relaxed face and pretty arms. It does feel like they have paid you to do this and you need to give them what they need and do your part of the job. That’s definitely similar to when you’re on the track and everyone’s looking at you and people at home are watching on TV. You’re there to do a job. I think in both, you just have to block out the noise, block out the crowd, block out all of the people who are on set and just focus on the task is at hand. In both scenarios you practice so much. It’s like, ‘Okay, I’ve done this before, I’m going to do it again. I just need to do what I’ve been trained to do.’”

The former All-American has been able to put that training to good use in her post-collegiate career as a member of the Oregon-based Bowerman Track Club, the running organization she inked a deal with in 2015. The following year, Quigley ran the 3000-meter steeplechase at the Summer Olympic Games in Brazil, finishing eighth.

And Quigley is not content with that finish in the slightest as the goals she’s shooting for as a runner have only grown larger as her experience within the sport has increased.

“When I went into 2016, I thought I’d call myself an Olympian and move on. You know, I didn’t really understand how I was going to get hooked and get addicted to this being like a lifestyle and a career for the long-term,” she says. “I really want to make the team again in 2020. That’s never a given, but I feel like I’m at the point now where I can that’s kind of too small a goal now. My next goal is to be in the running to get a medal at the Olympic games. I don’t want to just go and check the box and say I ran there. I want to compete against the best of the best. So that really makes me put on a brave face and dig deep on days where I need to push myself just a little extra.”

For an athlete who’s trying to make it as a distance runner, digging deep is a full-time job.

“I feel like one thing people don’t really understand is how much of a year-round job, for all four years in between the Olympics. it is,” she says. “For distance runners, it’s so much of an aerobic thing that you can never let yourself take a break. You couldn’t take a year or two off in between the Olympics and expect to get back into the shape that you were before. We have like two weeks off in the winter or in the fall at the end of our season. So it has to be a labor of love and something you are passionate about and really enjoy doing because you spend your entire life dedicated to it. So I feel lucky I’m part of the Bowerman Track Club where I have 11 or 12 other women by my side every day that I can train with and spend my life with. Otherwise, it would be really just a very tedious and very lonely experience.”

Now, with a trip to the 2016 Summer Olympics already in her back pocket, a spot on the 2020 team within grasp following September’s World Championships in Qatar and a shot at the 2024 team possibly gleaming on the horizon, Quigley wouldn’t change a thing.

“I have to say, I’ve never looked back. I finished my freshman year at Florida State and I remember just being like, ‘Thank God I made the decision that I did because this was the best year of my life.’ I just couldn’t have imagined doing it any other way,” Quigley says. “Who’s to say, you know, if I chose the modeling thing I would’ve felt the same way. Who knows? But I feel really strongly that I listened to what my heart was telling me to do and I’ve never regretted that decision. I wish I could do what I’m doing and be closer to my boyfriend or be closer to my family but that’s just a sacrifice we have to make to be a part of the group and be a part of something really special. But yeah, I don’t know. I don’t think I’d do it any other way.”