Fish not biting in the cold? Stunning scenery will still make the trip to these spots worth it.

Here’s a thing universally understood by even the most amateur of anglers: Much of the time fishing—most of it, in fact—a sunk line is still and silent, taut only from the ebb and flow of currents beneath the surface. Hours trickle with few nibbles to show for time spent, and, barring exception for commercial or professional fisherman, landing the perfect catch every other cast is scarcely the point.

Fishing is about connecting with friends, the Earth, and the self. During winter months otherwise spent indoors, ice fishing elevates this distinctive connection and provides a unique adventure and escape. There’s the sitting on four inches of frozen water, atop hundreds of feet of decidedly not frozen water. Then there’s the tantalizing possibility of bagging a tasty trout, perch, or whitefish. Unless you’re a black diamond skier, it’s arguably the most exciting thing you can do all winter—and the most time you’ll spend outside the confines of your home. Take a look at our round-up of where you can find some of the best ice fishing the world has to offer, and what you should be casting for once you get there.

The Lule River in Sweden originates near the Norwegian border and is teeming with some of the tastiest salmon and trout you can find in Scandinavia. During the rest of the year, the river’s “hot areas” are only reachable by boat. Not so in winter, when the ice is secure. Take a look at available accommodations, licensing and bait here. 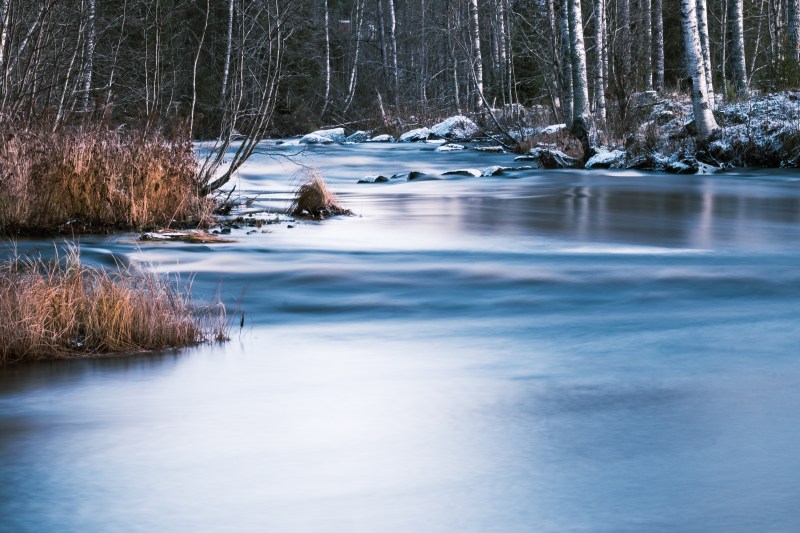 The state of North Dakota sure knows how to sell this lake. Touting it as “a fishing destination unlike anywhere else,” the tourism board brags that its fish are large and healthy, its winter season is long, and the “huge” size of the lake means you can avoid tangling your lines with any other overeager anglers. Grab a 3 or 10-day license to search for jumbo perch, walleye and big pike. 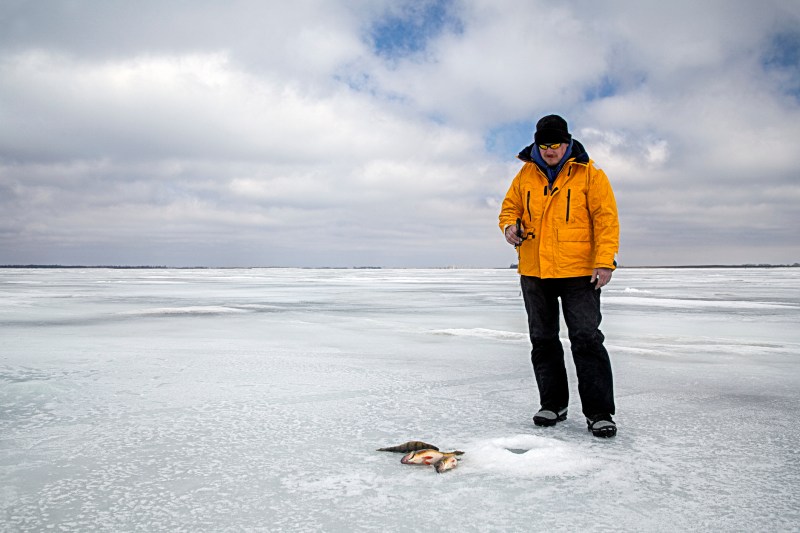 3. Lake of the Woods, Minnesota

Welcome to the self-proclaimed Walleye Capital of the World, and perhaps the most commercialized location on this list. We say that affectionately, though— Lake of the Woods has the accommodations and resources to turn an ice-fishing trip into a full-blown vacation, complete with snowmobiling and cross country skiing for anyone who isn’t keen on staying on the ice all day. We don’t know why they wouldn’t, though — there are dozens of pre-heated fish houses, and if you opt for a sleeper fish house, there’s a chance you can glimpse the Northern Lights. 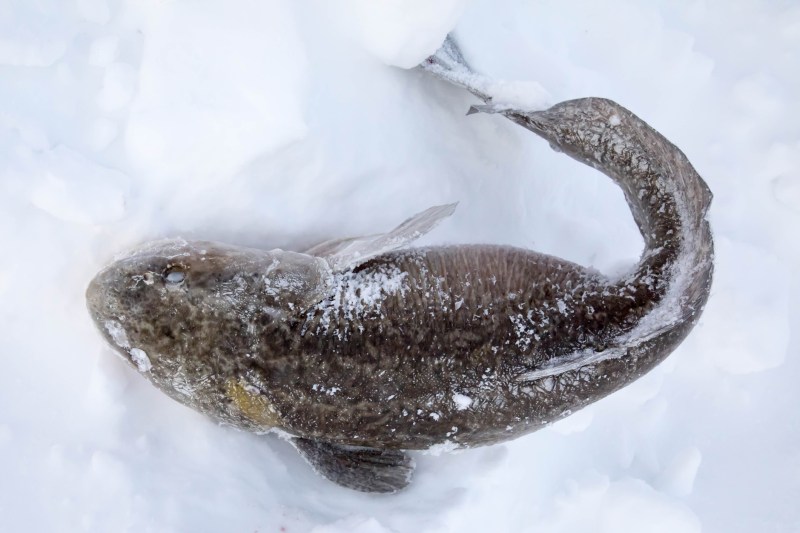 This is a locale reached best by snowmobile, and this secluded spot in Canada’s Kluane National Park & Reserve is the only part of the park that allows open fires on the ice surface. While anglers describe the trout as “medium-sized,” the sheer amount of them “more than makes up for it.” Expect to have a busy day on the ice, with an afternoon barbecue to boot. 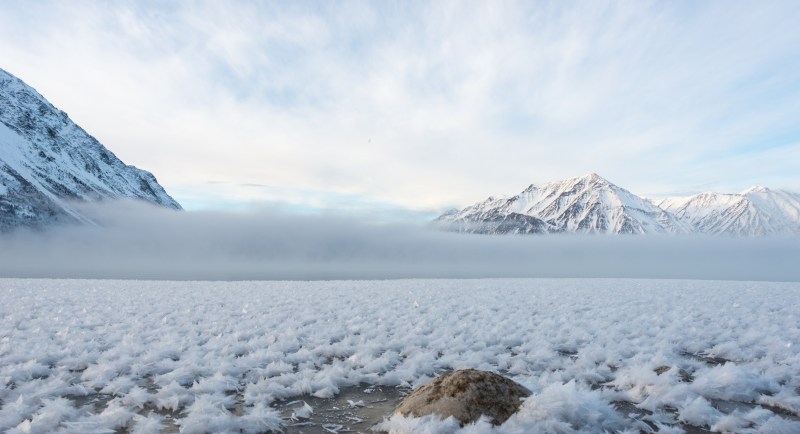 Vermont is a lovely place to visit, with the type of hospitality you’re more likely to encounter in the Midwest or the South. In addition to a warm welcome, you can expect to find a healthy variety of fish in Lake Champlain on its western border with New York. Boasting bluegill, perch, pike and the occasional walleye, the winter fishing season is open from January to March 15 every year. Shanty rentals with optional wood stoves inside are available for rent, and it’s not hard to find gear if you need a little something extra. 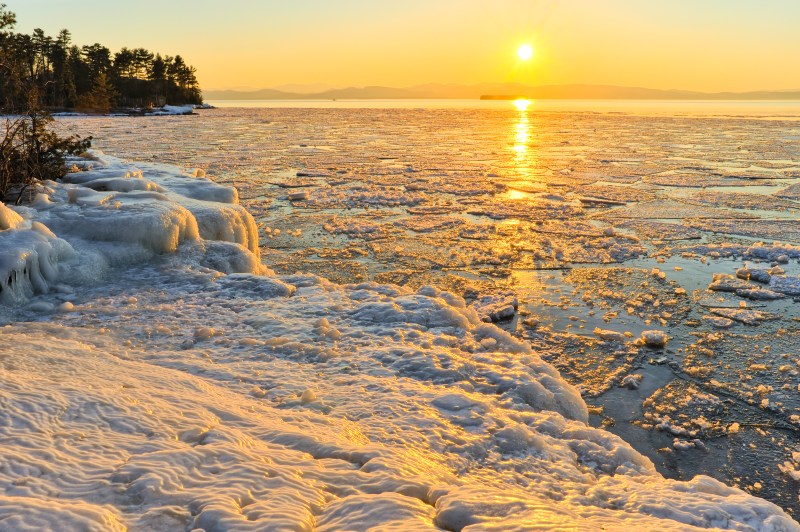 If you glance at a Google Map of this lake, you’d be forgiven for feeling overwhelmed. Fishing huts, fishing outfitters and fishing charters pepper nearly every inch of shoreline—and that’s for good reason. Known for jumbo perch, whitefish and pike, the real holy grail here is the Lake Simcoe lake trout, and there are plenty of places on the ice to drop a line. Starting in January, you can fish seven days a week, in deep or shallow water, in the open, in a hot box hut, or even an ice bungalow if you’re keen on sleeping on the water overnight. Not far from Toronto, this is a perfect international jaunt for a mid-level angler. 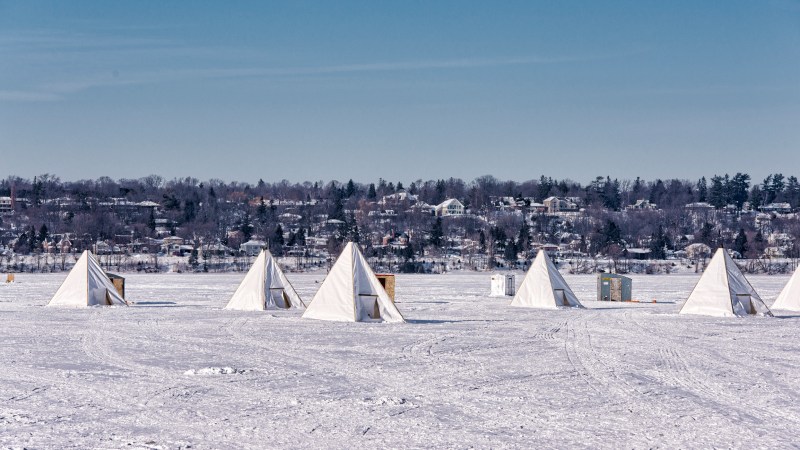 This isn’t exactly the place to go for peace and quiet.

A reservoir operated by Denver Water, it’s described by locals as “truly a circus” on the weekends. But if you find yourself in Denver and want to skip away for a day to scratch your ice fishing itch, you’ll find plenty of trophy-sized fish waiting to be caught. Thanks to an abundance of freshwater shrimp, rainbow trout, brown trout, Snake River cutthroat, greenback cutthroat, cutbows, kokanee salmon, brook trout, and splake are all caught in the reservoir. Just make sure to find a break in the weeds, as the water can run a bit shallow, and no one likes to get tangled. 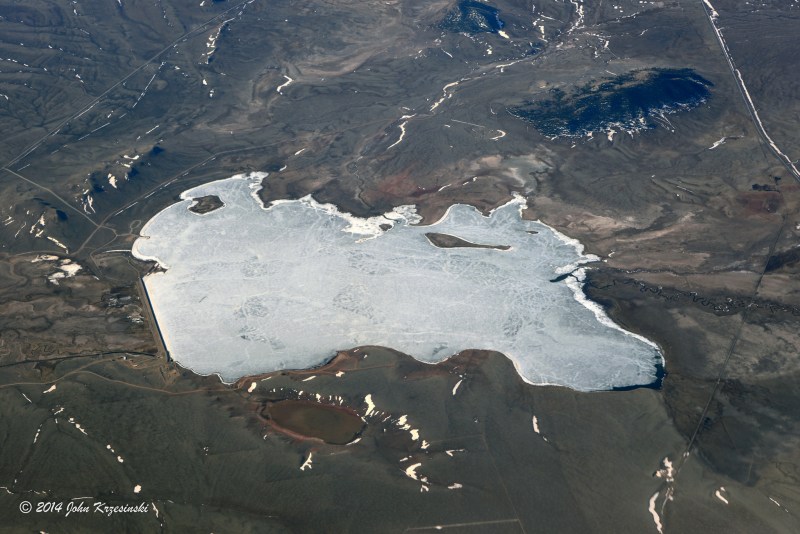 Coined one of the region’s “Big Three” lakes by the Alaska Department of Natural Resources, Birch Lake is the perfect place for novice ice fishers because there are a ton of “catchable fish” here. Rainbow trout, coho salmon, Chinook salmon, arctic char and arctic grayling are present, though the grayling is fairly rare. The ADNR says this is a good place for introducing children and older people to ice fishing, so if you were considering a place to make ice fishing a family affair, this is your spot. 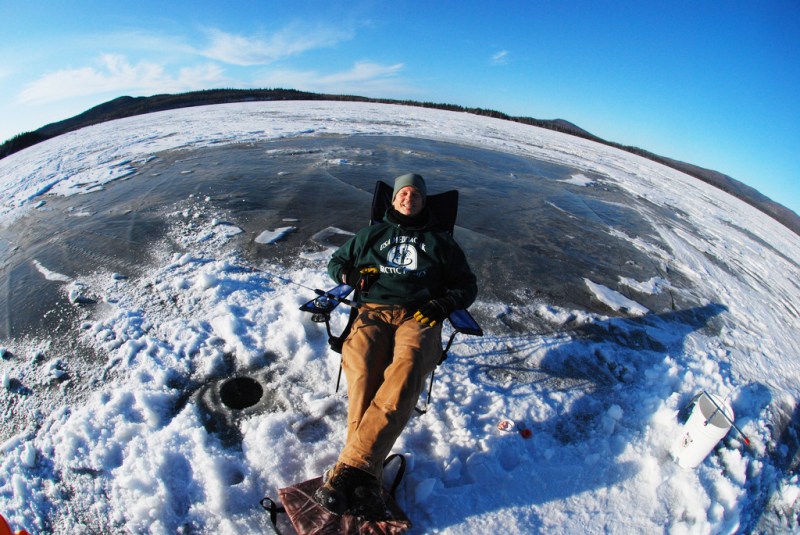 Fort Peck Lake in Montana is huge: There’s no way around it. You’ll find more than 1500 miles of shoreline, depths that stretch to the 200-foot mark, and more than 50 kinds of fish in the reservoir. It’s the fifth largest man-made lake in the country, with only one major drawback: It’s not close to much of anything. The closest town, Jordan, has a population of less than 400 people, and the lake isn’t within a half-day’s drive of any major cities or airports.

But Fort Peck’s remoteness is part of what makes it so incredible. Lax regulations mean you can go a full 24 hours between tip up checks (tip ups are a device that let you fish multiple spots simultaneously; the rig sits over the hole and a flag pops up if you hook a fish). Also, tip ups can be spread as far and wide as you want, but there is a limit of six per angler. However, Fort Peck is known for having pressure cracks and thin spots at various parts of the lake, so this site isn’t for novice fishers. Talk to locals, pay attention, and bring a depth sonar. You won’t regret it. 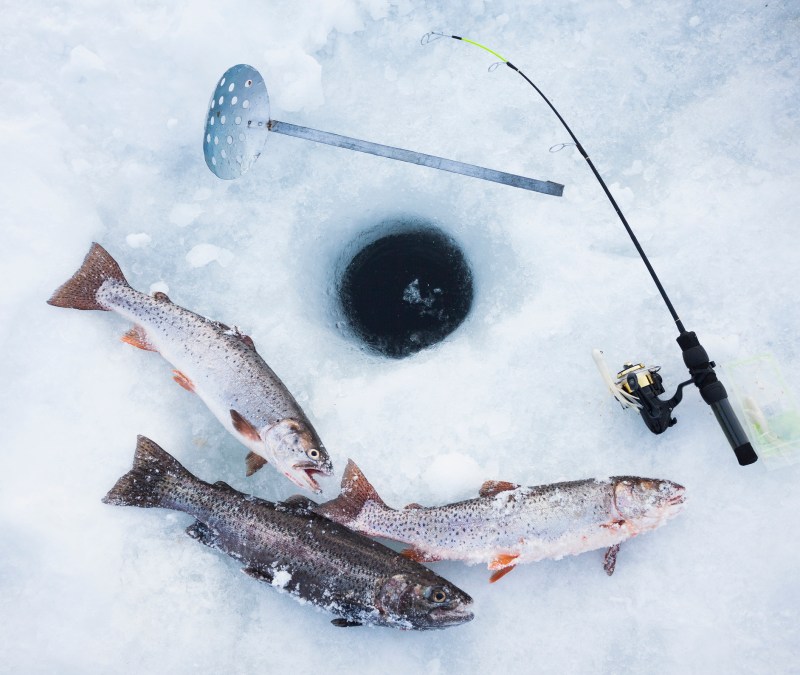 Contrary to popular belief, you can ice fish in California, and Caples Lake is a perfect (and accessible) place to do so. Rainbow and brook trout are plentiful in this locale, situated high in in the Sierra Nevada mountains near South Lake Tahoe. For productive baits, ESPN recommends you use Rapala ice jigs, small Crippled Herring, Megabait Live Jigs, Gold Label Balls O’ Fire eggs and nightcrawlers. For more of a challenge—and a less developed spot— hit Silver Lake, just 10 miles away. 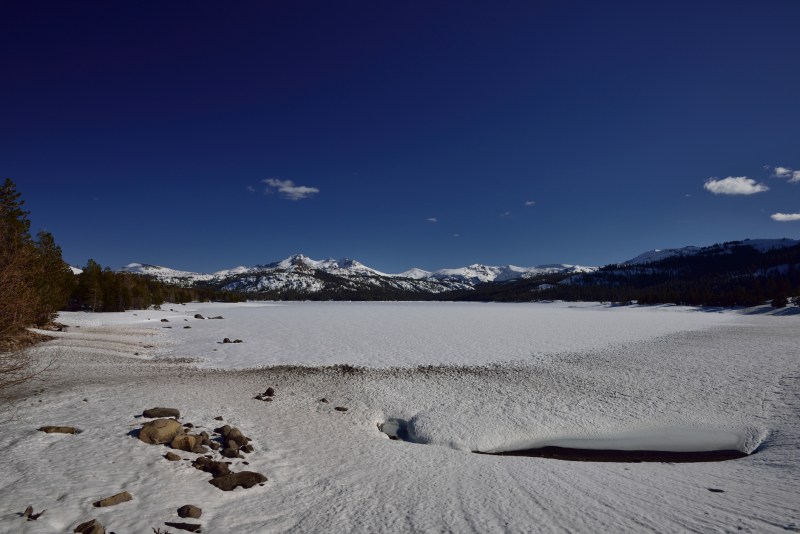