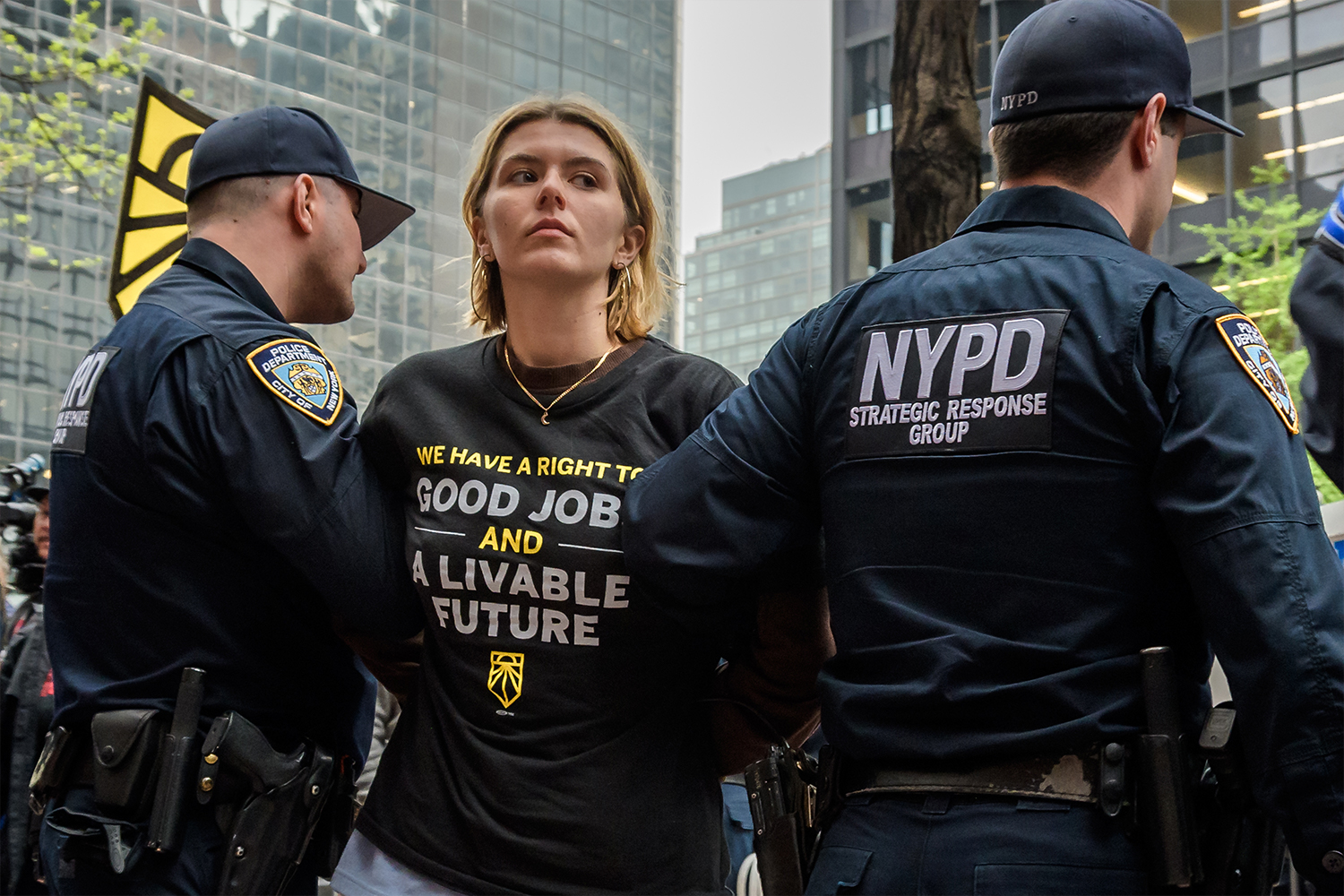 Is that a radical statement? It shouldn’t be. The science is clear, and has been for some time. The only thing that hasn’t been evident is the amount of damage we’ve caused (new research is released almost daily proving it’s worse than expected) and how much time we have to fix the problem.

Many adhere to last year’s UN report that states we have until 2030 to limit greenhouse gas emissions to keep the average global temperature increase below 2.7 degrees Fahrenheit. If not, there will be massive food and water scarcity, more species loss, more sea-level rise, further ocean acidification, more extreme weather events and sweeping poverty, for starters. Another report released by the U.S. a month later corroborated the main findings and put a price on unchecked climate change: a 10% decrease in the American economy by 2100.

So why are Americans in particular afraid to acknowledge this fact? There are many factors. The most troubling isn’t just the lack of belief in scientific consensus on the part of politicians in power, it’s their attempts to hide the science from the public. (It’s working.) On a larger level, it’s very easy to dismiss the relatively new realization that is human-caused climate change. It’s easy for Republican Senator John Cornyn to ignorantly tweet “It’s summer, Chuck.” It’s much, much harder to convince both the powers that be and the voting public that we need to take unified, radical action to solve this crisis.

So if the scientists haven’t been able to single-handedly change minds when their findings are published in the media, and politicians have shown they won’t use legislative measures to change them, where else will can we turn? And who else is going to fight for us and the planet? The answer: Social media, and the eco-warriors who are uploading viral content to it.

Will viral videos — originally the domain of cats and dance sequences — save humanity from climate change? No, at least not directly. But over the last few years, the capacity of platforms like Facebook, Twitter, YouTube and Instagram to incite massive societal reframing has been undeniable. Case in point: Plastic straws, and how you can’t drink from one without thinking about the campaign to ban them. But environmental issues larger than straws have found a home on social media, and the photos and videos behind them are having a bigger impact than ever — and coming from more unexpected places.

We set out to look at three different individuals and organizations fighting for climate change action in their own ways, from a nontraditional educator to youth activists to a professional storyteller. To borrow from Shakespeare, some of these people were born viral, some achieved virality and some had virality thrust upon them.

How you know him:

A video on Twitter of him helping a sick coyote.

How you should know him:

His YouTube channel, which he calls “a low-brow, crass approach to plant ecology as muttered by a misanthropic Chicago Italian.” It’s a refreshingly professional introduction to the scientific study of our planet, but done in an engaging way no streaming service could have devised. He’s like Bill Nye for the Snapchat generation.

Why did you decide to start making these videos?

“I just want to get people interested in plants and make them realize that you don’t need this ivory tower experience. Plant biology — and this goes with any kind of biology or science — we live in the age of the internet, you can teach yourself these things … There’s so much more to the world than just working this shit job, smoking weed or drinking a beer after work to just calm down, then wasting your time watching TV. Instead, you can actually [learn], there’s just so much to learn.”

What do you think about your recent viral fame?

“I never considered myself viral until that obnoxious coyote video came out and I guess that kind of makes me want to die at this point when I think about it. I wouldn’t say die, throw up is more appropriate I guess … I study plants and plant ecology, so it’s not just some corny horticultural perspective I’m coming from. It’s basically wild plants and their evolution and their ecology and that … does not make for good material for social media or ‘viral accounts,’ just because most people want style, not substance.”

Are you optimistic about climate change?

“I’m not optimistic, no. But then there’s also just the attack on science in general. Just the right wing measures of austerity and cutting budgets. I mean, we’ve defunded science and education to such an extent in this country. I don’t understand it. Education and science benefit everybody. They benefit the common good. They advance us as a nation. Why do you want to detract for most things? That’s all we have. That’s all we have to understand the world around us.”

How you know them:

How you should know them:

As leaders in the promotion of the increasingly popular Green New Deal legislation.

“Sunrise is a movement to stop climate change and create millions of good jobs in the process. We’re building an army of young people to make climate change an urgent priority across America, end the corrupting influence of fossil fuel executives on our politics, and elect leaders who stand up for the health and wellbeing of all people.” — Sunrise, via their website

What was the aftermath of the video with Senator Feinstein?

“We used that as an online organizing tool, and we were able to reach out and speak to a lot of young people through that video who were seeing themselves in the young people who were confronting Feinstein. They saw Feinstein who, in that moment, came to represent some of the people in both parties who are standing in the way of progress. That’s how we reach people.” — Victoria Fernandez, Co-Founder and Internal Organizing Director, in an interview with Rolling Stone

How effective has this youth-led group been?

“No members of Congress gave a shit about what we did before we occupied Nancy Pelosi’s office, and now we’re one of the most influential groups in the progressive movement that almost every single presidential candidate has reached out to before releasing their climate plans.” — Evan Weber, Co-Founder and Political Director, in an interview with Vox

How you know him:

A National Geographic video of a starving polar bear. In this original version, the opening caption reads: “This is what climate change looks like.” That statement was corrected, because there was no way to tell if climate change was the one cause of this specific bear’s starvation. In fact, the issue of polar bears has been used by climate change deniers, but Nicklen is dedicated to showing the real-time effects.

How you should know him:

He’s one of the most influential nature photographers of our time.

“Essentially, bears are designed to go on land for long periods of time. They can be on land for two months and not eat a meal. But they’re not designed to go four or five or six months on land without eating any food. And that’s where we’re starting to find emaciated bears, dead bears. You know, in Alaska, in the Beaufort where there’s really — ice has taken a beating, especially that multi-year ice that lives for many years, they’re finding dead bears floating out in the sea.” — Nicklen in an interview with Fresh Air

Why is it important to see the direct effects of climate change on animals?

“Well what we do know for sure is that the science is essential and without scientific data there’s no way to get the credibility needed to illustrate the severity of certain environmental issues. But we’ve proven over and over that science isn’t going to get people feeling that immediate connection to these issues … We realize that not everybody is going to see the Arctic Ocean or Antarctica and it then puts photographers, journalists and storytellers in a position where they are communicators here to reach the world, and it’s actually a very exciting time if you think about how many communicative channels we have available to us now that have been created over the last five to ten years.” — Nicklen in an interview with Hobo

How optimistic is he about climate change?

“I think Trump has actually been good in waking up the world, to realize they can’t just sit there waiting for politicians to do everything for them. But when I look at places like the polar regions, I get very worried. When you look at places like Miami, and they’re putting the $14 billion retaining wall around the city because of rising sea levels, and yet they’re still denying climate change. But there’s a lot of smart people out there working on really smart solutions. These things are happening, just not happening fast enough.” — Nicklen in an interview with Rolling Stone