On the Eve of a Lockdown, SF's Legal Cannabis Industry Boomed 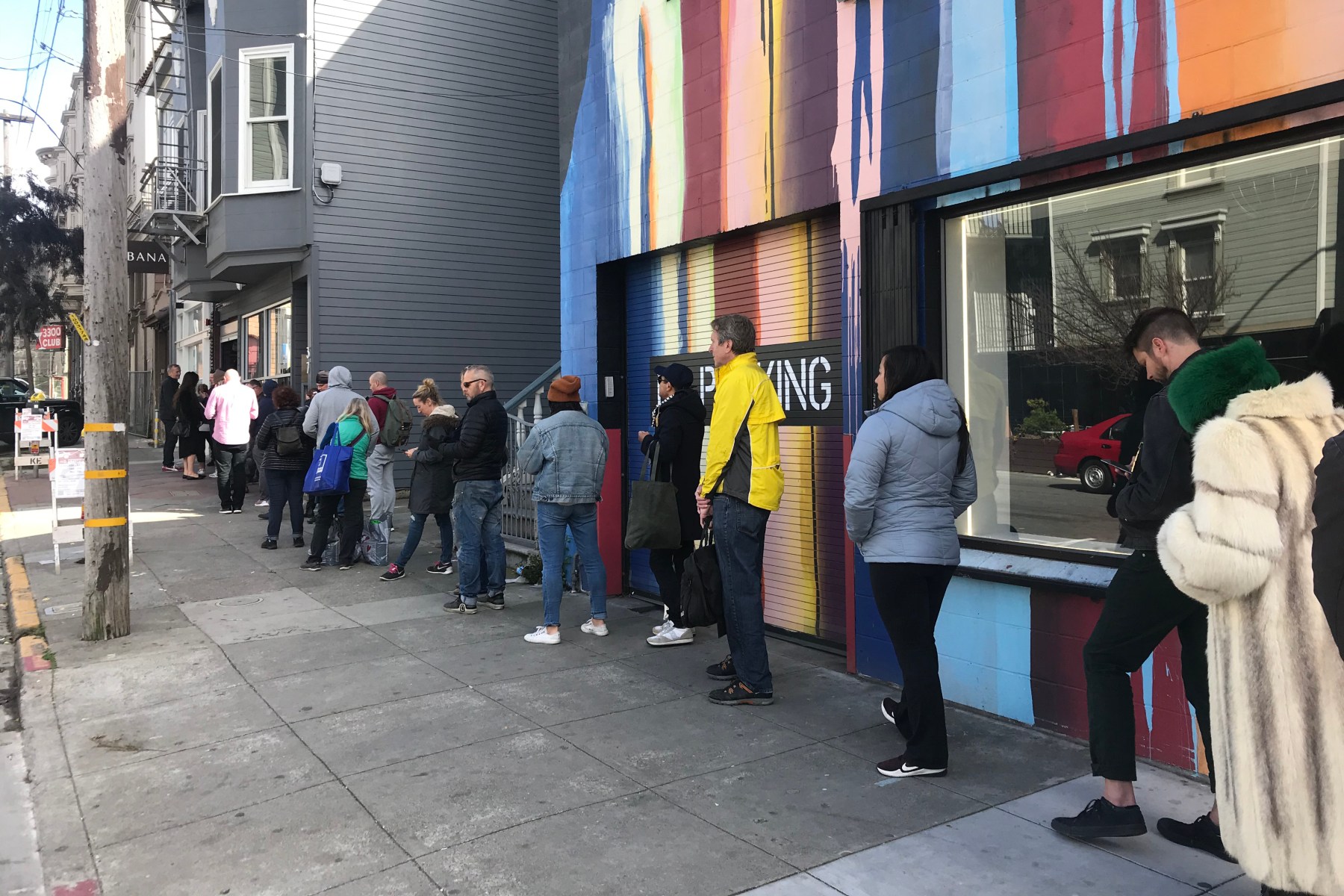 A line gathers outside of Urbana, a recreational dispensary in Bernal Heights
Barry
By Diane Rommel / March 19, 2020 9:51 am

You have milk, eggs, bread, butter, hand sanitizer (just enough), Easter candy (we’re not going anywhere) and paper towels (unless you live with me, in which case you realize that after five trips to the grocery store, you do not, in fact, have any paper towels, at all).

But do you have your recreational cannabis?

This was the question faced by literally millions of people in the Bay Area earlier this week, as denizens settled however anxiously into their own couches following a shelter-in-place order decreed by local officials.

Barry, who lives in San Francisco, realized he did not — and so became one of thousands of Californians spending Monday afternoon in line. It could have been worse. He could have been in Culver City, waiting for ammo. Instead, he sent InsideHook photos from the back of the line at Urbana, the Bernal Heights dispensary.

“Are there actually different categories?” Barry says, when asked by a reporter (that’d be me) to characterize his pot consumption. “I wouldn’t say I use it a lot — I’d say I’m a occasional user.”

While he’d already curtailed his social activities early last week, Barry spent a solid chunk of the weekend stocking up on essentials. The length of the line at Rainbow Market, he said, kicked his stockpiling into a higher (though still reasonable) gear: “People were really stocking up for the long haul, buying loads of non-perishable items, spending hundreds and hundreds of dollars,” Barry says. “I was just there to get butter and some snacks!”

“There are three dispensaries in Bernal Heights, and at first I passed one I tend not to patronize,” Barry says. “It’s not the Tartine of dispensaries — but it had a line. So I knew that the one I do go to would definitely have one.”

Indeed: a line down the block and a 45-minute wait. Barry says the mood was generally “pretty cheerful,” except for one minor disagreement when a passerby took photos of people waiting on line — a rude thing to do whatever the circumstances.

An hour later, Barry returned home, edibles and “a variety of pre-rolled joints” in hand. I ask him if he’ll ration his stash, like we would ration our paper towels, if we had any. “Honestly I just wanted to have them on hand — I’m going to be at home for an extended period of time, so it’s just a way to stay relaxed, take it easy, take the edge off,” he says, safely returned from his trip into this new, strange world — even if it rankled in a familiar way.

“I’m a native New Yorker, and we hate to stand in line — they love it out here!” he says. (As a non-native but longtime New Yorker, Barry is 100 percent correct on both counts.) “I’ve always said, just go somewhere else! Or not at all. Or wait until tomorrow.”

Except for now — normal tomorrows, like most everything else, are in fearsomely short supply.