40 Years Later, DEVO Turns Out to Have Been Proven Right

Unlike Weezer, these rock icons gave us "Satisfaction" from their powerful cover.

All that Weezer/Toto outrage has got me thinking about covers, specifically Devo’s extraordinary version of “(I Can’t Get No) Satisfaction.”

As it happens, the album that featured this song, Devo’s startling debut, Q: Are We Not Men? A: We Are Devo!, turned 40 just a few days ago.

To recap, Weezer’s “Africa” cover is a cynical abomination made by people who despise you, despise the power of song, even despise their own abilities. Weezer wanted to prove, with a certainty as gigantic and rancid as ten square yards of moldy dry wall, that the lack of originality and utterly empty histrionics prevalent in today’s shrill epoch of Jennerdashian tantrums and TV singing contests would elevate a soul-less clone of a song to the top of the heap.

But back to Devo.

The original “(I Can’t Get No) Satisfaction” (released by the Rolling Stones in August of 1965) is about the temporary frustration of a spoiled, confident, and entitled person. The Stones, stupidly, selfishly, make frustration sound sexy.

Even when disappointed, Mick Jagger makes sure that you know all the things he has that you don’t have: The narrator has a car. The narrator goes around the world, doing this and that. The narrator is superior to the people he sees on TV who try to sell him things. The listener has zero doubt that Mick’s Lack of Satisfaction is just a speed bump on the way to his next conquest. The Stones treat dissatisfaction as something that is a challenge to their good fortune, their arrogance, their dominance; they treat it as a Medici might treat a servant.

But Devo’s “Satisfaction” (track two on Q: Are We Not Men? A: We Are Devo!) is an exploration of impotence — sexual, yes, but mostly social, economic, and political. It is not the sound of an upper-class rockstar huffing and puffing because of a temporary setback. Devo take the song out of it’s childish romantic/sexual context, and make it a ferocious declaration about the state of the modern world and a (very) small man’s place in it.

Devo’s (lack of) “Satisfaction” is about work, parents, dead end jobs, life in a dying industrial town, the inevitability of disappointment, the inevitability of a dreamless death. It communicates both a rage at the world and an awareness of the futility and impotence of that rage. Devo’s narrator is so oppressed by his environment, his job, his bank account, his parents, that not only can he not find a girl, he couldn’t get it up with her if he could.

His losing streak is his whole life. 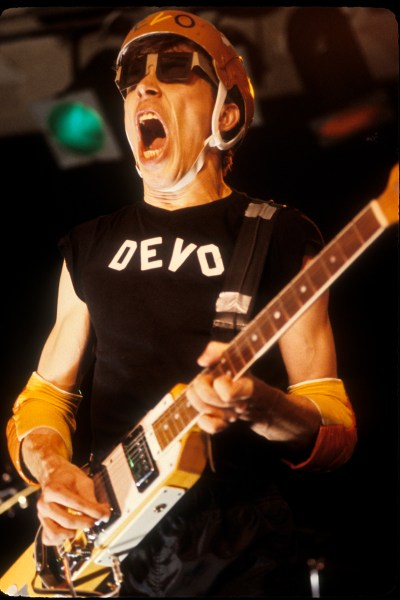 Bob Mothersbaugh performing with Devo at the Old Waldorf in San Francisco on November 20, 1978. (Photo by Clayton Call/Redferns)
Redferns

Devo’s version of “Satisfaction” is the keystone to a sharp, affecting and coherent concept album about living a life where all dreams will die and escape is impossible. Q: Are We Not Men? A: We Are Devo! explains that any effort to break out of this cycle of disappointment and dreamless despair will end in humiliation, disappointment, even death. The consistent theme of the album is rage — evolving into impotence, and then sad resignation — about class status, dead end jobs, dying cities, and oppressive family life.

This theme is also a key to understanding the concept from which the band took its name. (Please note that although I have discussed this subject in some depth with Gerald Casale and Bob Lewis, the initial creators of the Devo/Devolution theory, this interpretation is somewhat my own.)

Devolution does not imply that modern man is devolving in any biological, evolutionary, or physical sense. Rather, the clock is turning back on more recently accrued characteristics like free will, freedom of choice, and class mobility. Modern man is losing the affectations of self-determination that were taken for granted in North America in the 20th Century, and is devolving, in essence, into a medieval serf. Q: Are We Not Men? A: We Are Devo! tells the story of man recognizing that he has devolved from an individual into a compliant cog in the machine.

They look inward, and find impotence and cowardice. This is another effect of Devolution: You beat up yourself, not your oppressor.

The theme of Q: Are We Not Men? A: We Are Devo! — the futility of moving out of your designated, and seemingly terminal, status as a cog in the machine – is evident throughout the album. “Come Back Jonee” (not a cover per se, but clearly an homage to “Johnny B Goode”) takes Chuck Berry’s rags-to-riches story as a starting point; but in Devo’s version, the dreams fed by arrogance, talent and hope are met with death, regret, and bereavement. “Sloppy” (which is so full of rage that it becomes virtually inarticulate) hints at both sexual impotence and couples ineffectually trying to use sex to balm and obfuscate bad economic and social decisions. Even “Space Junk,” which at first appears to be off-concept, addresses that in the future interstellar jobs will be just as dehumanizing and inane. That future doesn’t look much better forty years later.

The story arc of Q: Are We Not Men? A: We Are Devo! is completed on “Shrivel Up.” This harrowing song announces, with no room for misinterpretation, that not only is conformity a place where dreams die, but also that many people simply don’t have the option to fight it, due to economic realities or social pressure. “Shrivel Up” is a merciless, depressing song; it also neatly bookends the album’s opener, “Uncontrollable Urge” (which is not necessarily about lust, but just as likely about an incoherent urge to escape economic oppression and conformity). At the end ofQ: Are We Not Men? A: We Are Devo! we learn (via “Shrivel Up”) that this quest, the “urge” delineated in the album’s opening track, has failed; once again, dreams have been beaten down, and our protagonist will die at the same dead end job that killed his daddy.

Initial contemporary criticism of Q: Are We Not Men? A: We Are Devo! often focused on what was perceived as a robotic effect or lack of feeling.

Nothing could be further from the truth.

Q: Are We Not Men? A: We Are Devo! is a deeply and profoundly emotional album, an acutely empathetic piece about the death of dreams. It is a cycle of songs about Americans not only left out of the American dream, but unable to find a way in. Heck, it’s Nebraska in a yellow jumpsuit.

Which is all to say:

It is all well and good to write a song about working class rebellion, and urge all the little kiddies to take up arms — or, at the very least, buy a t-shirt stating their intent to take up arms. However, it is much, much harder to compose an entire album explaining that you are too beaten down by the class system and the patriarchy to make any move at all.

Devo doesn’t minimize this story by proposing nonsense solutions, or shouting “Anarchy” in a crowded theater. Instead, they give you an accomplished, beautiful, but devastating account of the dehumanizing carnage in much the same way that photographer Dorothea Lange documented the wastes and ravages of the depression and the dust bowl.

And these lyrics from “Shrivel Up” could be from a Depression-era folk song:

It’s at the top of the list
That you can’t get pissed.”

From listening to that, I can get lots of satisfaction.