Taylor Swift and the Problem With Pop-Star "Documentaries"

"Miss Americana introduces us to a Taylor Swift reborn, if not quite as an artist, then definitely as a woman."
Kevin Mazur / Contributor
By Charles Bramesco @intothecrevasse

In Robert Altman’s 1975 film Nashville, Ronee Blakley gives a moving performance as ingénue superstar Barbara Jean. She’s the darling of the local country-western scene and a national name in music at large, but she’s not doing so well with the pressures of fame. When we join her as she’s being carted off of a private plane, she’s just survived an incident with a flaming baton that’s left her badly burned. She’s tremulous and infirm, prone to the occasional nervous breakdown, and liable to mentally drift off during banter between songs at her concerts. By the end of the film, she’ll be a casualty of her own celebrity.

While the character was explicitly modeled after Loretta Lynn, she fits into a lamentable showbiz archetype stretching back past Marilyn Monroe and Judy Garland. This is the tradition into which real-life Nashvillian Taylor Swift sorts herself through the early scenes of Lana Wilson’s new documentary Miss Americana. She frankly discusses the psychological impact that daily trolling by millions of online strangers can have on a person, going so far as to divulge that she struggled with an eating disorder when her personal health was at its worst. If she had fully succumbed to the gargantuan weights placed on her slender shoulders, she could’ve been another young star lost to a tragically premature end.

But that’s only the first-half of her story. Miss Americana introduces us to a Taylor Swift reborn, if not quite as an artist, then definitely as a woman. She’s learned the importance of self-care, and speaks with the steady clarity of someone well-versed in the vocabulary of therapy. After spending most of her adult life compulsively working to please the ever-increasing number of people reliant on her, she’s made peace with the fact that winning over everyone isn’t possible. When a creep sexually assaulted her during a photo op, she stood up against him and took him to court, where he got a guilty verdict and she declined any payout to make a point. We’re presented with a newly authentic Taylor, one willing to get opinionated and get real.

Most significant of all is her stand as a political actor, both the culmination and most resounding expression of her rise to new levels of self-empowerment and -actualization. In the 2018 midterm elections, in spite of her PR team’s protestations aired during a meeting Swift allowed Wilson to film, she spoke out against the blithely homophobic Tennessee senator Marsha Blackburn. Trump talks some weak-tea smack about Swift’s music and Blackburn ends up winning the election anyway, but the real victory here is one woman’s a-woke-nening. The film charts a clear, satisfying, faintly heroic arc for its subject.

And yet that’s precisely what it all feels like: just the latest narrative in the long series of narratives that have made up the course of her career to date. It’s a meticulously arranged hagiography, in a way damned by Swift’s seal of approval. Some reviews out of the Sundance Film Festival (where Swift gladly appeared alongside Wilson to promote the film at its marquee premiere) anticipated a response like this as “cynical,” and while that may very well be the case, it deserves to be articulated nonetheless: If there’s anything close studies of pop stars teach us, isn’t it that we should move through all things with a maximum of skepticism and a minimum of credulity?

Miss Americana submits itself as a more candid, levelheaded endeavor than such puff pieces as Katy Perry: Part of Me or Justin Bieber: Never Say Never. The image of the squeaky-clean girl-next-door type has been long since shed for gyration-heavy concert choreography and mildly spicier lyrics, but this is still Swift as we haven’t seen her before. She uses two words we’ve never heard her utter: in one soundbite delivered through the fourth wall to Wilson’s lens, Swift says her newfound liberation “feels so fucking awesome,” and in another, she makes a vague mention of “fascism” in America. Them’s fighting words, as they’d say around Swift’s vocally repped home state of Tennessee, and yet they’re difficult to take at face value.

As a colleague of mine smartly put it, “The function of any ‘authorized biography’ is to provide a tightly controlled space in which the revelation of new information about a public person can be frictionlessly inserted into their tightly controlled public persona.” Every heretofore unseen part of Swift that she shows to us positions her at a flattering angle. She exposes her vulnerabilities to provide context for how strong she’s been forced to become, and acknowledges her past of passivity to draw contrast with her present resistance. There’s nothing challenging, nothing daring, nothing penetrating about Wilson’s approach to portraiture.

It would come as a surprise if Swift did permit anything like that, considering how effortfully she’s managed her brand up to this point. The whole Sisyphean endeavor of her working life since that fate-deciding encounter with Kanye on the VMA stage has been to get one step ahead of public opinion. Each fresh album cycle brings with it a fresh pivot, from the girl-squad leader who’s so not about the drama (circa 1989) to the would-be villain embracing the role of the “snake” assigned to her by a faction of haters (circa Reputation). We know that she has a robust social life with an array of A-lister friends because she stages photos of everyone having fun at her annual 4th of July parties. We know that she and her boyfriends are very much in love because she posts photos of them giving piggyback rides or canoodling in front of artfully arranged piles of rocks. We see what she wants us to see.

What’s always made Swift a compelling character in the ongoing epic yarn of our era’s famous people is that though she may be savvy about marketing herself, that savviness has been evident in her chosen moves. The seams of her fabrications always show in a way that they don’t for, say, Beyoncé, who has withheld just about as much of herself from public consumption as Swift. Whereas the former Destiny’s Child star rose to the top by making being fabulous look easy (and why the fine detailing of her extreme lifestyle in the exemplary Homecoming landed with such an impact), Swift herself confesses to taking pride in trying hard. The “You Need to Calm Down” single release announced her as an official Hetero Ally to the LGBTQ community, and she populated the music video with such media-friendly personalities as Todrick Hall and the cast of the revived Queer Eye. Then, to make sure her message was really driven home, she dropped in a horde of caricatured hillbilly homophobe protesters to stamp their feet while she and her pals sunbathe, unbothered. Think of “I’m not mad, I’m laughing actually” as a belabored visual aesthetic.

That same show-the-work ethic extends to her personal life (why arrange a weird little pile of stones near your makeout spot, or give your boyfriend a tank top proclaiming how much he loves you?) just as it extends to Wilson’s film. Though the director has done excellent nonfiction work in the past, here she appears to have been subsumed as auteur by Swift herself. Even Swift’s performance of twentysomething normalcy comes off as weirdly concerted, during the scene in which she invites her childhood bestie over for drinks and then treats herself to a middle-aged standard of white wine thinned with a hefty fistful of loose ice cubes. Miss Americana is by its very nature an ad for the best-selling product known as Taylor Swift, and even if it may be a convincing ad, the act of convincing remains its raison d’etre.

“A documentary about Taylor Swift” would be a fascinating proposition on paper, a chance to peel back the layers of management and artifice and find something unmediated beneath it all. What we get instead is a beatific after-picture, a woman healed, conversant in the vernacular of your one friend who’s always posting memes about “growth” to Pinterest. Wilson’s film only engages with the criticisms of Swift made from a place of bad faith, about her having “too many boyfriends” and most markedly not her appropriative streak. It’s softball filmmaking.

Far be it from me to suggest that Taylor Swift is trying to trick us all into believing that she has an extraordinarily stressful life. That level of media scrutiny would be enough to drive any of us into a permanent turtle shell from the world, but if that’s supposed to be what makes Swift a compelling figure, then she’s no different from anyone else on her tier of notability. In this respect, the film actually short-changes Swift, sanding off the flaws that make her ongoing story worth investing in so that they might contrive a friendlier version of imperfection.

Wilson airlifts her subject off of the Barbara Jean track and gently sets her down on the well-paved road to betterment, not far removed from the same juncture that Ariana Grande reached around the time of “thank u, next.” Funny thing about that: while Taylor Swift remains mum about the 2020 election, nothing stopped Grande from throwing her weight behind Bernie Sanders back in November. 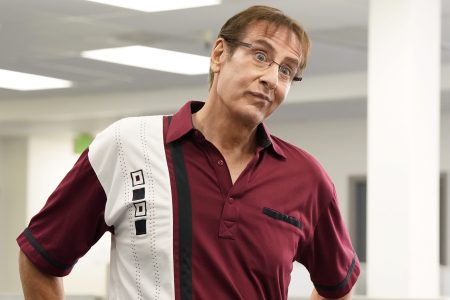