“TÁR” Is the First Movie to Really Get Cancel Culture Right

Director Todd Field's film is the first nuanced, non-embarrassing take on the issue

It’s not often that the public gets the chance to observe the entire film industry undergo a collective, full-scale existential crisis, and when we do, it’s usually of the technical rather than spiritual variety. Singin’ in the Rain and Sunset Blvd. captured the old guard’s anxieties about the introduction of sound to moving pictures, and those inclined to look closely at the last decade of auteur projects can find plenty of unease about the changeover to digital equipment and imagery. What makes the no-less-seismic era of Me Too truly, fully unprecedented is that the conversation no longer revolves around how artists make movies, but how they live. There’s a war on, and everyone seems to believe they must pick a side.

The works processing this cataclysmic challenge to age-old power structures have generally fallen into one of two warring camps. In favor of upending the ossified patriarchy, we have can-do films like Bombshell, in which a trio of whistleblowing women at Fox News depose lecherous head honcho Roger Ailes and leave the network a safer, more virtuous place to work. The anti- faction encompasses recent right-wing broadsides like the ideological screeds of Dinesh D’Souza and Dennis Prager, though its pathologies are articulated more precisely by precursors like David Mamet’s Oleanna and the seventh season of Entourage, joined in their belief that opportunistic women make mortal sins out of influential men’s roughness around the edges to gain the upper hand in competitive fields. Though the parties arguing against institutionalized predation have an obvious moral high ground, when reiterated in fiction, both ends of the spectrum come up short. Those nail-biting over the PC police’s overreach lose sight of the humanity at stake that trumps abstract or academic concerns; those vaunting triumphs over the system would have us believe nothing of worth has been lost in this process, selecting easy-to-hate villains instead of artists with value complicating their disposal.

The first non-whiny, non-embarrassing cinematic perspective on “cancel culture,” Todd Field’s TÁR brings a sober, moderated nuance to a third-rail issue that all but demands polarization. The burgeoning queer fandom for the Cate Blanchett-played Lydia Tár — accomplished conductor, disciple of Leonard Bernstein and lesbian icon — affirms that we’re not supposed to feel one way or the other about this prickly yet magnetic figure. She’s a bullying egotist with a hinted-at predilection for sleeping with the fresh-faced musicians desperate for her approval, and as Field tracks her inevitable downfall, he leaves decisive tells that it’s well-deserved. And yet her dethroning comes with an air of lamentation founded in the belief that excellence means something in a world frightfully short on bona fide geniuses, her classically Greek hubris spoiling significant contributions to art at large. She has to go down, but Field knows it would be disingenuous to deny the frustration in seeing culture going down with her, even if just slightly.

Tár (the person, that is, the title of her screen vehicle all-capped by royal decree of the publicity team) is introduced at a public talk for The New Yorker Festival, an exclusive position typical of the rarefied overworld of first-class flights and strategy meetings that Field maps with credibility and precision. The exchange lasts so long that a viewer realizes it’s not preamble to action, but rather the start of the game, giving us everything we need to know about a brand-name held in mythical, towering stature. First off, her lucid and verbose responses to staffer Adam Gopnik’s softball prompts prove that Field can back up the claims of his character’s intelligence with his own, the most common stumbling block for depictions of smart people. As she waxes rhapsodical on the history of Mahler and his relevance to the present, it becomes clear that conductor, composer and writer are all facets of her overall vocation as steward of high art, ensuring that classical music remains vital in a society with a deteriorating relationship to it. And we get a glimpse of her resultant megalomania as she explains that the conductor’s job is to control time instead of merely keeping it, the universe starting and stopping on her command. 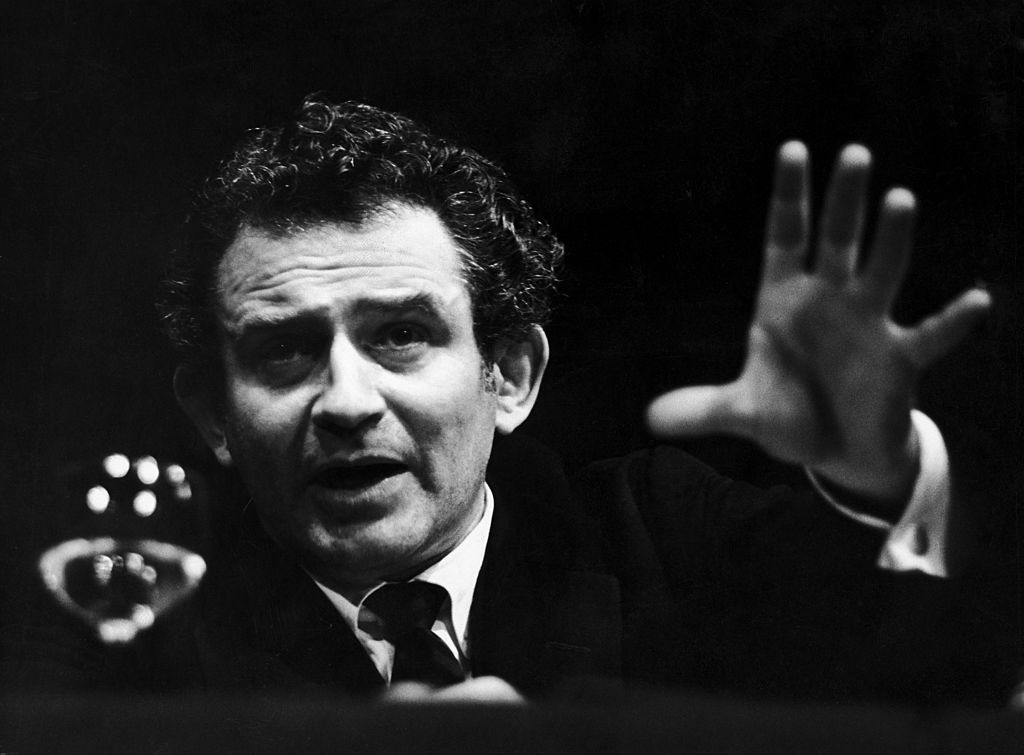 Can you be "canceled" if your works are still in print?

Control is everything for Tár, her combination of will and exactitude evident in a montage of habitual jogging (a sign of the desperate need for order in a chaotic life, as all screenwriters know) and custom suit-fitting. She keeps the upper hand in a conversation with a lesser colleague (Mark Strong) as if holding sway over a string section, expertly dismissing him as a middling wannabe with a frosty politeness subtle enough to scan as good manners to the untrained eye. That rigorous composure breaks in a Juilliard conducting seminar a few scenes later, however, during which one student (Zethphan Smith-Gneist) identifies as a “BIPOC pangender person” to qualify their disregard for Bach as a philandering emblem of a hidebound status quo. Countering that his reproductive record has little bearing on his brilliance as a pianist, Tár walks the class through the opening of The Well-Tempered Clavier, dissecting Bach’s interplay between divine yearning and doubt one bar at a time. She makes her point, but can’t help pressing her thumb on her pupil, growing aggressive and glib as she takes the kid to task for letting politics of identity and ethical purity negate creative merit.

A heavily edited video of this lecture-turned-rant starts to circulate online and threaten Tár’s reputation, a looming “cancelation” that only picks up steam once it dovetails with a far grimmer controversy. As a PR maelstrom gathers around her, she comes to resemble the men she broke the glass ceiling to join, particularly in her callous treatment of the wife (Nina Hoss, meditating in rage) she takes for granted and the lackey (Noémie Merlant) she strings along with promotions that will never come. At a certain level of arrogance, everyone basically becomes male, as suggested by Tár’s wardrobe of long straight-leg slacks and bust-disguising tops, or her offhanded self-identification in one line of German dialogue as father to her own daughter. Selecting a queer woman character as a mascot for problematic hauteur might seem like Field giving himself an out, but he’s really taking away ours; remove the automatic opposition to structurally advantaged elite men, and we have no choice but to consider this case study on its own terms, our armchair inventory of the soul winnowed down to the situation’s component parts.

Tár’s indignant entitlement worsens as she realizes she’s losing her grip on the solar system of money and power that revolves around her, the inkling that made her lose her cool in the first place. She takes a shine to a young cellist (Sophie Kauer) and leads her into a well-honed seductive routine of solos and overseas trips, stung when the girl snubs her to go out partying with friends presumably her own age. In sleep, portentous visions — haunted woods, smoke billowing out of her mouth — herald the apocalyptic. As bad optics gather on the horizon like storm clouds, Tár comes undone not for her own sake, convinced that she’ll make it through minimally scathed without much contrition. She’s chiefly aggrieved over the general welfare of music, which is why it’s the final straw when the neighbors across the way from the apartment she holds onto as an atelier ask her to keep the noise down while practicing. Deliriously angry to see what Shakespeare called the food of love treated as a nuisance, she goes into a free-fall that starts as comedy and pivots to tragedy within minutes.

Speaking of tragedy — as Aristotle laid its structure out, this is the juncture in the movie at which the narrative concept of peripeteia should hit, once the flawed protagonist makes a crucial realization giving their arc a turning point. That seems to be where Field’s going, too: he shows a post-scandal Tár having relocated to Thailand with brief glimpses of dining at an outdoor night market and counseling local kids, a possible back-to-basics move for someone who got her start studying the musical patterns of an Amazon tribe. She takes the podium once more, and for a moment, we can believe that she’s reconnecting to the essence of her work, having shed the toxic cocoon of privilege it granted her. Not so, as revealed by the final shot, too brutally hilarious to be detailed here. Suffice it to say that she has exchanged all her legitimacy for one last morsel of authority; this is her “Gina Carano doing My Son Hunter after getting booted from Star Wars” moment. She can almost trick herself into thinking she wants this instead of needing it, that inability to resist her most obvious vanities the engine of her entirely avoidable, self-incurred destruction.

For Tár herself, the ignominy of her new position serves up just desserts, but Field also keeps one eye on the destruction in her wake. Notwithstanding its punchline comedy value, the final shot’s dominant tone is that of disappointment, mourning the integrity of fine art doomed to be gobbled up by the pop barbarians at the lowest-common-denominator gates so long as the keepers insist on ruining themselves. There is only one Lydia Tár, and while the human species will always deliver unto us more masters for each form, the sui generis nature of true inspiration is such that she’s irreplaceable in specific. Two difficult truths coexist in tense disharmony, then: that there’s no level of talent giving someone a pass for physical or psychological violation, and that the sanctity of vision has been degraded by turning away from abrasive, even abusive personalities. There’s nothing to be done about it, the dignity of life outranking all other imperatives, but those of us dedicated to the proposition of greatness deserve some leeway to feel ambivalence even as we know what’s right. These losses are regrettable and necessary, neither quality canceling out the other.