After a yearlong hiatus, the most exciting names in cinema descended

This is the final volume of the French Dispatches, our on-the-ground coverage of the 74th Cannes Film Festival, which is back in 2021 after a yearlong hiatus due to COVID-19. Thanks for reading.

As I was checking in, going through security and passport control and boarding my flight from Paris Orly back to New York on Saturday night, word began to leak out that “Spike Lee’s jury has chosen chaos.” Titane star Agathe Rouselle had posted in her Instagram Stories that she was on her way back to Cannes for that evening’s awards ceremony (in the run-up to the awards there are always rumors flying about who the jury has invited back), and the filmmaker Isabel Sandoval, who turned out to be very well-connected, had all but spilled the tea about a historic Palme d’Or win for Titane and Julia Ducournau. By the time I landed and turned my phone back on, Titane’s win seemed a foregone conclusion — and must have seemed so to Spike Lee, too, because he somehow contrived to announce it right at the top of the show, an hour ahead of schedule, before any awards had been given, inspiring some instant-classic reaction memes from his fellow jurors, in particular some from Mélanie Laurent that I think will have legs.

When I wrote about Titane last week, I said that it was the film of the festival even though it was unlikely to win anything, so this is a thrilling decision. The 37-year-old Julia Ducournau becomes the first woman to win the Palme d’Or solo (in 1993, Louis Malle’s jury split the Palme between Jane Campion for The Piano and Chen Kaige for Farewell My Concubine, and in 2013 Blue Is the Warmest Color stars Léa Seydoux and Adèle Exarchopoulos awarded alongside their director Abdellatif Kechiche). Spike Lee and his fellow jurors did the right thing in recognizing this wild, galvanic and forward-looking sensation — a fitting end to a Cannes that sought to restore cinema to the forefront of the post-COVID consciousness.

Giddy on kino, in a spirit of enthusiasm more than of irreconcilable differences, the jury awarded two films each the Grand Prix (runner-up) and Jury Prize (third place). The Grand Prix went to Juho Kuosmanen for Compartment No. 6 and Asghar Farhadi for A Hero. The former is a Finnish film, set in an indeterminate moment in the late ‘90s or early 2000s, about a Finnish woman and a Russian man sharing a sleeper compartment on an overnight train journey from Moscow to Murmansk; it’s a nice little movie, distinguished by Kuosmanen’s incredible feel for period detail on a shoestring budget. The train scenes were shot, on 35mm, in the actual compartments of an actually moving train rented from the Russian railroad company and run on their tracks on full-day out-and-back shoots, and it pays off in an incredibly vivid evocation of the early post-Soviet years. A Hero, from the two-time Oscar-winning Iranian director Asghar Farhadi, was tipped by many to win the Palme and maybe would have in a more normal year. It’s a vintage Farhadi film about everyday morality and wrenching bureaucracy. From its low-key fable of an inciting incident — a prisoner on a two-day furlough decides not to sell off a found trove of 17 gold coins to pay off his debts — it spirals outwards to a cross-section of modern Iran in which everyone has their reasons, with an added layer of complication coming from a digital world whose problems of viral misinformation and reputation management track nicely with Farhadi’s usual concerns.

The Jury Prize was shared between the Israeli filmmaker Nadav Lapid’s Ahed’s Knee, an intellectually bullish self-reflexive drama about a very Lapid-like dissident filmmaker’s soul-darkening battles with the Israeli state, and Apichatpong Weerasethakul’s Memoria, which screened the second Thursday and in the sober light of day was possibly the best film in the competition. The Thai filmmaker made the movie in Colombia, with big fan Tilda Swinton as his star and coconspirator; it’s a film about the hum of memory and its persistence, at an almost imperceptible octave, in our everyday life. Touching oh so lightly on themes of colonial violence and personal grief, it begins from a place of alienation, with Swinton’s character plagued by a sort of thumping, explosive sound only she can hear, before leading her into the jungle and into communion with the vibrations of the past, in a second half that produces miraculous, soothing setpiece after setpiece. It’s slow as hell — I’m the only one from my Airbnb who stayed awake for the whole movie — but it’s profoundly sad and deeply rapturous.

The only major snub on this grab-bag of worthy titles is Mia Hansen-Løve’s Bergman Island. Tim Roth and Vicky Krieps play husband-and-wife filmmakers clearly modeled on Hansen-Løve and her ex, Olivier Assayas, on a joint writing retreat on Fårö, the Swedish Island where Ingmar Bergman lived and worked for much of his life. The jury must have thought it was thin or self-indulgent, but I and my Cannes roommates, among other critics, were taken with how serious conflicts about life and art were enfolded into layers of references to Hansen-Løve’s personal life and previous films. The vibes were off the charts.

I said in my Opening Night report on Annette that Leos Carax’s maximalism would appeal to Lee, and so it did, with Carax winning Best Director, which given the four-pack of Grand Prix and Jury Prize winners feels like a clearer recognition of a major artist. So too does the Best Screenplay award to Ryusuke Hamaguchi (and cowriter Takamasa Oe) for Drive My Car, the best-reviewed film in the competition, a three-hour Haruki Murakami adaptation about a grieving theater director mounting a multilingual production of Uncle Vanya. It feels a little reductive for the jury to designate this as a writer’s film: the structure and dialogue are for sure excellent and Hamaguchi’s a formidably intelligent filmmaker, but that comes through in other ways as well. There’s his feel for explosive melodramatic stylization in a coolly atomized modern context; his interest in performance and communication; his daring control of duration, pacing and tone; his expansive and subtle feel for locations; his constantly fresh editing choices. Just a half-decade on from his breakthrough with the constantly engrossing five-hour workshop-developed everyday epic Happy Hour, Hamaguchi has fully arrived as the world’s next great filmmaker.

In my second French dispatch I confidently, blithely predicted a Best Actress win for Renate Reinsve in The Worst Person in the World, then silently kicked myself every time I watched another actress give another marvelous performance: Rouselle, Virginie Efira in Benedetta, Seidi Haarla in Compartment No. 6, Swinton, Seydoux in the otherwise unsuccessful France and The Story of My Wife, Achouackh Abakar Souleymane in the Chadian Lingui, Krieps and Mia Wasikowska as her film-within-a-film alter ego in Bergman Island … And yet, Renate Reinsve won Best Actress despite all that, so chalk one up for the naive enthusiasms of youth. (I am not young, but the first week of Cannes feels like a long time ago.)

Best Actor was Caleb Landry Jones for the Australian filmmaker Justin Kurzel’s Nitram, which was one of the last Competition titles to premiere, on Friday after I left the festival. (My roommates and I spent a very merry two weeks shouting “Oi! Nitram!” at each other in a terrible Aussie accent at random moments throughout the festival.) The film is Kurzel’s attempt to portray the life of notorious Australian mass shooter Martin Bryant, perpetrator of the 1996 Port Arthur massacre, and proved a divisive, decisive late-breaking entry into awards consideration, but I wish the prize for Best Actor at Cannes had gone to former MTV VJ, Paris Hilton paramour and Scary Movie franchise star Simon Rex. Really! In Sean Baker’s Red Rocket, Rex plays the washed-up porn star Mikey Saber, possessor of the titular big swinging dick. Exposing himself, emotionally and physically, as much as Reinsve or Rouselle or Efira, Rex taps his natural reserves of himbo guilelessness to convey Mikey’s momentum and charisma, while also reckoning with his unforgivable egotism and delusions of grandeur, in a film that’s harder-edged than Baker’s previous work about the transactional ethos of sex work and the selfishness of American dreaming.

This was my first Cannes, and perhaps a nonrepresentative one — festival veterans marveled at how many films they were able to see thanks to the new online ticketing system, which in the fest’s great face turn was able to smoothly facilitate back-to-back screenings and on-the-fly rescheduling with peace of mind, and freed up plenty of time for us to discover smaller films and get writing done, rather than spending longer than the length of a feature film standing in line every day, as even critics for elite publications would normally have to do. It’s a no-brainer to retain for future festivals, even though the system will require some tweaks once attendance — way down even at the Lumière galas — rebounds to pre-pandemic levels. (We all smiled indulgently, even me, at the first-time attendee who brought a tuxedo because he thought he’d need one, even though you only wear them for the evening premieres at the Lumière, and he had a yellow badge. Jokes on us, he wore it when he got into The French Dispatch.)

But the big story is that the open Cannes bubble seems to have worked. With 100% capacity masked screenings and free PCR testing every 48 hours or less for all non-EU attendees (who were largely eating and drinking outdoors except during the soccer matches), the number I’ve read is less than 100 positive cases from almost 20,000 attendees. And despite constant swirling rumors of a festival cluster, it never seriously felt to me like Cannes was in jeopardy. So, amid swigs of Duty Free rosé to keep the feeling alive, I’d like to close out my French Dispatches by recognizing the true star of Cannes 2021, the young French woman in the blue plastic PPE who ended up administering most of my nasal swab tests. She was lovely, and hooboy can she hit the backwalls (of my sinuses). 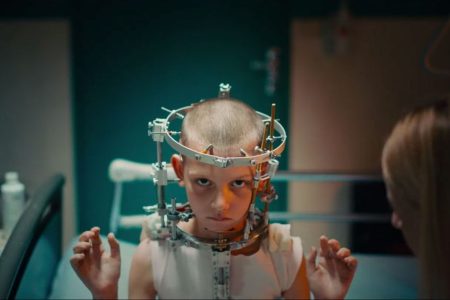 Inside "Titane," The French Body-Horror Film That Just Won the Palme d'Or 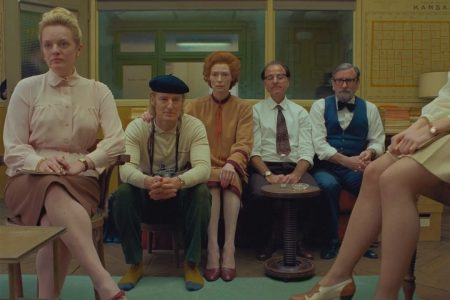 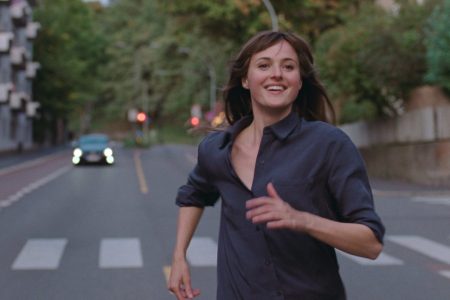 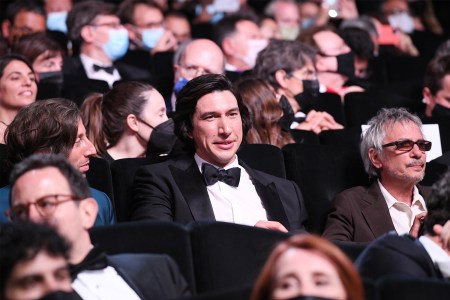