This Restored WWII Spitfire Has Begun a Circumnavigation of the Globe

The “Silver Spitfire” took off from the U.K. last week, will reach the U.S. soon

The Silver Spitfire took off from England on August 5th and will reach New York City around August 16th.
Silver Spitfire - The Longest Flight
By Alex Lauer @alexlauer

These days, many of us take flying for granted. We complain about the long lines at the airport, grab a cocktail and charging port at the gate-adjacent bar, then recline our seats (or judge the people who do) while we’re flown across states, countries and oceans in comfort that was inconceivable in 1943. We don’t give a second thought to the pilots or the machine.

Now, imagine flying not in a new passenger aircraft on a 90-minute jaunt, but in a 76-year-old, single-seat, WWII fighter plane … around the entire world. In a journey that began Monday, August 5th at England’s Goodwood Aerodrome, that’s exactly what pilots Matt Jones and Steve Boultbee Brooks plan to do.

Brooks calls it “a pilot’s Everest.” Officially, the expedition is titled: “Silver Spitfire – The Longest Flight.” The name alludes to the Supermarine Spitfire aircraft, one of the most recognizable warplanes to dogfight in the skies, the particular model here being a Mark IX built in 1943. No one has ever flown one around the world, so they figured what better way to celebrate the 75th anniversary of the D-Day landings (officially back on June 6th) than by flying the Silver Spitfire to, in their words, “the many countries that owe their freedom, at least in part, to this iconic aircraft”?

History of the Spitfire

While the Spitfire was crucial throughout the war — it was the only British fighter in production the entire length of the conflict — there were many decisive moments where the plane was a key element to victory.

During D-Day, for example, the Spitfire Mark IX — the same model being flown for this expedition — was used as air support, both in its traditional canon and machine-gun configuration as well as in an adapted fighter-bomber setup, according to the BBC. They’re cited in most books and documentaries about the war, so the camouflaged propeller planes will be familiar to many. But those lacking in legitimate WWII history may recognize them also from Christopher Nolan’s Dunkirk. The director famously used real Spitfires for the film instead of CGI.

The Rebirth of the “Silver Spitfire”

So why is this one called the “Silver Spitfire”? For its flight around the world it has been “demilitarized.” That partially includes scrubbing the iconic camouflage paint in favor of polished aluminum, but also means the guns have been removed. Yes, there were guns in this plane at one point; according to the expedition’s website, it flew in 51 combat missions and is considered “one of the most original airworthy Spitfires in the world.”

That originality can be seen in the plane from tip to tail. Up front, the propeller blades are made of wood. In back, the stabilizers on the tail are covered in fabric. And powering the pilots 27,000 miles and to 30 countries is the same Rolls-Royce Merlin V12 engine. (Yup, Spitfires were powered by Rolls-Royce.) Jones and Brooks are are using all these original elements to fly not just in short bursts during a battle, but around the globe.

One week into the journey, which is expected to take four months, the Silver Spitfire is sitting in Nunavut, Canada (at least at the time of writing). How do we know this? Because there’s a live tracker to keep up with the plane, which you’ll see is officially registered as G-IRTY.

We reached out to IWC Schaffhausen, the principal sponsor of The Longest Flight (both pilots are wearing the watchmaker’s Pilot’s Watch Timezoner Spitfire Edition “The Longest Flight”), to see when the Spitfire will land in New York City; right now it’s expected on or around August 16th. Unfortunately, you won’t be able to greet the pilots on landing as the events won’t be open to the public, but keep an eye on that live tracker. If there’s a chance you can catch a glimpse of the plane — the real plane — that flew over the Allied troops in Normandy, you better take it. You probably won’t get another chance.

“Probably” being the operative term. The two pilots are also the co-founders of Boultbee Flying Academy. Based at Goodwood where the launch event took place, it’s the world’s first Spitfire school and flight operator, and has hosted everyone from Prince Harry to Brad Pitt. But they’re not open again until after The Longest Flight is over, so you have plenty of time to watch the progress, listen to the podcast, rewatch Dunkirk and decide if you think you can handle a 1943 warplane.

If you get headaches during takeoff in first class, the answer is probably no. 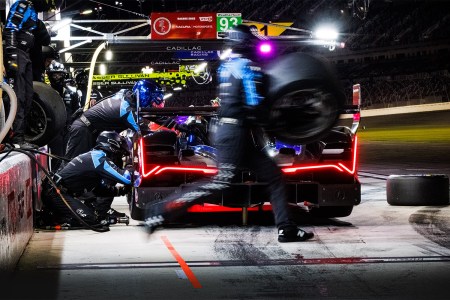 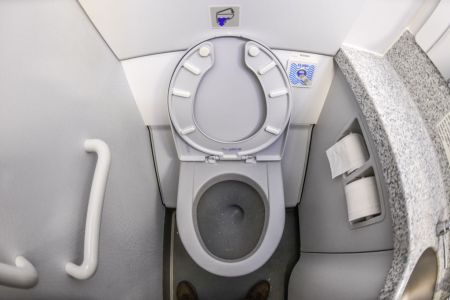