Pancakes vs Patriots: The War Over Remembering the Revolutionary War

Is an IHOP about to open atop the nation’s largest Revolutionary War burial ground?

Update: After this story ran, the review of the proposed Continental Commons development set for February 14 was canceled (along with the meeting). The review was rescheduled for March 14. At that meeting, the Fishkill Planning Board found that the Continental Commons development will not impact the community in an adverse way, likely paving the way for its approval. That announcement was met with some outcry (beginning at the 7:40 mark in this YouTube video), including objections by Commons protesters dressed in Revolutionary garb. An official vote on Continental Commons should take place on April 11.

How’s this for a Presidents’ Day salute? A week before George Washington’s birthday this month, a planning board in Fishkill, New York may let a developer permanently deface one of the nation’s most important Revolutionary War burial grounds in order to build an International House of Pancakes.

The land — 10.47 acres in Dutchess County — is listed on the National Registry of Historic Places, and the National Park Service proclaimed it to be “the largest burial ground for Revolutionary War soldiers in the country.” The New York Times reported that 10,000 period artifacts, including cannonballs and muskets, have been found in the vicinity. Local preservationists believe it is hallowed ground.

Some local citizens, including West Point graduate Lance Ashworth, have been fighting the “Continental Commons” development project since its introduction in 2015. The land is in the area of the Fishkill Supply Depot, a bustling military outpost established by George Washington that was vital to his victory in the Revolutionary War. The developer is fighting back just as hard, filing lawsuits against the local preservationists as individuals, and even posting a billboard implying that they illegally planted artifacts on the site. Nearly 236 years after the Revolutionary War, the last great battle of that War — to preserve the Patriots’ gravesites and honor their memories — may be decided this week in a town hall meeting room, 60 miles from New York City.

The developer/owner of the proposed Continental Commons, Domenic Broccoli, claims his project will “weave together history, preservation, tourism, along with commerce” in an “attempt to capture the essence of the Fishkill Supply Depot and its importance during the Revolution.” Multiple requests to the developer for comment by RCL have gone unanswered. When contacted, IHOP declined to confirm or deny they would take part in the project.

Meanwhile, the not-for-profit Friends of Fishkill Supply Depot believes a key portion of the historic site is at “immediate risk of being permanently lost to commercial development.” In 2017, Rombout Rural Cemetery Association secretary Lisa Daley wrote in the Poughkeepsie Journal: “Since the rediscovery of the FSD burial ground at the Continental Commons parcel in late 2007, a total of 13 bodies have been located amid the hundreds of uninvestigated anomalies appearing on a Ground Penetrating Radar (survey) of the same location.” Friends of the Fishkill Supply Depot claim that by searching primary source documents including muster rolls and hospital records they have discovered 86 soldiers buried on or near the site.  “Nobody truly knows what’s at the site right now,” says Ashworth, president of the Friends group, “and if the development continues, we’ll never know.”

A Mall Marks The Spot

In 2006, the New York Times described the Fishkill Supply Depot as “the main provider of artillery and food for up to 4,000 troops stationed there to keep the British from moving past New York City and capturing the Hudson Valley.” George Washington ordered the construction of the military camp and storage yard soon after the start of the Revolutionary War in 1775. “Despite its significance,” wrote the Times, “the depot and its role in the war have faded into obscurity, while most of the land where it once stood has been developed.”

In 1971, there was an effort to turn the original 70-acre parcel of land into a national park, but the town blocked the proposal in the interest of commercial development. In 1974, Fishkill became the home to the Dutchess Mall, which eventually failed. By 1998, the Wall Street Journal wrote, “There are more geese than cars in the parking lot and the few people in its corridors are as likely to be recreational walkers as shoppers.” The current debate is over developing a new mall, albeit one with a historical component, on the approximately 10 acres adjacent to the abandoned mall.

In 2017, RCL wrote about the dispute. Since then, Continental Commons has struck aggressively. A billboard erected last year, including a picture of Ashworth, reads “WANTED,” and seeks evidence of “illegal tampering on this property by Friends of the Fishkill Supply Depot.”

Barbara Hobens, a historian and author who served as the organization’s Vice President in 2012, tells RCL she was “served with a Summons and Complaint by the developer and parcel owner, Domenico Broccoli” and received his “Supreme Court of Dutchess County ‘Trial By Jury Demanded’ papers in November of 2018.” 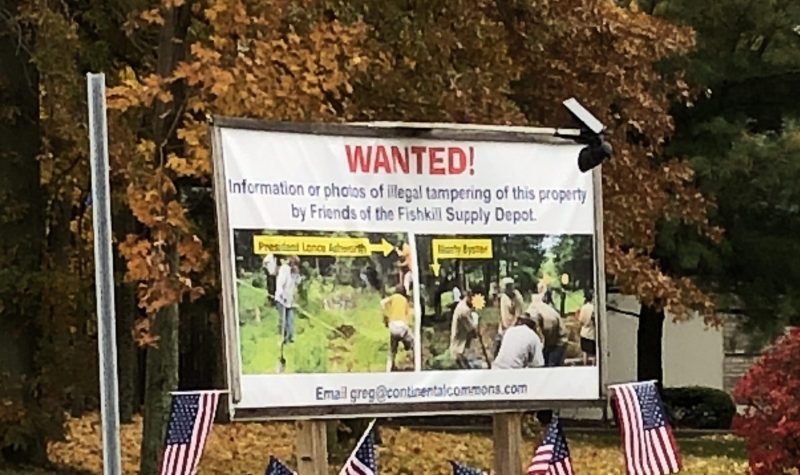 According to the U.S. Department of Veterans Affairs, the Revolutionary War saw 4,435 U.S. service-member battle deaths from 1775 to 1783. But this is just a fraction of the Americans who died. The Mount Vernon site notes, “One study suggests that for every soldier who fell to the British, ten died from some sort of disease.” That 2006 New York Times piece on Fishkill Supply Depot reported that historians “believed that hundreds, if not thousands, of Continental Army soldiers who died from war wounds and smallpox were buried somewhere near the site.”

Broccoli states that there have been “more than a dozen archaeological studies completed on the Continental Commons properties,” and has announced that a burial site discovered on the property in 2007 will be preserved — no building will occur on it.

The Friends website says the land for Broccoli’s proposed mall “contains the soldiers burial ground, possibly the largest continental army burial ground in existence where over 300 soldiers lie in unmarked graves.” There are studies suggesting that the estimate is high, though Ashworth insists there has never been a survey exhaustive enough to provide a definitive answer.

And whatever the precise number of fallen patriots, Ashworth argues that the project is inherently disrespectful, as its “parking areas, buildings, etc.” ensure that commercial construction “effectively suffocates the [burial] site.”

“How solemn of a burial ground will it be,” Ashworth asks, “with an IHOP restaurant just steps away?”

The battle over the future of the past appears to be nearing a conclusion. “There has not been a determination of significance yet,” Debbie Colonna, secretary for Fishkill’s seven-member Planning Board, tells RCL. The end may be approaching: That all-important assessment and board review is scheduled for February 14.

Broccoli has written that any discussion of Continental Commons should keep in mind one simple truth: The land is his. “They seek to use government to devalue my property so they can take ownership of it. They forget that property rights were at the heart of the patriot cause and that the Founders believed property rights were essential to a free society.”

Meanwhile, Ashworth points out that this is not just any property, but one inextricably tied to the bodies of fallen soldiers: “All burial grounds are sacred and whether it only contains 13 soldiers or contains 300+, it does not deserve to be suffocated and dishonored by the shadow of a chain restaurant and strip mall.”