Albert Einstein Once Gave a Tip to a Bellboy That’s Now Worth $1.5 Million

A year ago, Einstein's scribbled "Theory of Happiness" made someone relatively wealthy at auction.

In addition to being a scientist, a philosopher, and somewhat of an amateur comedian, Professor Albert Einstein was something even more admirable: a good tipper.

We know this because a year ago today, an inscribed piece of paper the Nobel Prize winner gave a bellboy as a tip while touring Japan in 1922 sold for more than $1.5 million at auction.

As the story goes, Einstein was traveling to Japan from Europe to deliver a lecture series when he found out he’d been awarded the Nobel Prize in physics. News of the award spread quickly and Einstein, somewhat flustered by all of the attention, sequestered himself in his room at the Imperial Hotel in Tokyo.

Secluded and a bit embarrassed by all the publicity he was receiving, Einstein tried to write down his thoughts and feelings, according to Jerusalem-based Winner’s Auctions.

While in the process of documenting everything he was experiencing, a bellboy came to Einstein’s room to deliver a message. Not expecting the courier, Einstein didn’t have any small change to tip him and instead opted to give bellboy a pair of the writings he’d been working on.

Aware his stock in the world was rising, Einstein supposedly told the Japanese messenger the notes would turn out to be more valuable than a regular tip if he was lucky. 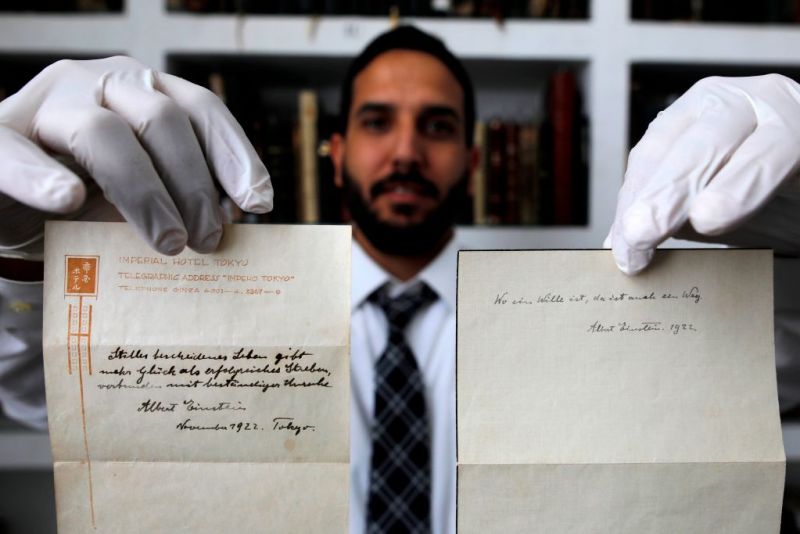 The first note, written in German on hotel stationery and signed by Einstein himself, offered the professor’s “theory for happiness.” It read: “A calm and modest life brings more happiness than the pursuit of success combined with constant restlessness.”

The second note, written in German on regular paper and also signed, simply said, “Where there’s a will, there’s a way.”

While not as famous as his work on relativity, Einstein’s theory for happiness does seem to be a sound one and is infinitely easier to understand. However, it is noteworthy that, despite his good advice, Einstein’s life didn’t challenge his hypothesis as it was neither calm nor modest.

Tested or not, the theory does appear to be at least somewhat correct. 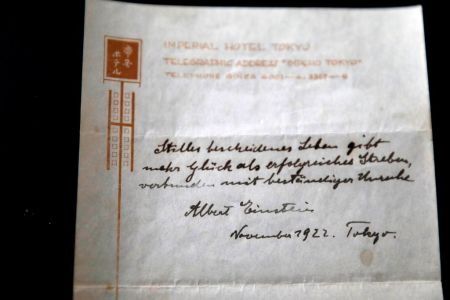 A picture taken on October 19, 2017, shows Gal Winner, owner and manager of the Winner’s auction house in Jerusalem, displays one of two notes written by Albert Einstein on hotel stationery from the Imperial Hotel in Tokyo. (MENAHEM KAHANA/AFP/Getty Images)
AFP/Getty Images

Published by the American Psychological Association, a comprehensive 2005 study of the connection between the life successes and well-being of more than 275,000 people found happiness engenders personal and professional success more often than success in those areas leads to happiness.

Even if his philosophical musings contain no scientific value, the notes do shed a little light on the world’s great physicist’s private thoughts, Roni Grosz, the archivist in charge of Hebrew University’s extensive Einstein collection, previously told the AFP.

“What we’re doing here is painting the portrait of Einstein—the man, the scientist, his effect on the world—through his writings,” Grosz said. “This is a stone in the mosaic.”

Whether the bellboy was able to implement Einstein’s happiness theory on his own behalf is unclear, but the notes did eventually bring some joy to one of his relatives when they were sold by Winner’s last year.

The second note, with Einstein’s one sentence epigraph, brought in $250,000, while the first one that lists Einstein’s happiness theory sold for $1.56 million, a small fortune, even relatively speaking.