The NorCal Cheese Scene Is Brimming Over With Delicious Options

While the phrase “American cheese” has long evoked a plasticine product of dubious deliciousness, these days, the world of American-made artisan cheese is stronger than ever before — and it’s thanks in large part to some big NorCal names.

Cypress Grove is one such producer. Founded in 1983 by Mary Keehn, a former student of marine biology turned goat-loving cheesemaker, the dairy has since become a pioneer of American chèvre, perhaps best known for Humboldt Fog. The cheese, whose name and appearance were inspired by the dense fog bank one can see along the local coastline, was first launched back in 1992 and has since become a household name.

“Humboldt Fog is Cypress Grove’s best-known cheese, and we’re very excited about the joy it brings to so many,” says Cypress Grove marketing manager Janne Rasmussen. “The emotional attachment is incredible — and after 30 years, Humboldt Fog paves the way for so many other cheeses.”

These include buttery, bloomy-rinded Little Giant, launched in January 2020, and Meyer Lemon and Honey  — a fresh goat cheese — launched in June 2022. The company also has plans to launch a new style early next year.

But Cypress Grove is far from the only local cheesemaker crafting exciting cheeses in the area. According to Rasmussen, consumer enthusiasm regarding cheese is at an all-time high, contributing to an ever-growing local cheesescape.

“Never have more Americans been so hungry and knowledgeable about artisan cheese,” says Rasmussen. “Ten years ago, we were still hearing ‘ewwww, goat cheese,’ and that is so rare now.”

If you’re on the lookout for some novel cheeses to share on your holiday cheeseboards, here are just a few of the other local cheesemakers she’s particularly excited about. 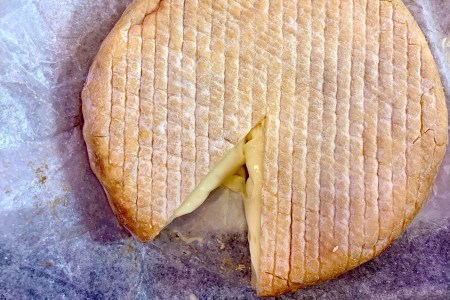 It's a hard job, but someone has to do it

This cheesemaker makes “really solid cheddars” in Bandon, Oregon, which Rasmussen says “is actually closer to Cypress Grove than many others.” The creamery’s Face2Face clothbound cheddar marries the best of both cow’s and sheep’s milk, with a rich creaminess and slight barnyard-y piquancy.

“Their conversion facility in Willows, CA is investing in other cheesemakers, offering an amazing service to artisan cheesemakers and retailers (without a cut and wrap program),” explains Rasmussen. “We really needed this on the West Coast!”

The dairy’s limited-edition Kamome dry jack is seasoned with Japanese sea salt from Rikuzentakata, produced in response to efforts from local Crescent City high school students to restore the Kamome, a 20-foot-long fishing vessel that had washed up on local shores following Japan’s devastating tsunami.

This family-owned cheese company is made up of real industry leaders, says Rasmussen, and its array of cheeses is as varied as it is extraordinary.

“I mean, have you tasted their gouda? I thought these were the blue cheese people!” she says. “Their Bay Blue is also a great example of a line extension offering a different variation of a ‘blue cheese’ within the same style.”

Located in the heart of Berkeley, Belfiore is known for its all-natural, ultra-local mozzarella and burrata.

This family-owned dairy is, according to Rasmussen, “making some very good cheese and hustling every day to keep their business nimble.” Signatures include an old-world aged cheddar and Lionza, a Swiss Alpine style cheese named after Fiscalini family’s ancestral Swiss village.

The family is also pioneering different flavored cheddars, with blocks infused with habanero chiles or truffles as well as a cheddar smoked with a blend of apple, cherry and hickory wood.