In June 2021, Cally Dym, a fifth-generation owner of the Little River Inn on the Mendocino Coast, spotted something unusual during her regular beach walks near Van Damme State Park: a sea star.

It was tiny, “maybe an inch big, not even,” Dym says. Even so, for someone who has spent her entire life attuned to the ebb and flow of the coastal waters along this rugged stretch of Northern California, seeing the sea creature, her “first one in a very long time,” was “super encouraging.”

That’s because the local sea star population has collapsed in recent years, thanks to a disease known as sea star wasting syndrome that started wiping them out along the American Pacific around 2013 to 2014. It’s had a devastating domino effect on the marine ecosystem in the area. Sea stars are the primary predator of sea urchins, the spiky invertebrates that, unchecked, feast on bull kelp, a critical component of the ocean environment that’s home to many species of fish, snails, crabs and the already threatened abalone, a beloved crustacean found on the Mendocino Coast. (Other marine patterns, including warmer waters, have also contributed to the kelp’s demise.)

The damage is staggering. Since 2008, bull kelp forests have experienced a whopping 95% drop in Northern California, their bulbous stems and flowy, serpentine blades all but gone amidst grim underwater landscapes that scientists refer to as “urchin barrens,” where the spiny globes dot the ocean floor.

That’s where Dym’s latest project comes in. Along with Matthew Kammerer, executive chef at the Harbor House Inn, Dym is spearheading the Mendocino Coast Purple Urchin Festival, which runs from June 17-19. It claims to be the first event of its kind in the U.S., with the aim to educate attendees about what’s happening with sea urchin in ocean environments, and how they can do their part by eating them.

On that note, it kicks off appropriately on Friday, June 17, with an outdoor demo followed by a five-course purple urchin lunch tasting menu at the Harbor House Inn presented by Kammerer and Urchinomics, a North Holland-based seafood company that aims to restore kelp forests by removing the overgrazing sea urchins and supplying them to restaurants. Most demos and educational events are free or donation-based.

Properties including the Little River Inn, Noyo Harbor Inn and Elk Cove Inn are encouraging guests to make a weekend of it with discounts on rooms, and restaurants up and down the coast are offering special urchin-centric dishes and tasting menus.

“I think a lot of it is getting to people through their stomach,” Dym says. “We’ll learn a lot about the broader picture of the kelp and the sea stars and the urchin. Then everyone will be able to open their urchin, and we’ll teach people how to get the roe, how to clean it up, and they can eat the urchin fresh out of the shell.”

While Fort Bragg, the largest city on the Mendocino Coast, is one of the top U.S. producers of sea urchin, the vast majority is shipped to Asia, where it’s known as “uni” and revered as a culinary delicacy. But thanks to changes in licensing regulations, Dym explains, local fishermen and urchin divers can sell direct to the consumer, right off the boat. That’s ideal for local chefs looking to showcase the ingredient on their menus.

“It’s probably the last five years that this shift has started,” Dym says. “So now if you’re working with a local fisherman, uni is suddenly something that you can get instead of it all going to Japan.”

Kammerer, a James Beard Award Best Chef semifinalist in 2020, has taken full advantage of that upon arriving at the Harbor House Inn in 2018. “Since day one” he’s had uni on the menu at the 25-seat restaurant, which has earned a slew of accolades, including two Michelin stars and a Michelin Green star, since he came onboard. “The quality of what you start with will determine the outcome of your recipe,” he says. “We only use the freshest urchin. There is no substitute.”

Less than a mile down U.S. 1, Victor Passalacqua, executive chef of Sibo at the Elk Cove Inn, is another big fan of uni. Passalacqua has been cooking with uni throughout his 30-year career, inspired, he says, by legendary chefs such as Alain Ducasse and Paul Bocuse. But it was only just prior to moving to Mendocino County from Miami in May 2020 that he discovered the under-the-waves urchin trouble brewing.

“Anytime I travel I look up the foods, the restaurants, the foraging,” he says. “Before coming, while [my wife and I] researched the area, it is one of the things I found out about and very quickly learned about the purple sea urchin’s invasiveness and how it was altering the whole marine ecosystem.”

Passalacqua and his wife, Melissa, a certified sommelier and wine educator, both avid foragers, quickly found a new favorite pastime in California: walking down to their local cove, and “doing our share…harvesting and eating” urchins. In the Sibo kitchen, he says “working with uni is like giving Play-Doh to a kid, with incredible texture, colors, flavors.”

Not every experiment has worked, of course. Passalacqua recalls once poaching uni in a miso consomme and then emulsifying it with some seagrass. It initially worked to produce a light, foamy texture — but only for a couple of minutes. “Nothing I added would keep it that way without drastically changing the flavor,” he says. “Lots of time was wasted, but many things were learned.”

One thing that many uni newbie festival attendees are likely to learn is how to open a sea urchin. There are several techniques and strategies for cracking open the fearsome-looking spiny shell to extract the orange-brown roe (which is actually the creature’s gonads). However you do it, you’ll need a pair of rubber gloves (to prevent your hands from getting stuck with a spine or stained with ink), a sturdy pair of kitchen shears (though some methods use two spoons) and a bowl of fresh water (to clean off the uni so you can pop it right in your mouth).

In future years, Dym envisions the option for festival-goers to actually get in the water and dive for their own urchins. For now, though, she and other organizers are focused on finally getting the event underway after a year of pandemic-related postponement, and the message out about how consumers can do their part to help restore the kelp habitat.

“It’s about shifting our culinary experiences to what’s available and abundant,” she says, “as opposed to continuing to eat things that are becoming extinct because we’re eating them.” 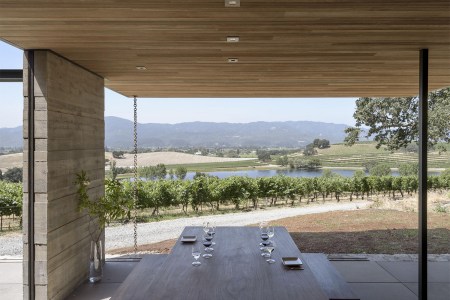