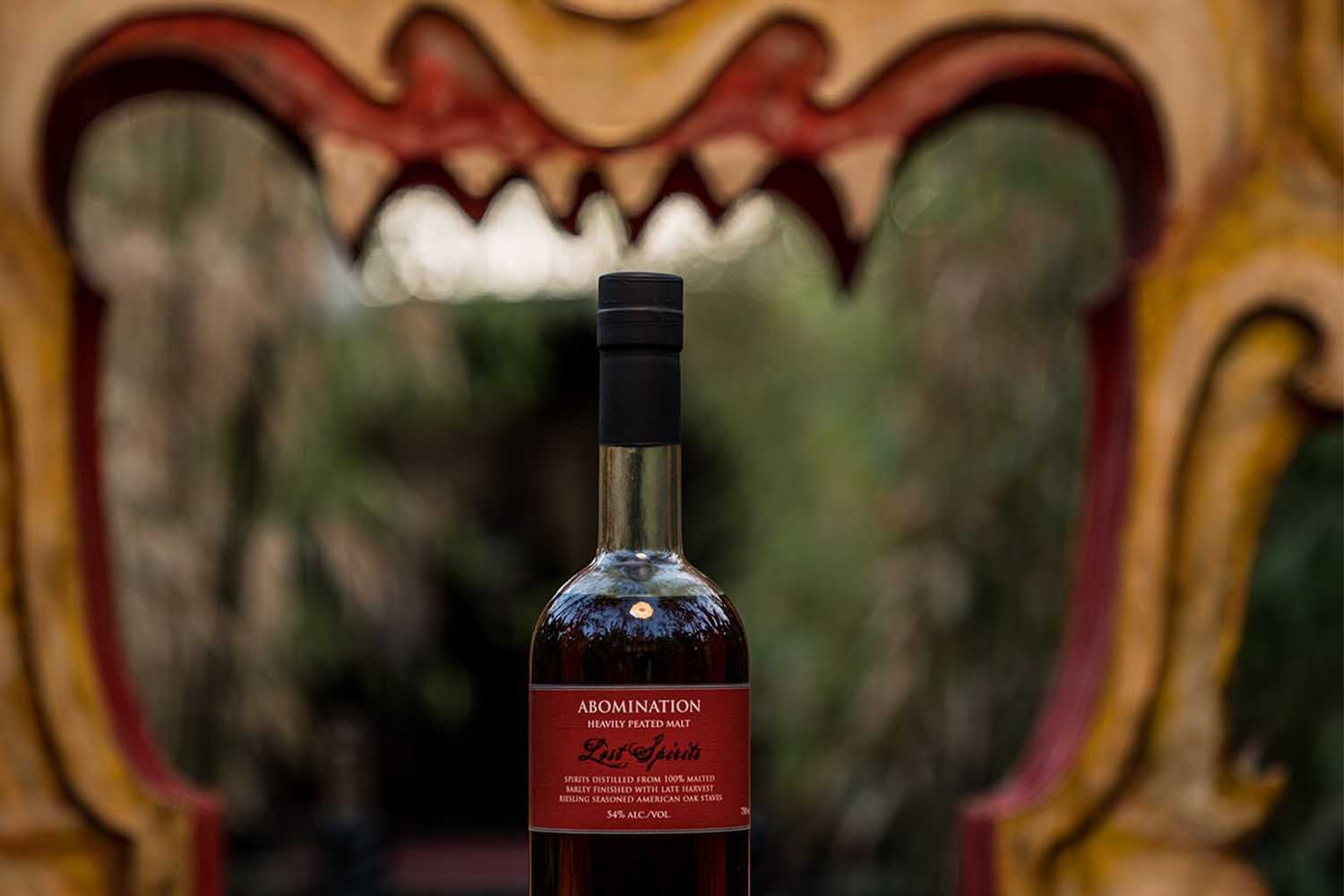 Visitors to the Lost Spirits Distillery Tour have long compared it to Willy Wonka … had he traded his chocolate for hooch. And once you’ve completed the award-winning tour — which just relaunched after closing due to a small fire earlier this year — it’s hard to ignore the comparison. From the wonder to the whimsy to the real-life riverboat ride that cuts through the tour, there’s a strong sense that the great glass elevator is lurking around every corner.

But Willy Wonka isn’t the tortured genius that Lost Spirits takes their inspiration from.

“The things that I love about The Island of Dr. Moreau, what makes the book so fun, is that he’s basically exploring — 130 years ago — the question that will plague humanity for the next 130 years, which is ‘How far is too far with the new unlocked powers that science gives you?’” Davis tells InsideHook. “We’re constantly faced with trying to explore that question, so what I wanted to do is take booze and then ask that question in a really stupid way.”

Part tech company, part distillery and all science, Lost Spirits is a place where profit-driven capitalism gives way to unconventional wisdom and a high tolerance for experimentation. They ask themselves questions that other distillers don’t, like “Instead of aging the spirits in barrels, what if we chopped up those barrels, placed them in the spirits and infused them from within?”

The results speak for themselves. Lost Spirits’ Abomination: Crying of the Puma (named, of course, after a Dr. Moreau chapter) won the 2019 Wizards of Whisky top award. Abomination: Sayers of the Law scored 94 points in Jim Murray’s Whisky Bible (earning it the moniker Liquid Gold). And, perhaps most impressive of all, Lost Spirits has nabbed R&D licenses from nearly every top spirits producer in the country.

While the tour itself has always been a work in progress, constantly evolving from one month to the next, a distillery fire in January forced Brian and co-founder Joanne Haruta to start from scratch. Disaster has provided the soil for opportunity: newly opened to the public, Lost Spirits now pulls back the curtain to show you a world where science and art intermingle without losing a much-needed shot of fun.

Take the trip between the main site and distillery location: guests are ushered into themed, blacked-out vehicles with guides who fill your cup with one of their four outstanding spirits. You and your friends sip and savor as psychedelic screens show LA passing by in vivid neon colors.

Once inside the distillery, the tour gives way to the real star of the show: the distilling process. We watched the distillers blast new booze with concentrated doses of artificial sunlight while seated in a semi-circle of leather chairs, sipping rum as our guide explained the science in front of us. “Just like when the sun breaks down your deck,” she explained.

Next, we were given a peek behind the curtain, into the R&D lab of Lost Spirits. Inside, honest-to-god scientists in white lab coats run experiments to try and find the next breakthrough. Our eyes were drawn to the gigantic whiteboard behind them, where chemical compounds and mathematical equations are scrawled out from floor to ceiling, Will Hunting style.

The Willy Wonka of whisky, Dr. Moreau of moonshine, the Jurassic Park of proof — whatever you decided to label this distillery tour, it’s a must for anyone looking to quench their thirst for something new, fascinating and offering an ABV over 40%.

We’ll drink to that.