Here’s how to prepare this famous regional speciality

“Nine times out of 10, if you go to a bar and you say, ‘Can I get a Wisconsin Old Fashioned?’ if you don’t have any specifications, they’ll usually make it with brandy,” says Tripper Duval, co-owner of Milwaukee’s Lost Whale.

And spirit choice is just the tip of the iceberg. For John Dye, owner of Milwaukee’s historic Bryant’s Cocktail Lounge, “the defining feature” of a Wisconsin Old Fashioned is the addition of soda to the trio of sugar, bitters and alcohol.

Of course, the lengthener is where those aforementioned “specifications” come in. Three options are possible, according to the experts.

“Traditionally, Wisconsin Old Fashioneds are ordered sweet (7-Up/Sprite), sour (Squirt) or press (half seltzer, half Sprite),” says Dye. Sweet is, according to Duval, “the most iconic version of it.” It’s the default, the one you’ll be handed if you don’t append your order with the word “sour” or “press.” It’s also the one they stick to at Lost Whale — and it’s Dye’s personal fave.

For Wisconsinites, Duval says, the Wisconsin Old Fashioned is a staple of pretty much any event.

It’s for this reason that, at their bars, both Dye and Duval have chosen to dress theirs up a bit.

“If we’re gonna offer something that they can literally make themselves and get anywhere,” says Duval, “we feel like we kind of need to do some due diligence and create the drink in a way that they’ve never had before, while still being the flavor profile and the experience that they have with it anywhere else.”

At Bryant’s, Dye says, they start with a secret simple syrup dating back to the 1940s for a unique, subtle flavor, and the drink is served in a one-of-a-kind glass that they have been using for generations. 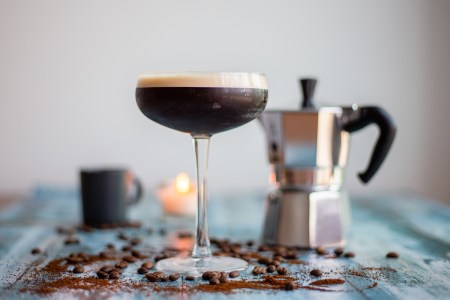 It's official: the caffeinated drink was one of the most popular of the year

“While we usually garnish our Old Fashioned with a cherry and orange, it is not uncommon for guests to request olives,” he says. “In some areas of Wisconsin you will see other garnishes, such as pickled mushrooms.”

At Lost Whale, meanwhile, a Door County cherry syrup is combined with a house-made lemon-lime soda and a touch of fresh lemon and orange juices to balance the sweetness.

“We throw all of that in a keg, we carbonate the entire thing, and we just put it on draft,” says Duval, “so it’s easy, it’s delicious, and the whole thing sparkles.”

However you pour it, one thing’s for sure: A Wisconsin Old Fashioned is just the ticket as the weather gets colder.

“We probably serve the most Old Fashioneds in the winter months — which there are a lot of here in Wisconsin!” says Dye.

Duval agrees. “I think it particularly shines in the fall, just because of the ingredients,” he says, citing the rich spirit and spicy bitters. “However, because we are insane people, we just drink it year-round.”

While he claims that most Wisconsinites rely on store-bought mixes for their at-home Old Fashioned needs, if you’d like to try your hand at mixing up a more artisan version, Duval has shared a modified recipe perfect for home bars.

It starts, unsurprisingly, with brandy — “Wisconsin folks prefer Korbel,” he says. “It’s kind of a heritage thing. Wisconsin has a heavy German population, and back in the late 1800s, those Germans preferred brandy over whiskey. So once Korbel launched, it was a big hit here and a perfect fit in our Old Fashioneds.”

It’s combined with homemade demerara syrup, made with a one-to-one ratio of raw sugar and water, muddled with cherries, oranges and bitters. You can rely on the standard Angostura, but Duval likes Bittercube Trinity, which blends cherry bark vanilla, bolivar and orange with burnt sugar, chamomile and cinnamon.

When it comes to the cherries, it’s your call.

“In most places in Wisconsin people will use what I call ‘nuclear’ cherries, which are the bright red maraschino cherries, aka classic bar cherries,” he says. “At Whale we use dark cherries, either Filthy or Fabbri Amarena.”

Finish it off with classic Sprite — “at home,” Duval says, “there’s nothing better” — and you’re ready to indulge.