Plus: The final word on whether ordering flights is for amateurs 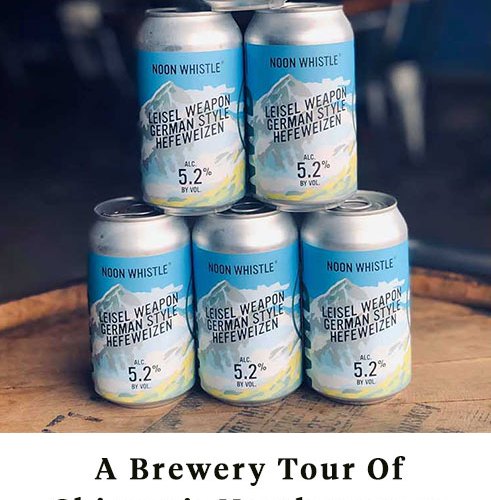 At the latest Great American Beer Festival competition, 10 of the 318 medals awarded went to Illinois breweries, with an even split between Chicago and its surrounding cities. And according to Kate Bernot — a certified beer judge, contributing editor to Craft Beer & Brewing Magazine and reporter for Good Beer Hunting — “there’s really good stuff happening in the Chicago suburbs for beer.”

The biggest thing holding them back from greater exposure is simply logistics. Unlike their urban counterparts, a suburban excursion requires a bit more planning, so we asked Bernot for some tips on the to and from.

“Checking out breweries can be daunting, especially if you are driving, which makes suburban beer its own challenge. But the way I think about it is make sure to plan non-beer activities in between stops, whether that’s lunch or a break in a park,” says Bernot. She also advises to keep it to three spots. Once you stretch to four, you better be using a rideshare or DD.

Then there’s the flight debate. We’ll allow Bernot to break it down: “People like to argue about whether beer flights are a good idea when visiting a brewery, saying, ‘If you have two bites of a burger, how do you know it’s a good burger?’ I, however, think people can do whatever they want. It’s beer, it’s not so serious. If you want to try a lot of different things because you are intrigued by a lot of different flavors, it makes sense, especially if you don’t get out to that brewery very often. It gives you a good general sense of if the brewery is something you’d like to come back to.” She’s outlined the entire argument here if you need more ammo for a taproom scuffle.

With all that in mind, let’s head west of the city in the name of manifest beer destiny. Depending on your location, follow this itinerary from top to bottom or bottom to top. Looking to end the day with dinner? Read from top down. Hoping to start with the trendiest spots? Go from the bottom up.

Owner Mike Pallen pays homage to his music industry roots with “beer inspired by music.” Every beer is named for a song, album or something musical. Fans of ‘90s grunge fans will rejoice at their most popular beer: Smells Like Bean Spirit. Known for their New England Hazy style of IPAs and sweet stouts, Mikerphone surged onto the scene in the over the last decade, picking up accolades from Beer Advocate (One of the Best New Breweries of 2015) and RateBeer (2015 Best New Brewer in Illinois). All from a former landscaping-company HQ inside a giant office park on the side of the highway.

A little-known brewery this is not. “MORE has crazy hype,” says Bernot. “[Hundreds of] people wait in line for their can releases.” WGN even brought a helicopter to cover one. The brewery is best known for Hazy IPAs, but Bernot says to expect new stuff all the time — they are a bit of a trend darling. Use their taproom as a chance to try the style you’ve been most interested in; could be the Hazy IPAs, could be the newer, cooler Milkshake IPAs (made with lactose and fruit) or maybe you’re late to heavily fruited sours (MORE calls them “smoothie-style”).

Noon Whistle’s Leisel Weapon, a South German-style Hefeweizen, earned a bronze medal at the Great American Beer Festival, an accolade Bernot says is very impressive (“hundreds of breweries from across the country compete for a set of awards, and these guys pulled it off”). As of today, it’s on tap and available in six packs and growlers — a perfect chance to taste greatness. If that’s not your style, they have plenty of other options, and Bernot says if they can win big in one category, chances are all the beers are delicious — the brewers clearly know what they’re doing.

This tour covers a wide berth, and the area-at-large is bursting with breweries. Per the expert, we kept our itinerary to three, but if you’ve got different tastes, or want to turn it into a weekend event, consider filling in your map with some of these nearby, honorable mentions:

Canceled, Delayed or Bumped? Here’s What You’re Entitled To.
Defectors to LIV Golf Invitational Series Have Started Teeing Off on PGA Tour
You Should Break Up With Your Partner This Summer. Just Trust Me.
The Answers to All Your Not-So-Stupid Questions About Web 3.0