Crafted by a 12th-generation descendant of Jose Cuervo, De La Viuda has been a Mexican staple for 50 years

From Old Bay Hot Sauce to Frank’s Red Hot Goldfish, the cottage industry around spicy condiments has been heating up to chicken-sandwich-esque levels of popularity in the past few months.

Crafted in Mexico based on a family recipe a widowed mother of four from Jalisco used to hawk from a street cart, De La Viuda (translation: “of the widow”) is made from 100% Mexican peppers and a proprietary blend of spices. Gluten-free and vegan, the red Original flavor is crafted with chile de árbol, while the Green Pepper flavor features a mix of poblano and habanero.

Beckmann, who controls a significant share of the publicly traded holding company that owns Jose Cuervo, Becle SAB de CV, has actually been selling De La Viuda in Mexico for years, but decided the time was right to bring her family’s sauce north of the border (consider that the global hot sauce sales market is projected to surpass $3 billion dollars by 2026).

“The hot sauce category is well, hot. That’s a lot of hot sauce and a tremendous opportunity for the brand,” she tells InsideHook. “There has been considerable growth over the past few years with craft brands like De La Viuda in the hot sauce category. De La Viuda Hot Sauce has been a household staple for more than 50 years in Mexico and we expect it to be very successful in the United States as well.”

To help ensure that success, Beckmann and her team spent an extensive amount of time sourcing the perfect peppers to make sure their new green sauce is on par with the Original.

“The Original hot sauce recipe has been in the family for more than 50 years. We felt that our Green Pepper sauce would be the perfect complement, as both red and green sauces are very popular,” Beckmann says. “There is significant regional variation in the types of peppers used to make hot sauce. Mexican hot sauces focus on the flavor of chili peppers to differentiate the taste. The new sauce is carefully crafted with poblano peppers, which originated in Puebla, and habanero peppers procured from the Yucatán Peninsula. Poblanos have a wonderful flavor but also deliver enough heat to be zesty but not overwhelm your tastebuds. The habanero is a little pepper that has a fruity flavor but packs a burst of heat. Combined, we find that these two peppers deliver a unique flavor and the appropriate amount of spice.”

Finding that appropriate amount of spice didn’t happen overnight, according to Beckmann.

“Let’s just say there was a lot of people looking to eat or drink something that would cool their palate during product development,” she says. “Seriously, we assembled a panel of experts with years of experience in making and tasting hot sauces. It is not uncommon to go through many iterations of samples before we agreed on the perfect recipes that would over-deliver on expectations.”

Pricing her sauce competitively within the category ($14.99 for a four-pack of 5-oz. bottles), Beckmann is confident De La Viuda can become an American staple on par with her family’s tequila business.

“My family has been in the tequila business for 12 generations and the hot sauce business for the last 50 years. We are authentic from Mexico with true heritage and background and our products taste incredible,” she says. “My father was responsible for developing and introducing a very successful hot sauce line when he was still managing Jose Cuervo. I believe having watched him create a truly global brand has prepared me to successfully bring a line of hot sauces to market that I believe is one of a kind.” 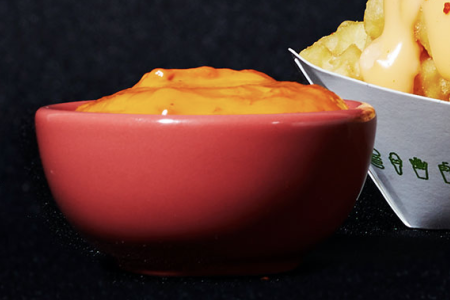