Napa's top florist shares the story of his long career

During a recent trip to Meadowood, one of Napa’s premier wine resorts, a series of naturalistic, stunning bouquets artfully arranged on the cafe tables caught my eye. Great hotels tend to have great flowers, so when the property host mentioned they were done by a local florist, John James, I didn’t think much of it. That is, until another trip to The Madrona, a boutique, historic hotel in Healdsburg, where James’ work with flowers was once again on display. At this point, getting the story of this apparently in-demand florist seemed crucial, even if James explained over the phone a few weeks later that working with hotels is usually just a favor to friends.

“People call me for weddings and parties,” James tells InsideHook. “The work at Meadowood is usually for that. At Madrona, [the owner] Jay Jeffers is a personal friend, so he had me do photos for press releases. But to keep flowers looking the way I want them to look for a week can be challenging, and if you can’t visit once or twice a week, it won’t be up to snuff. So I’m not really the guy that people call for hotel flowers or weekly accounts.” Frankly, that’s because most probably can’t afford the kind of custom, farm-fresh flowers that James creates for the most important moments in his client’s lives: “My centerpieces run $250-$500, so that world can be expensive,” he explains.

Growing up in Southern California, just outside of Long Beach in the then-rural and agricultural community of Cypress, California, he remembers an early fascination with flora and fauna, one that was only deepened by growing up in a plant nursery. “My father built swimming pools for a living, and part of what he did was landscaping,” James explains. “I grew up with parents in the garden, and my father owned a nursery. Flowers and plants have been in my life for a very long time. When I was 10 or 11, I would make flower arrangements and sell them at the front desk, and I had big fat, red hair, freckles and buck teeth, so they sold out really quick.” 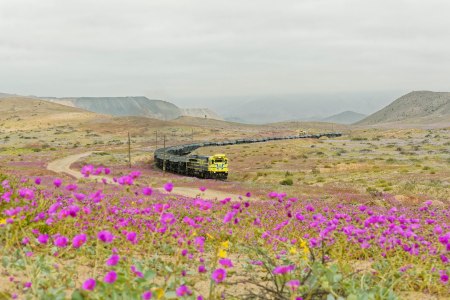 Turns Out the Planet's Driest Place Is Still Home to Flowers

And now it's becoming a national park

On a more personal level, escaping into nature became a balm for James when he attended Pepperdine University in Malibu, where he says he was openly persecuted by fellow students for his queer identity. He remembers seeking out a hidden field of wildflowers, nicknamed The Gulch, for respite, a place of peace to survive those years. Moving after college to San Francisco — a slightly more welcoming town — James quickly got a job working with Stanlee Gatti, where he worked his way up to lead designer. After studying under Gatti, who James deems “one of the most exquisitely talented events designers in the country,” it was eventually time for the younger floral designer to strike out on his own.

Founding John James Designs back in 1997, James has been operating his own floral and events design business ever since, and his business has been quite successful for the past 25 years. That success is due to his rather obvious gobs of talent, but also because built his firm upon principles that can diverge quite sharply from the industry norm. “The difference, to me, is people who believe that the most beautiful expression of flowers is something that can be seen in the natural world,” he says. “Clearly you’re not going to see a flower arrangement in the natural world, but it’s about the way they compete for their own space. The general architecture of a beautiful flower arrangement is inspired by the way it grows naturally.”

His work reflects some innovative ideas about how a centerpiece should look: James is part of a movement pioneering the idea that you can use anything you want in a flower arrangement, like cuttings from blueberry fields, and it will look far better than “what is wrapped in plastic, put on a plane, mass-manufactured, available at Whole Foods, at the flower market, and Costco.” In James’ estimation, two dozen perfect yellow roses in full bloom aren’t as familiar and glorious as the yellow roses in his childhood garden, that were “thorny, smelled like honey and sunshine, with some blooming and some buds.”

In the end, an arrangement from John James Designs stands out because of how similar it will look to flowers that are still growing in the garden. That’s only half the magic, though. The other half comes from the collaboration between designer and client, which kicks off the moment James gets an order. “Part of what makes my arrangements mine is that I do think about you,” he says. “People will say, ‘He’s extraordinarily intuitive,’ but knowing who you’re designing for is really freeing for the artist. How do you do it? You use ultra-fresh ingredients, you know who you’re working for, and just make sure to keep the water clean.”