When's the last time you ordered a Jack and Coke? 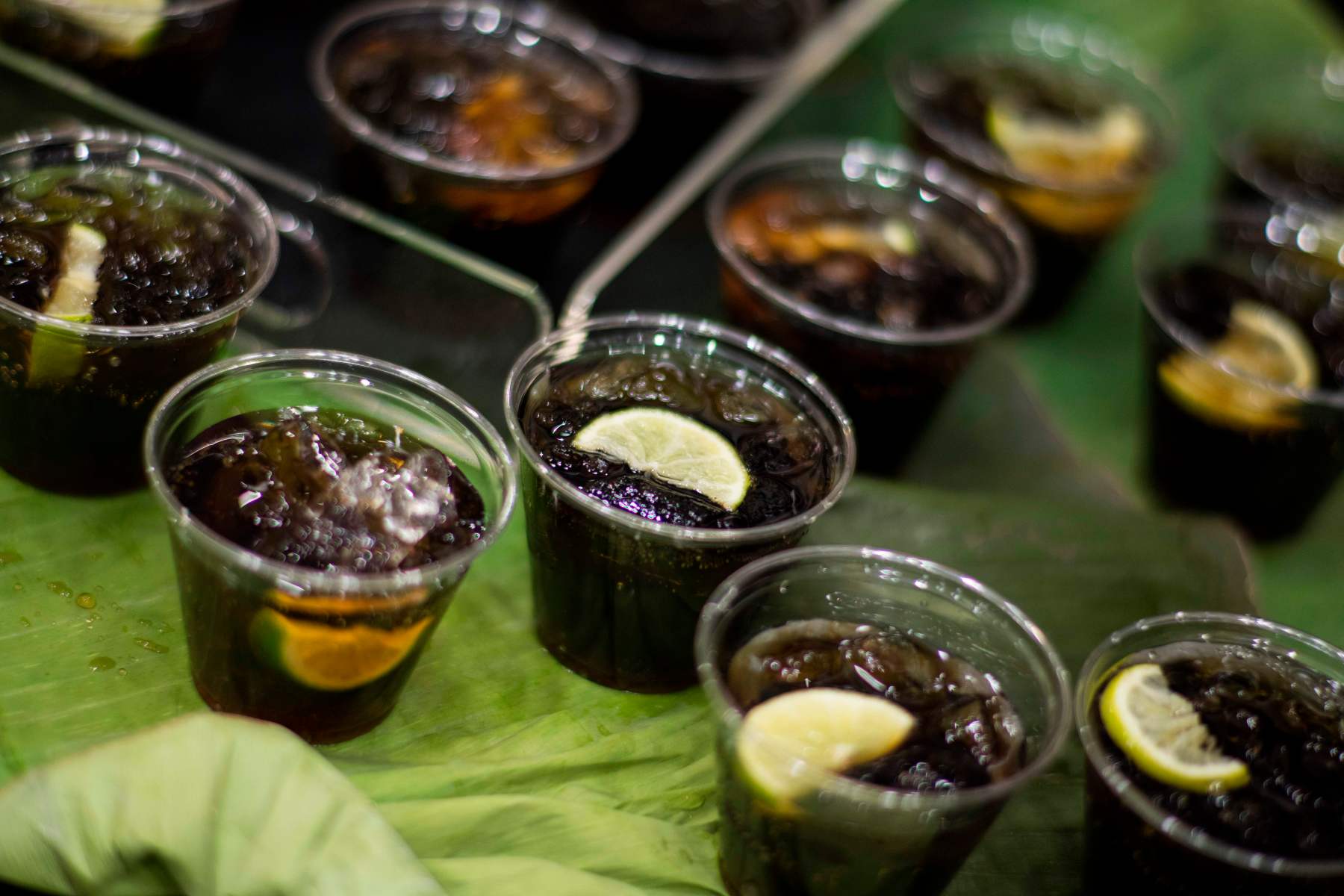 In early January of 2018, on the far west side of lower Manhattan, over-eager men and women who typically introduce themselves by their @ gathered in a studio space with walls painted traffic-cone orange and Prince purple and a floor covered with with ball-pit balls. There was your host for the evening, @girlwithnoname, and its designer @johnlovespinecones, with music from @russelled. Guests could munch on braised short rib made by @fork_knife and, most importantly, sip cocktails from @apartmentbartender. This was the “Diet Coke Flavor Room,” ostensibly a release party for four new flavors packaged in skinny cans, and used in that evening’s “signature” drinks like in the Twisted Mango Highball and Feisty Cherry Old-Fashioned.

“Millennials are now thirstier than ever for adventures and new experiences, and we want to be right by their side,” Coca Cola group director Rafael Acevedo noted at the time.

For a good chunk of 20th-century drinking, big soda was right by everybody’s side, the dominant force in the mixed-drink game. The rum and Coke. Jake and Coke. 7 and 7. Even the Long Island Iced Tea with its mere splash of cola. Soda was certainly a more prominent ingredient at just about every bar than, say, Campari or Chartreuse. Then these modern mixologists had to come along and ruin everything for our beloved giant beverage conglomerates. Suddenly, bars didn’t just scrap soda guns, they scrapped soda altogether. When U.S. soda consumption hit 30 year lows in 2016, Big Soda began fighting back to try yet again to get their ass on a stool at the bar.

“More consumers, most notably adults, are seeking unique and distinct products with sophisticated flavors, quality ingredients, and smaller-scale craft production,” James Quincey, Coca-Cola’s CEO, explained during the brand’s 2017 earnings call. “Mixers are seeing a resurgence in many parts of the world as part of this trend.”

PepsiCo had begun to realize this as well. In the fall of 2016, they opened a restaurant and cocktail bar in Manhattan’s Chelsea Neighborhood (while continually insisting to journalists they were located in the très chic Meatpacking District). Inherently never as big of player in the booze game as Coke — who asks for a rum and Pepsi? — their Kola House hoped to reposition the brand as “craft.” The sophisticated space was created by Lenny Kravitz’s design firm and appearances of the brand’s iconic red, white and blue logos were scarce. Likewise, drink director Alex Ott’s cocktails weren’t merely _____ and Pepsi; instead, each highlighted the bitter, caffeinated kola nut. Like The Intergalactic Peace, made with cognac, rum and tobacco-infused honey alongside kola bitters, which honestly looks perfectly respectable.

That same year PepsiCo introduced the 1893 premium soda brand with two products: Original Cola made with kola nut extract, real sugar and aromatic bitters, as well as Ginger Cola using “real” ginger. Its commercials utilized a sommelier character to introduce the product and position it more as an adult beverage.

“We were inspired by the mixology craze,” explained Chad Stubbs, Pepsi’s then-VP of marketing. “We absolutely see this as a perfect standalone beverage or a perfect complement to cocktails.”

But it’s not just the cola behemoths. Keurig Dr Pepper, owner of the 7UP once so beloved by 7-and-7-sipping Scorsese characters, last year launched their Digital Bartender. The mobile app — which inexplicably isn’t available on any app stores — is said to “up anyone’s master mixologist game.” Mostly, it offers recipes for a plethora of lame drinks that are only made using the lemon-lime soda because they need to be — the “Classic 7UP Margarita” is essentially a normal margarita topped with a half-cup of soda. (The recipe likewise advises shaking vigorously in a cocktail shaker which, as any one who has shaken a carbonated ingredient before knows, well … good luck.)

“7UP aims to make mixing delicious drinks accessible to everyone — no heading out to a bar or fancy mixology tools necessary,” the brand tells me via email. “7UP created the Digital Bartender as a way to showcase its versatility and allow anyone to be a master mixologist right at home.” At the least, it has led to website visitors spending more time on the site.

Nevertheless, a few years after these product releases, bar openings and mobile app launches, it’s become quite evident that they have helped the big soda brands make absolutely no new inroads into the alcoholic drinks market. The new Diet Coke flavors and 1893 are still on the market, but those Feisty Cherry Old-Fashioneds are not exactly ubiquitous in East Village bars. The 7UP app passively chugs along — though it did win a Webby Award this year — while Kola House closed in early 2018.

Meanwhile, in an ironic twist, soda itself is actually slowly becoming hot again at cocktail bars — the only problem is, many people in the cocktail world are disregarding the big brands and flat out making their own. At Buffalo & Bergen in Washington, D.C., Gina Chersevani utilizes a vintage soda fountain to craft such esoteric soda flavors as pineapple-cardamom and bourbon vanilla bean (and, yeah, she makes a cola too). Seattle’s Rumba has a Cuba Libre takeoff that comes off a tap (nice), but uses a homemade cola syrup that GM Jen Akin created by deconstructing Mexican Coke. Existing Conditions in Manhattan famously opened last year with a coin-operated 1960s Coke bottle machine. Unfortunately for the beverage brand, it has been jerry-rigged to dispense the bar’s own bottled cocktails.

Likewise, artisanal soda brands are also cutting into the market by way of the bar industry. Q Mixers, a Brooklyn-based producer of mixers like tonic water, club soda and ginger beer, also introduced their Spectacular Kola several years back. The brand’s overall sales are now growing around 50 percent a year, with incredible demand coming from top cocktail bars all the way down to mid-brow chains like Buffalo Wild Wings and PF Chang’s, which have switched to the brand at their bars.

“‘Big soda’ is challenged in two ways,” believes Jordan Silbert, Founder and CEO of Q Mixers. “First — like fast food — [they have] a long legacy of using cheap, artificial ingredients that mask the subtleties of great spirits and have had a negative impact on society. Second, they try to play as both a soda and a mixer, and as a result, they do neither well.”

Yet, the big brands persevere. Coca-Cola, for one, has decided to lean even more into the mixology game and their intentions are now apparent. This July they released a new line of “Signature Mixers” created in partnership with some of the Europe’s leading bartenders. The mixologists like Max Venning (London’s Three Sheets Bar) and Antonio Naranjo (Barcelona’s Dr. Stravinsky) had previously attended a workshop with the brand where they crafted different recipes to intentionally pair with dark spirits. Each mixer is identified and named by its “notes”— Smoky is meant for spiced rums and whiskeys, while the earthy Woody more meant for lighter rums and woodier whiskeys. The way the brand see it, these will be the “Coke” in the rum and Cokes or whiskey and Cokes of this bar era.

I’m not sure I see it. The current cocktail world was formed as a rejection of things like flavored vodka, canned juice, jarred cherries, soda guns, and, yes, Coke. After nearly two decades, some of those have returned in reimagined forms. But I’m still not sure any time soon, in a hip bar, will you hear a customer finish their drink order with those once ubiquitous words:  “… and Coke, please.”