Inside One of the Most Spectacular and Dangerous Bank Heists in U.S. History

You rarely see it, but some stories truly have it all.

Take Norco ’80, a new work of non-fiction by Peter Houlahan that features depressed 1970s and early-80s America, religious fanatics and, most importantly, a bank heist of epic proportions. Houlahan, leaving out no details, tells the story of one of the most epic robberies in American history, one that went off with many, many deadly hitches. The result is sure to resonate with fans of Jeffrey Toobin’s telling of the Patty Hearst kidnapping and crime spree that followed as well as David Grann’s Killers of the Flower Moon.

Here, in an exclusive excerpt on InsideHook, we find some of the robbers preparing for the heist, the arsenal of weapons they’ve amassed and the early warning signs that no matter how well you prepare for a bank robbery, things always go dangerously — even deadly — wrong.

Inside the Mira Loma House, George Smith and Chris Harven had been smoking weed and working their way through a six pack of Budweiser to keep their nerves down and their courage up. Laid out on the carpet of a back bedroom, an arsenal of weapons and survival supplies were grouped by purpose and ready to be loaded into a half dozen military duffel bags. The two yellow McDonald walkie-talkie radios to be used between Billy in the getaway van, George inside the bank sat off to the side.

Chris, Russ, and George would each enter the bank armed with semi-automatic assault rifles, Chris with his HK93, Russ with the Colt Shorty AR-15, and George with the Heckler .308. Manny would have the riot gun.

The serial numbers on all the guns had been covered up with electrical tape to avoid being readable on bank surveillance tapes. Each of the men would carry at least one side arm, George with a Browning .45 semi-automatic pistol shouldered holstered and another at his hip. Both George and Chris had hundreds of additional rounds of ammunition in fully loaded magazines strapped across their chests. In the front seat of the getaway van, driver Billy Delgado would also have a Colt AR-15 to go along with the .45 Colt automatic handgun tucked into a holster strapped around his right ankle.

For the rifles, George and Chris had made dozens of “jungle clips” allowing them to eject an empty magazine, flip it over, and load a full one in its place in a matter of seconds. Piggybacking three forty-round magazines together up-down-up as George and Chris had done gave the weapon a devastating 120-round capacity, which they were capable of emptying on a target in a little over a minute. Chris Harven alone had seventeen forty-round magazines: 680 extra rounds in total. In addition to this, boxes of extra ammunition, over 3,000 rounds of varying calibers, had already been packed into duffel bags.

Zipped up in two of the bags destined for the trunk of each cold getaway car was survival gear that included map books, compass, water purification tablets, field glasses, mess kits, gas masks, emergency blankets, extra clothing, and insulin vials and three syringes for Russell Harven. Half a dozen hunting knives, a nine-inch Bowie knife, and two machetes were split among survival kits. A Remington hunting rifle with scope and hundreds of rounds of H&H .357 cartridges would go into each trunk. The H&H .357 cartridge was designed primarily for taking down large and dangerous game. In other words, an “elephant gun.”

And then there were the bombs, a dozen twelve-ounce homemade fragmentation grenades, a half dozen sixteen-ounce shotgun-launch versions, three Blue Nun Molotov cocktails, and a curious item that consisted of a cardboard box containing six beer bottles filled with leaded gasoline surrounding a small detonation device. George would bring two of the anti-personnel grenades into the bank, shoved deep in a pocket of his military-green duster.

When they were done loading all the weapons, bombs, ammunition, and survival gear, they moved the duffle bags to the back seat of Chris’s Z-28. George just kept adding more supplies, the last being a Samurai sword with a twenty-three-inch blade sheathed in an ornate scabbard and protected by a gym sock pulled over the handle. George placed the sword in the back seat with the other weapons. Try as he might, Chris could not come up with a single reason why anyone would need a goddamn sword to rob a bank.

Gary Hakala did not know he was in a Kmart parking lot in Riverside County when he heard the side door of the van slide open, but he knew “the dude” they were talking about was him. He was more angry than afraid, but was nevertheless relieved when he was not immediately jerked out of the cabinet, shot in the back of the head, and dumped in an empty field. Hakala still had no idea what the end game was, but he knew it might include killing him somewhere along the way. So far, he had been riding on freeways and side streets for almost two hours with Manny Delgado occasionally jerking the cord around his neck and threatening to kill him while his hands and feet turned a waxy white from lack of circulation.

Chris Harven stuck his head inside the cargo area and looked at the bulging door of the cabinet. You put him in there? he said, amazed that any human being could fit in such a small space.

Where the fuck else was I going to put him? Manny spat, looking nervous, sweaty and jumpy, an unsheathed hunting knife beside him on the carpet. Considering Manny’s condition, Chris figured the dude was lucky to still be alive. Let’s just get this shit in here, said Chris, hoisting the first duffel bag into the back of the van.

Russ and Billy took the Z-28 and the Matador and headed north on Hamner to drop the two cars off at the Little League field parking lot a mile and a half north of the bank at Detroit Street, the van following close behind. The Friday afternoon traffic at Hamner and Fourth Street was heavy, the Security Pacific Bank parking lot on the southeast corner mostly full of customers coming and going. A steady line of cars streamed into the intersection from the west side of Fourth Street where the Naval Sea Systems Command base was disgorging a day shift eager to cash their weekly paychecks.

When they got to the Little League field, Billy and Russ parked the two cars side-by-side in the empty lot, noses facing Hamner just a few dozen feet off the busy avenue. Manny and Billy had stolen two sets of license plates from cars parked at the Westminster Mall the night before, which had been put onto the “cold cars” that morning. If things went according to plan, George and Chris would jump in the Z-28 and head off to Vegas and the others would either go home or head up into the mountains to lay low depending on how hot the situation was after the robbery.

For the first time that day, all five of the Norco bank robbers piled into the van to make final preparations. From inside the cabinet, Gary Hakala could hear hushed voices but could only make out some of the words. Someone was using military jargon: “the mission,” “the objective,” “the diversion.” He could hear a walkie-talkie crackling, maybe even a police scanner. There was movement, unpacking of bags, the sound of people dressing, pulling on jackets, the unmistakable sounds of weapons being loaded and readied. And then the van began to move again.

George Smith worried that it was getting dangerously late in the day. There would be much more cash walking out of the bank on a payday than there would be walking in. It was almost 2:00 p.m. and they still had one more important piece of the plan to execute before hitting the bank.

Chris got behind the wheel and they rolled south on Corona Avenue parallel to Hamner back in the direction of the Kmart. Edging the van down an alley just off Hamner and a mile south of the bank, Chris brought it to a stop behind a strip mall under construction at 1780 Commerce Street. A few minutes after two o’clock in the afternoon, George opened the side door of the van and jumped out carrying a cardboard box containing the six beer bottles filled with leaded gasoline. Hurrying to the back of the building near a wooden shed, George set the box beneath the meter regulating the main source of natural gas to the structure. Using the Zippo, he lit the delay fuse of the detonator and ran back to the van. Let’s get the fuck out of here, he said.

Chris drove off as a spiral of black smoke began to curl up into the air. In a few minutes, the detonator would go off, starting a gasoline fire that would heat the gas main until it exploded. Every emergency vehicle, including the cops, would be at the scene of a gas main explosion at least a mile south of the bank. What occurred behind the building at 1780 Commerce Street just about the time the van was pulling into the Stater Bros. parking lot at Fourth and Hamner was something different than planned. At 2:11 p.m., William Clark looked out the window of his cabinet shop to see black smoke rising from the construction site just across the alley. Clark observed a small flame coming from a box containing what looked like a six pack of beer placed next to the back wall of the building. And then he saw the gas main. While Clark might not have fully comprehended what he was looking at, he certainly understood the severity of a fire burning directly below a gas main. And then one of the bottles exploded with a loud pop, throwing flames ten feet into the air, igniting the wall above it.

While Clark ran to warn everyone at the construction site, a passing motorist saw the flames too, grabbed a fire extinguisher from his truck, and quickly put the whole thing out. By 2:15, a critical part of George Smith’s master plan had ended in a fizzle. It was the first sign that things were about to go very wrong.

Copyright © 2019 by Peter Houlahan, from Norco ’80. Reprinted by permission of Counterpoint Press. 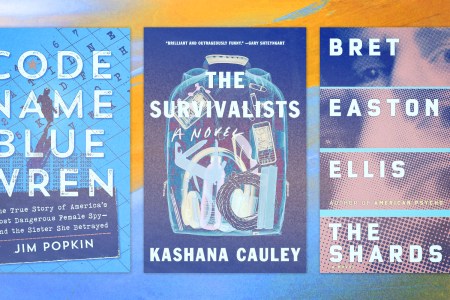