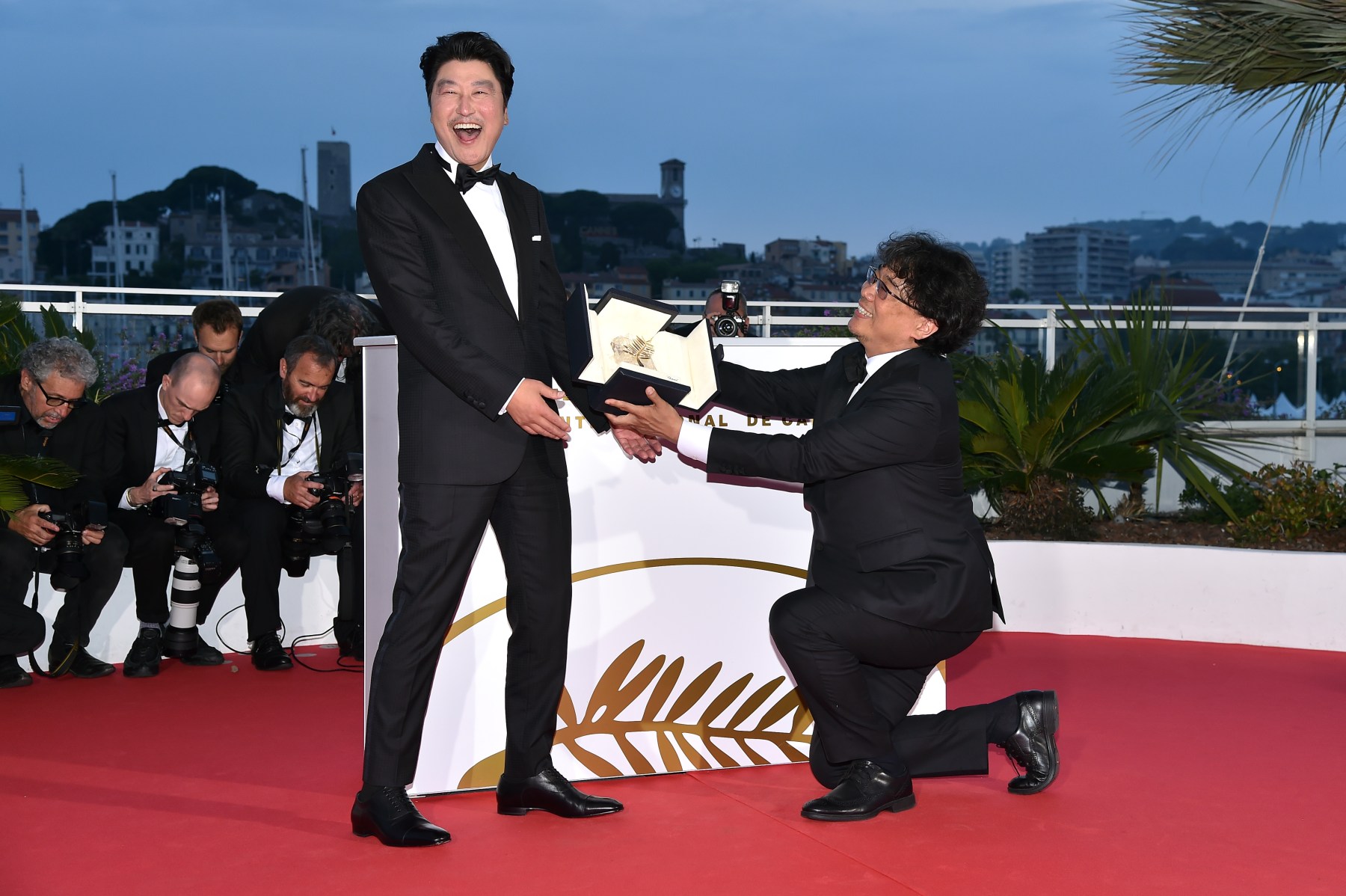 Moviegoers in Manhattan were plum out of luck this past weekend. Parties curious about the hot new release Parasite checked the schedule at the IFC Center, the lone theater in the city screening the film before it goes into a limited release this Friday, and found that every single showtime had been booked solid throughout the entire weekend. The numbers continue to trickle in, but it looks like the record for per-screen average box office will be shattered, foretelling a long and fabulously lucrative theatrical run for filmmaker Bong Joon-ho’s latest work.

It’s the widest exposure a South Korean import has ever received in Stateside cinemas, capping off a run of feats establishing this film as the most successful in Bong or his country’s rich canon. Awash in standing ovations, Parasite waltzed out of Cannes with the coveted Palme d’Or, somehow the first instance of a Korean production taking the festival’s top prize. The film opened in its native South Korea weeks later to an instant number-one standing and a massive windfall of over 10 million admissions, making it one of the highest-grossing releases in national history. The American release has arrived on a wave of glowing press from the sorts of prestige publications responsible for making tastes and advising higher-brow types which foreign films to keep an eye on for Oscar season. Bong’s film will almost undoubtedly receive a nomination for the Academy’s newly renamed Best International Feature Film award, the first Korean submission to do so. If there’s any justice left in this world, it’ll win.

All it took was the most gratuitously entertaining movie of the year, but gatekeeping institutions and the American mainstream have woken up to an open secret known to cinephiles for a couple decades now: namely, that Korean cinema is where it’s at. And with this development comes the proper coronation of a performer many already think of as a movie star: the great Song-Kang ho.

“The cinematic culture in Japan and China was cultivated earlier than it was in Korea,” Song tells InsideHook, a few short hours before Parasite lays out another crowd at the New York Film Festival. “Around 20 years ago, in Korea, these new directors such as Bong Joon-ho and Lee Chang-dong and Park Chan-wook emerged. From then on, I think we began to be liberated. The ‘Korean film’ itself, that idea, began to carry a dynamism. Compared to the film industry in Japan or China, I believe that Korea has seen much more of this dynamic variety.”

That notion of “dynamic variety” does indeed characterize the spectacularly diverse world of Korean cinema, spanning as it does from Bong’s high-IQ genre pictures to the minimal realism of his countryman Hong Sang-soo. It also applies to Song himself, who’s established himself as one of the preeminent actors in his corner of the globe with a measured mix of affability and grit, levity and tragedy. He stars in Parasite as Kim Ki-taek, the patriarch of a low-income family on the lookout for cash-flow opportunities, ethics be damned. One by one, they con their way into employment from the wealthy Mr. and Mrs. Park and get everything they can reach from their side of the class divide.

The role demands a lot of the man playing it, but Bong knew that Song — with whom he’s now worked on four feature films — would be more than up to the challenge. “I think we make each other grow,” Song muses. He excels in tricky different-splitting characters such as Ki-taek, who can crack jokes about his dire financial situation while still seething with rage over it. He steps in to pose as the Park family’s driver, and the scenes taking place in their compact luxury car communicate volumes of resentment without saying a word. He notices his moneyed clients wrinkling their noses at what they’ll later acknowledge as his poor-person smell, and responds with a combination of hurt and contempt. In the film’s shocking climax, it all boils over in a bloodbath of vicious social commentary.

Though he claims to “greatly dislike political things,” Song’s career began in a social theatre group using art to challenge the state, and Parasite returns to that spirit of pointed critique.  “Rather than being specifically about the social reality of South Korea,” Song says, “the cultural forms around the world could be different, but the conflicts brought about by the class gap can be seen in any society and in any country. I don’t think it’s necessarily only showcasing the reality of Korean society … It may seem like Bong Joon-ho is speaking on the differences of the rich and poor, but I think it’s about something much deeper, about our history as humanity. We always have conflict with each other and then reconcile, and what’s left is this incomprehensible but unfortunate class gap that we think we understand.”

Song can see why his latest film has struck a chord with Western audiences chafing under the yoke of capitalism, but he immediately dispels any suspicion that he’s angling for a wider global audience. Though more Americans than ever before are about to know his name, he’s perfectly content with the moniker of South Korea’s “Award Fairy” and steady work with his country’s most virtuosic filmmakers. “[Some] actors work with becoming more famous as the goal,” Song says. “Personally, I don’t think that’s the point. But that’s probably going to change in the future, with these young actors like [co-star] Choi Woo-shik working in both Hollywood and South Korea. They will likely have many opportunities, but I don’t think that’s my generation.”

The rising tide of globalist economics has recently granted Korea a more palpable presence in the American everyday, from the radio domination of boy band BTS to the unslakable hunger for fancier, ever-more-luminous skincare products. Parasite could be seen as part and parcel to this sea change, but if Song’s included, that’s just incidentally. He’s an A-lister in spite of himself, committed entirely to the craft and unconcerned with the trappings of notability. He’s drawn to work that “stimulates a curiosity,” such as 2009’s horror-romance Thirst, in which he portrayed a vampiric priest and appeared in the first scene of full-frontal male nudity for a non-pornographic Korean film. “I like the unconventional,” he says.

Song really has no Western equivalent — there’s nobody blending warmth and sleaze and good humor quite like he does — but purely in terms of the industry space his career occupies, he’s something like a Joaquin Phoenix. Slapping him on a poster can reliably fill multiplex seats, and yet he values his agency to appear in more challenging, prestigious fare catering to a self-selecting audience. “I do enjoy brightly toned comedies,” he says, “but rather than a film that is comedy for comedy’s sake, I prefer films that ruminate on our lives and contain pathos.”

“Having said that,” he adds, “I believe that what story are we going to tell the audience is important. It is also important to think about in what way we will deliver the message, of course, but more pressingly it’s crucial to think about the stories we tell, whether it be through theater or film.”

In other words, he’s one of those actors who spends as much time considering the abstract of movies — how they work, what they mean, why we watch them — as he does making them. If he’s a movie star, then he’s an evolved breed, commanding unparalleled industry clout and using it to get daring, risky productions off the ground. “The difficult work,” he smiles, “is more pleasurable.”

That smile — along with his head of thick, lustrous, beautiful hair — would be the only giveaways to an unwitting passerby that the man’s a screen idol. These two points of conspicuous handsomeness stick out from what would otherwise be an everyman look, suggesting a touch of showbiz glitz offsetting his de-glamorized workaday attitude towards the job of an actor. It’s a fitting look for a thespian with everything available to him, yet intent on keeping the profile he already has. Song Kang-ho could go and take over the world, but he’d rather represent for the home he knows he can always return to.

With unlimited potential and specifically channeled ambitions, Song is perfectly happy right where is, as this year’s de facto ambassador for a vivid vein of Asian cinema. Even as a star, he’s glad to take second billing to the projects themselves. “A Korean film like Parasite, that the international audience can connect with and I can use to communicate,” he says, “I think that’s the right path for me.”