Including the one just added to UNESCO’s World Heritage List 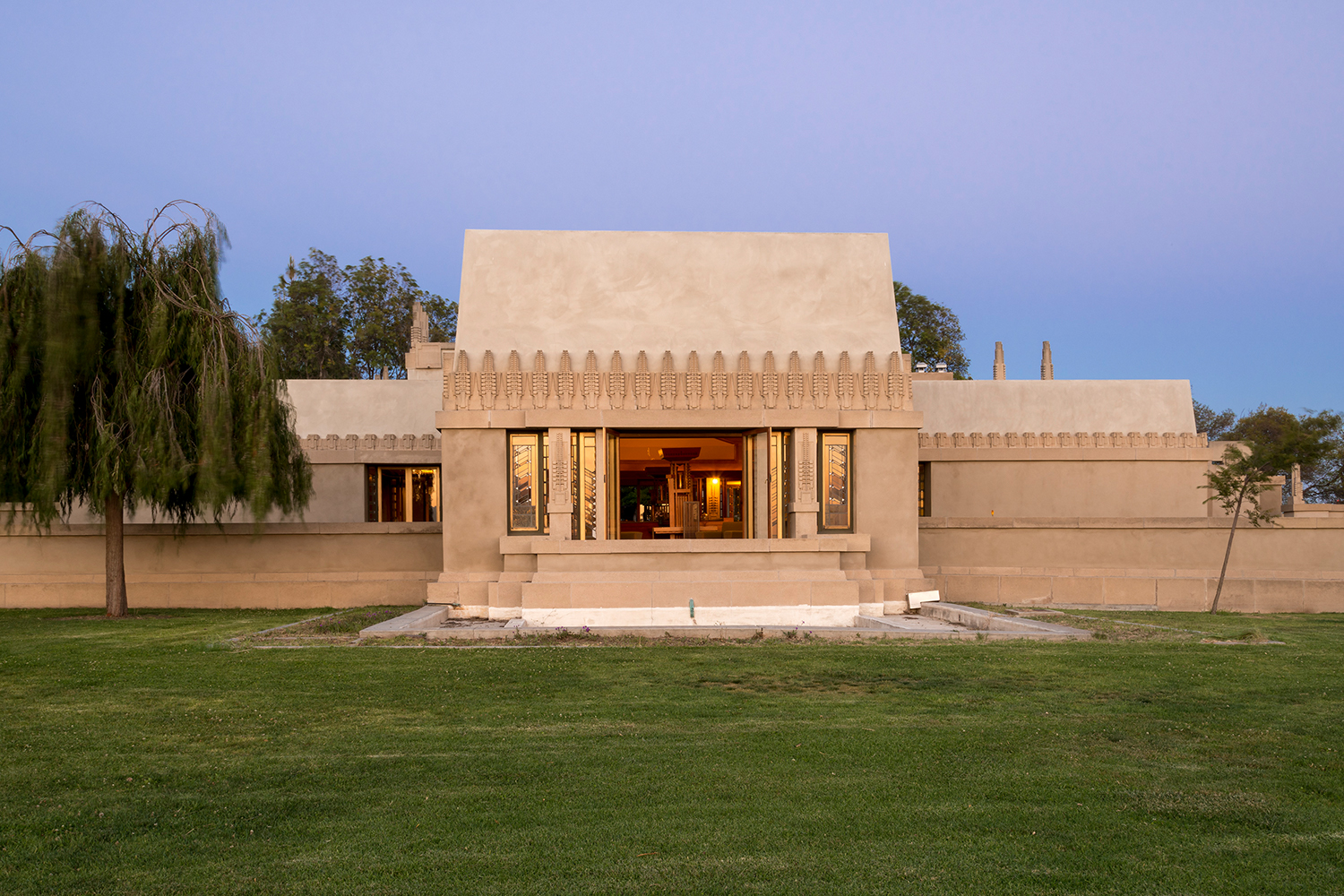 The Hollyhock House is one of eight Frank Lloyd Wright buildings added to the UNESCO World Heritage List.
Joshua White
By Alex Lauer / July 9, 2019 9:15 am

The first was the Prosecco regions of Italy. The second inductee? The 20th-century architecture of Frank Lloyd Wright.

No, not all 532 of the architect’s completed designs. Rather, the designation includes eight of his most celebrated buildings, one of which you’ll find in California. (Previously, the state only held two sites on the list: the Yosemite and Redwood parks.)

Which begs the question: Where can you find the rest of Wright’s West Coast work?

While “The Man Who Built America” is best remembered for his Midwestern roots, his California connection is strong, and underrated. He first opened an office in Los Angeles in the early ‘20s, and his output in the Golden State ranged from a Guggenheim sibling in San Francisco to a house built, miraculously, without any 90-degree angles.

To help you discover his Californian oeuvre for yourself, we’ve collected the 10 must-see Wright buildings in the state, including a golf resort where you can and should spend the night this summer.

Location: Los Angeles (map)
What to know: The one California building included in the UNESCO World Heritage List, the Hollyhock House was built between 1919 and 1921 for oil heiress Alice Barnsdall and is now the centerpiece of Barnsdall Art Park.
How to visit: Self-guided and docent-led tours are available for both the exterior and interior. Normally, tours are only available on certain days, but to celebrate the UNESCO designation, the house is open daily through July 14th.

Location: San Francisco (map)
What to know: While the building, located just off Union Square, was a remodel of an existing structure, it was also a proof of concept for the Guggenheim Museum and includes the same iconic spiral interior. Today, the shop is occupied by Italian menswear brand Isaia.
How to visit: Isaia is open 10 a.m. to 6 p.m. from Monday to Saturday, and 12 p.m. to 5 p.m. on Sunday

Location: Stanford (map)
What to know: A testament to Wright’s dedication to the American middle class, the Hanna House was built for Stanford professor Paul Hanna and his wife Jean. The building is also known as the Hanna-Honeycomb House for its unique hexagonal structure — no right angles were used in the floor plan.
How to visit: Tours are currently on hold. Check here to see when they will recommence.

Location: Clio (map)
What to know: The teepee-inspired clubhouse was originally designed in 1923 for Wisconsin’s Nakoma Country Club, but it never came to fruition; that is, until the plans were purchased in the ‘90s and finished in 2001 … in California.
How to visit: Open to the public year-round, whether for golf, lodging or both.

Location: San Rafael (map)
What to know: Immediately identified by its blue roof, the Civic Center was on a 2016 list of Wright’s buildings considered for UNESCO World Heritage Site designation that was rejected. Nonetheless, it is both a state- and national-designated landmark.
How to visit: 90-minute docent-led tours are available every Wednesday and Friday at 10:30 a.m.

Location: Redding (map)
What to know: According to the church’s website, Wright accepted the commission while working on the Guggenheim Museum, quipping, “Tell the people of the little church that I will help them out. If I like the ‘feel’ of the job, I‘ll take it.”
How to visit: Open to the public, with services taking place Sunday mornings.

Location: Los Angeles (map)
What to know: Completed in 1925, underwent $17M in restoration since and starred in the original Blade Runner.
How to visit: It’s currently on the market for $23M, which means you could potentially schedule a showing …

Location: Carmel (map)
What to know: Located on the ocean, it’s a consummate example of Wright’s “organic architecture” concept.
How to visit: The house is open to the public one day a year for a fundraiser put on by the Carmel Heritage Society. Unfortunately, the last one was on June 22nd.

Location: Beverly Hills (map)
What to know: It is Wright’s final completed work in Los Angeles.
How to visit: There are no official tours, but you can visit during retail hours.

Location: Pasadena (map)
What to know: Also known as “La Miniatura,” the 1924 home was Wright’s “first attempt at modular building.”
How to visit: It’s a private residence, so don’t bother the owners. But as the Architect’s Newspaper points out, the right bottle of wine (and an open schedule) might get you an unofficial tour.