In Northampton, Mass, the police show you where to park — with a smile 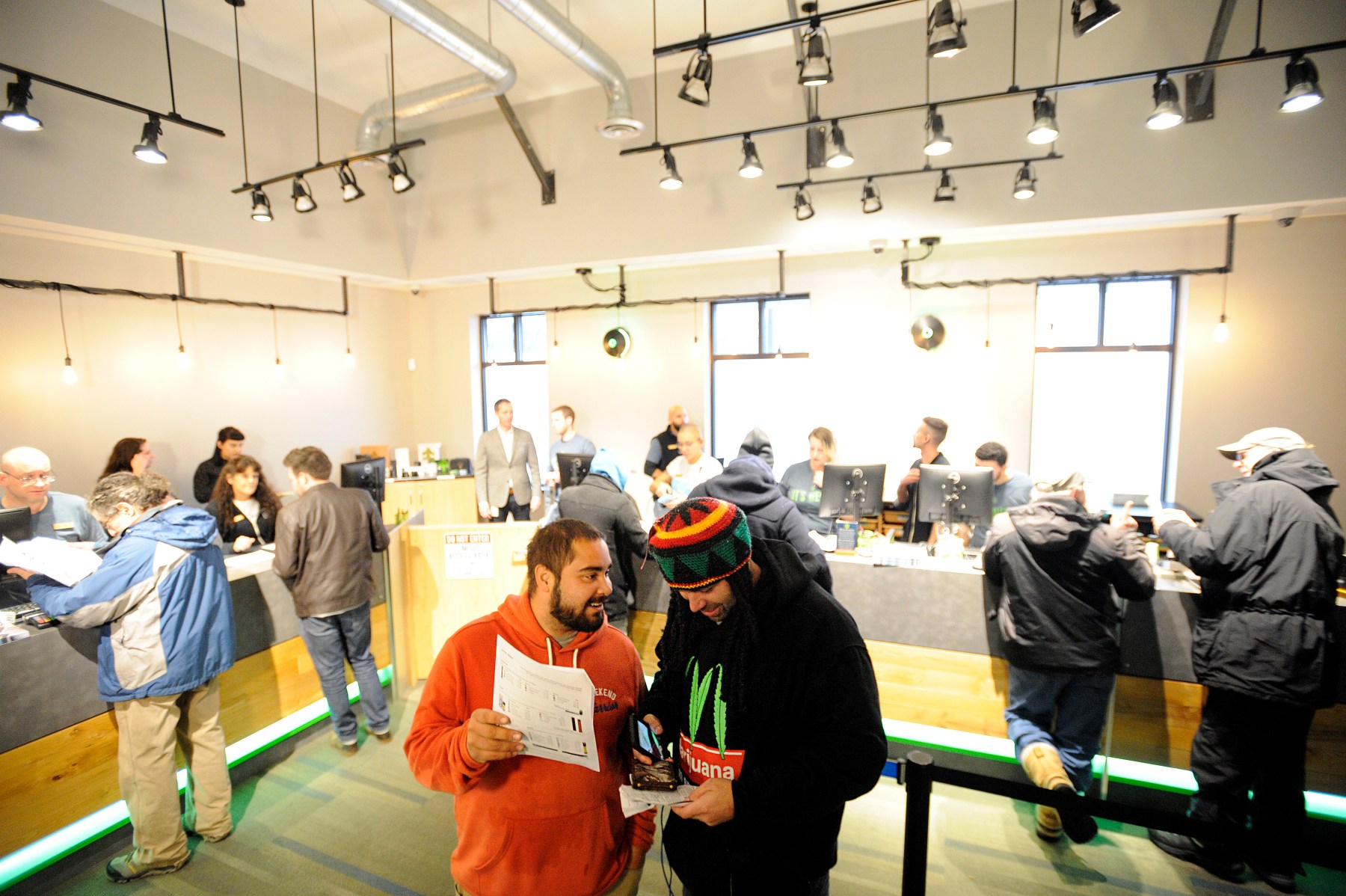 My history of buying weed probably isn’t that much different from other Americans, save for some slight variations in time and place. I made my first purchase at 14, a nickel I bought from an older BMX rider who we found out was once a straight-A student on his way to a legacy spot at an Ivy.

A year later, I was in a dorm room in the prep school not far from where I lived, upgrading my purchasing habits by buying a dime from a 17-year-old who everybody claimed had the best stuff in the area and was the exclusive supplier to a coach of one of the city’s beloved sports teams.

For most of my teenage life, buying pot was a shady experience that involved little plastic baggies being pulled out of socks as we looked around to see if police or teachers were watching the transaction. It wasn’t until I was 18 and away from the suburbs that I discovered the joys of the weed delivery service, where a person came to your house with different strains to choose from. It made the whole experience of buying illegal drugs feel a little less scandalous.

For the bulk of the last 20 years, I’ve used a number of different delivery services, finally settling on one in Brooklyn that I was told “Park Slope parents love,” because of its wide variety of higher-quality product, and packaging that makes it look like a luxury good and less like, well, illegal drugs.

But what happens when you buy cannabis products for the first time when they aren’t illegal? How does weed-buying change in a store, an actual physical customer experience, in a state where buying an illicit substance for your anxiety is totally and utterly OK?

Well, for one, there are cops. And they’re there to help.

That was the first thing I noticed when I drove a little less than an hour over the border into Northampton, Massachusetts, to visit Neta on 4/20. Neta was one of the first recreational marijuana dispensaries to open in the state last year, two years after legislators voted to make marijuana legal back in 2016. After 20 years of ingrained paranoia over buying weed illegally, a cop was smiling and giving me a tip on where to park my car — to buy weed.

“Have a good one,” said the officer, holding a rainbow polka dot umbrella (Never change, Northampton) to shield himself from a driving April downpour. I just smiled. Even though I kept reminding myself that what I was doing was perfectly legal, I still felt my heart racing. Buying what’s mostly harmless but still against the law did always have some little bit of thrill attached to it. Now, on 4/20, in one of the most liberal cities in America, just being able to talk to a cop right before I was going to openly purchase two grams of Black Triangle kush flower, some other strain that was lower in THC, some CBD 1:1 vape cartridges, as many THC chocolate bars as they’d allow me to purchase, other various edibles and a couple of Bruce Banner pre-rolls, was a little on the odd side. Did I mention that I’d used Neta’s handy website to place a pre-order to skip the line?

Regardless, nothing could prepare me for the actual act of going to a dispensary that would accept debit card for a shopping list of cannabis.

I was able to forgo the longer line, which was being directed by staff à la Trader Joe’s. A greeter checked IDs at the door and kept the room feeling calm and spacious by only letting a few patrons in at once. The line, I should mention, was incredibly diverse, with people from every walk of life queued politely: folks from the nearby city of Springfield, students from Smith and Mount Holyoke, a few middle-aged-looking moms in North Face, 30-something guys in cargo shorts, and one guy who pulled up in a Range Rover wearing a pair of selvedge denim jeans, a cashmere sweater and an Omega Speedmaster Professional I clocked immediately. Some looked like classic stoners, others looked like they were going to try weed for the first time. I thought to myself as I bypassed them — smug with the good sense to order beforehand — that the line for legal weed was an all-inclusive one.

Since the only thing close to a legal transaction I’ve ever made when it comes to weed was buying paraphernalia, I’ll admit that my initial idea of what Neta was going to look like when I stepped inside was just a step above the countless head shops filled with dust-covered skull bongs and corny 4/20 merchandise I’ve visited over my life.

What I was not expecting was to find Edison bulbs hanging from the ceiling, wood-paneled walls and spotless glass cases filled with sleekly packaged vape pens. The staff, too, consisted of young, good-looking and mostly energetic and engaging people. One handed me a menu of the daily goods when I walked in, while the guy behind the counter chatted with me for a moment or two, not trying to upsell me anything, just relaying his experience with a certain product they carried that I was curious about. In essence, the first legal recreational weed dispensary I visited looked like a high-end menswear boutique Soho, Williamsburg, Silver Lake or Austin. There were no Bob Marley wall tapestries or six-foot bongs to be seen. The only thing Neta sells is cannabis products, the kind that is definitely of a higher grade than about 80 percent of the stuff I’ve purchased over my life, all grown in the “most advanced indoor cultivation facilities in the industry” in nearby Franklin, Mass.

When I walked outside with my white paper bags full with these newly legal products, I felt strange. Weed is big business now, but I still can’t wrap my head around it, having grown up in the “Just Say No” era. There was always something subversive about buying and using weed, and I’ll admit that was probably my first reason for trying it. Everybody I liked smoked weed, from Bill Murray to Miles Davis and Joe Strummer; it was rebellious without actually being that dangerous, at least when compared to some other substances people I knew started trying. It was fun and funny: the whole reason movie characters like Cheech & Chong, Jeff Spicoli, Jeffrey Lebowski, Jay & Silent Bob and Harold & Kumar were all so hilarious and iconic was because they were stoned, yes, but also because they were doing something illegal.

But today, the rebellion is being stripped away. Cannabis companies are being sold for close to a billion dollars. There are beautiful lifestyle magazines dedicated to weed. You can book a “420-friendly” Airbnb. You can get CBD treats for your dog and CBD hummus to dip your CBD knockoff Doritos into. John Boehner is really into trying to get weed legalized.

I wouldn’t call what I was feeling guilt (except when you consider the number of people of color incarcerated for minor drug offenses, many of which include marijuana possession), but there was some sense of closure when I got in the car with my bags of edibles and vape cartridges. I realized that I’d been doing something the same way for over 20 years, and that’s changing. And while it’s absurd I live in the most anxious city in North America and marijuana isn’t legal, I get the feeling it’s only a matter of time before I’ll have a place like Neta right between my local slice place and the bodega.

And yet, once I crossed state lines back into New York, I knew my cannabis purchases would go right back to being an illicit activity. I’ll probably visit places like Massachusetts or Vermont again in the near future since they’re both relatively close, but until then, I’ll go back to being a minor criminal, always thinking back on what a pleasant experience it was in Northampton, Mass., having a police officer show me where to go to buy my weed.