It’s become a sight all too common:

It’s ironic — that the device we’re all glued to is nominally meant to connect us.

Internet addiction is real, and in its wake, membership in community organizations is down, and people are reporting greater feelings of anxiety and isolation than ever before.

One way to solve this problem? With more screens, games and virtual reality. And maybe some booze.

All of which is on offer at the new Two Bit Circus Micro Amusement Park in the Arts District. The 40,000-square-foot space is intended to bring people together for collaborative gaming, much as circuses and carnivals did decades ago. By pulling on influences from the midway, ‘80s arcades and immersive dinner theater, Two Bit Circus has given social interaction top billing.

“The circus is a celebration of human capacity,” says CEO Brent Bushnell. “You’d go to the circus to see how we can swing in the air and do amazing things. Our setup continues on that train, celebrating our human capacity to have fun.”

Started by Bushnell and Eric Gradman in 2012, the company made it name designing interactive experiences for companies like Intel, Samsung and Warner Brothers, along with professional sports organizations the NBA, NFL and NASCAR.

“We made a cloud that rains tequila for Mexican Board of Tourism,” recalls Bushnell. “We made things that we dragged around to Amazon’s holiday party and the like, and then we decided, ‘Let’s put all this stuff in one place.’”

InsideHook has featured numerous activations they’ve done locally, from a prohibition-themed dinner party to a six-person story room to an educational carnival a la the Two Bit Foundation, which will be open to students at various times during the day.

The Foundation is a dedicated 501c3 nonprofit consisting of four parts: teaching kids STEAM (Science, Tech, Engineering, Art and Mathematics) so they can build their own games and throw their own carnivals, educating teachers on how to incorporate STEAM into their coursework, building labs with these tools and donating unused materials from local businesses that are typically sent to landfills.

For instance, See’s Candies produces too many heart-shaped boxes every Valentine’s Day. Instead of throwing them away, they give them to the Foundation, where kids can incorporate them into art or engineering projects. “It’s blowing up,” says Bushnell. “We have support from Annenberg and Boeing, and we’ve brought them to Hawthorne, Dallas and even South Korea and Australia.”

The numbers are impressive. Since starting last year, they’re in 298,620 schools, have trained 4,977 teachers, diverted 520 tons of industrial waste from landfills and completely reversed how kids feel about STEAM courses.

Much of what’s on offer at the Micro Amusement Park will seem familiar, but with upgrades that aren’t only cosmetic innovations, but ways to get people to play and interact with strangers. Air hockey is a four-person experience rather than two; instead of throwing darts at balloons, you throw multi-colored balls at images of balloons that change depending on the color of the ball you throw. (And skee Ball is, well, skee ball. Some things are sacred.) 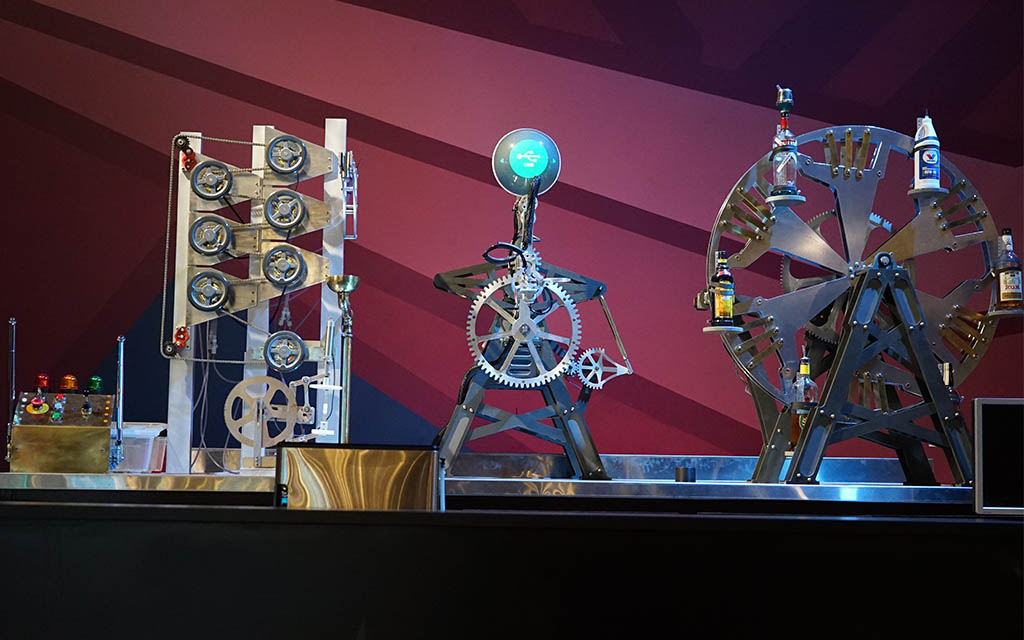 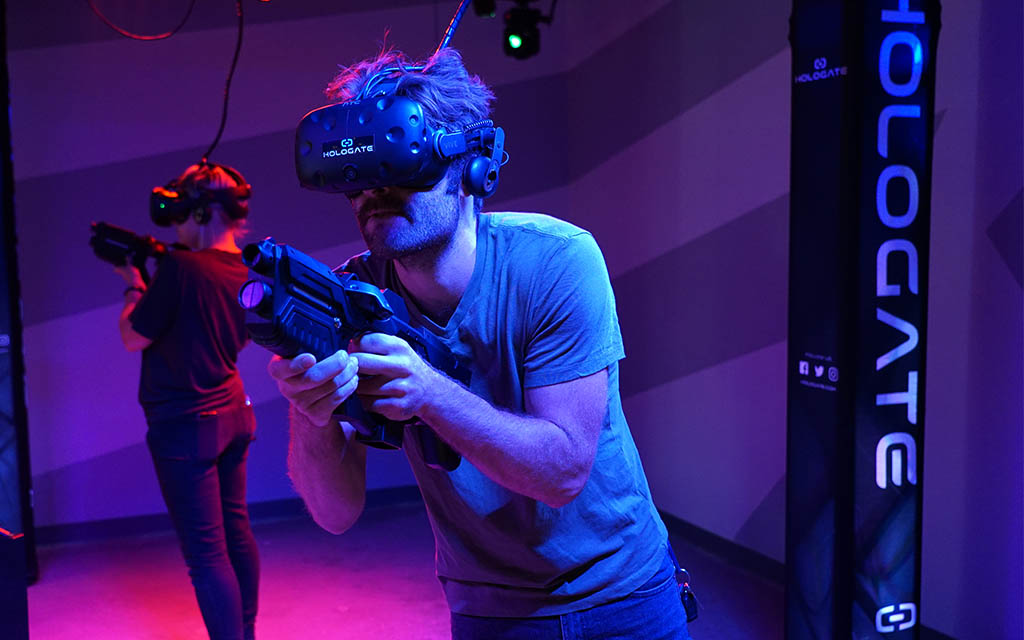 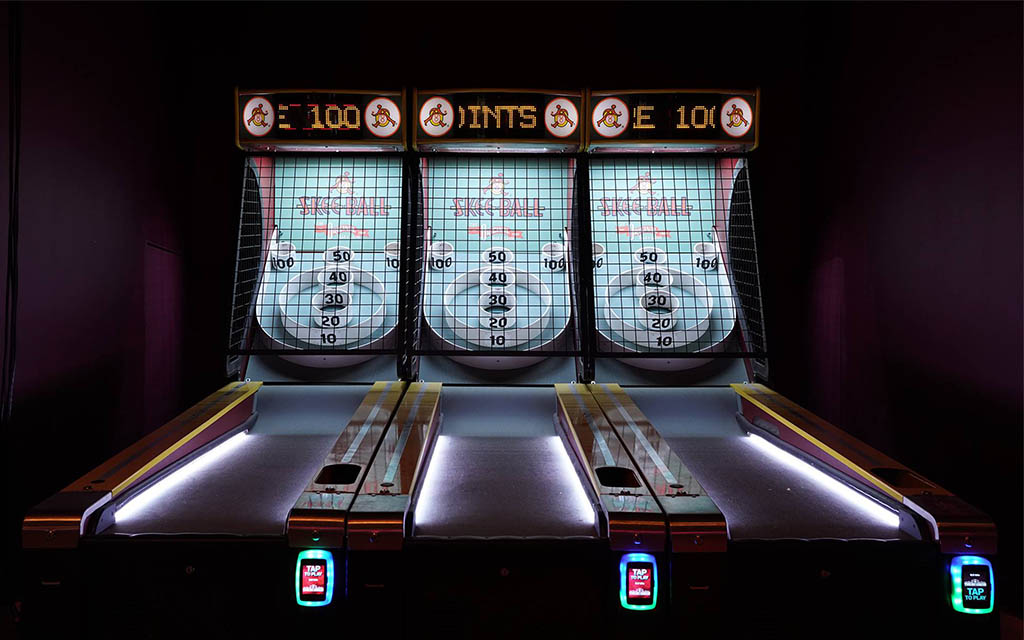 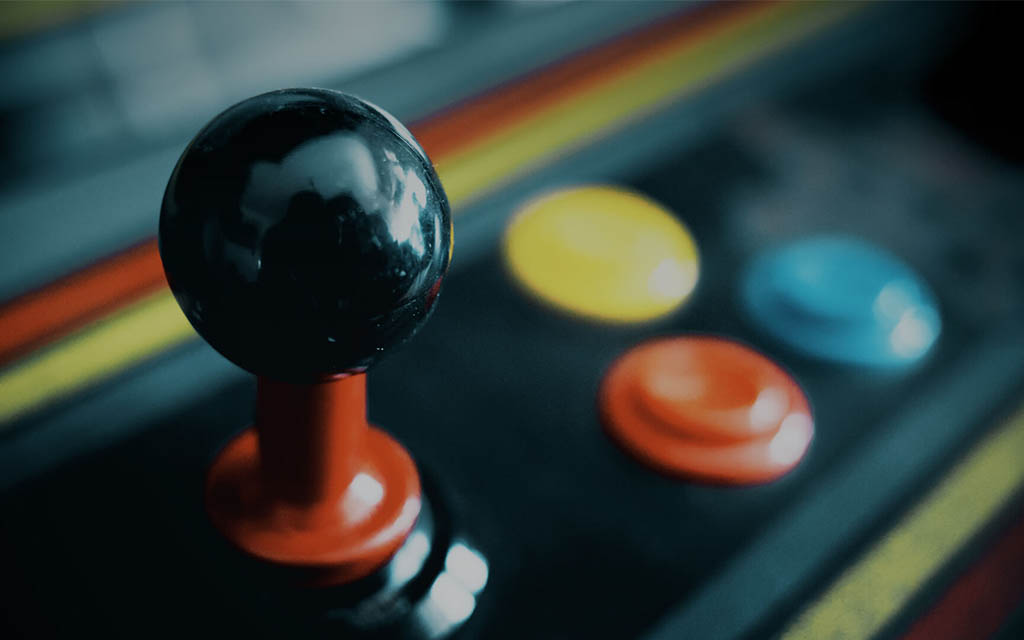 But this is just scratching the surface. There are three “story” rooms (a space command center, an Egyptian tomb and a zombie swamp) akin to escape rooms. There are 16 VR bays, each able to upload new games as they come available or be taken over by outside gaming companies that want to gain real-time feedback on their concepts.

And there’s a large theater room called Club01, which runs interactive game shows: e.g., participatory wine tastings or a trivia challenge that tallies scores in real time via touchscreens at each seat. Immersive theater experiences also happen all over the Park. “There’s no Pantages for immersive theater,” says Bushnell. “So we built secret areas and ways for this place to be exactly that.” 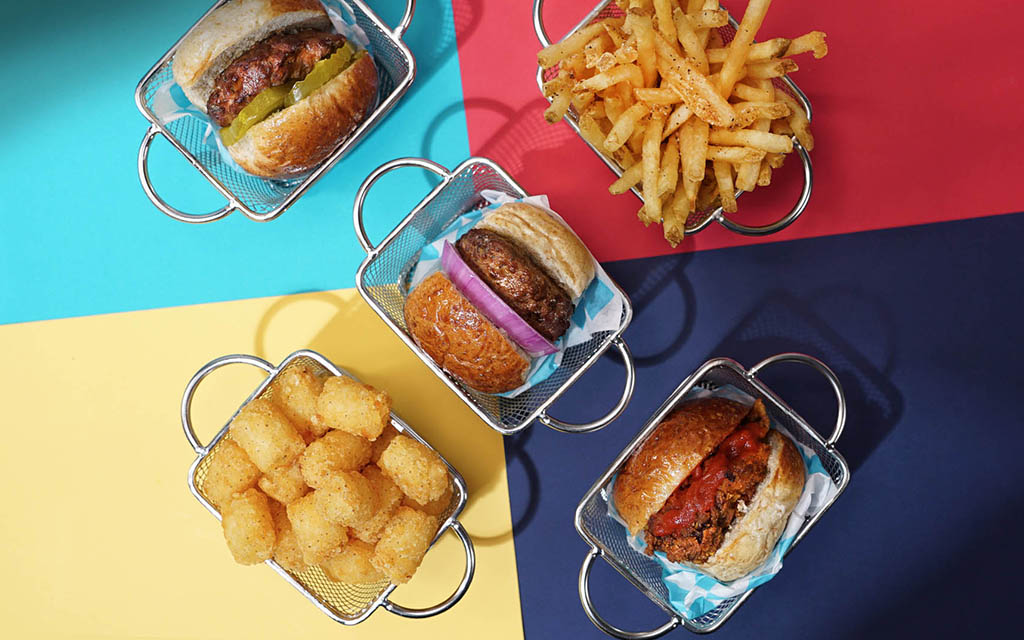 Like any carnival, Two Bit also offers great eating and drinking options. Cocktails are mixed by Gearmo del Pouro the Robot Bartender, and there are 16 taps stocked with craft ales. The food, which they tongue-in-cheek refer to as “farm to circus,” consists of sendups of carnival classics, like corn dogs made with Diamond Ranch meat or funnel cake bites, all from a chef who previously held a stint at The French Laundry.

There’s also a meta game interwoven into the entire space: look hard enough, and you’ll find Easter eggs that dig into the mythology behind the Park.

“We’re a movie theater for interactive experiences,” says Bushnell. “A next-level circus that aims to remind people how we can share wonder and have fun together.”

Tickets for the beta month of Two Bit Circus are on sale now. Their official opening is slated for early fall.