Should two Super Bowl wins outweigh more than a decade of mediocrity?

On Thursday night at MetLife Stadium, Eli Manning threw an interception on the second play of the game, the 232nd pick of his career.

Now 15th on the all-time interceptions list (just one behind Warren Moon at 14th), Manning is clearly on the 18th hole in his 15th NFL season and many are calling for the New York Giants to part ways with the two-time Super Bowl winner, possibly this offseason.

If they do and Manning, 37, does decide to hang up his cleats for good, the clock will start ticking on the five-year waiting period until No. 10 is eligible for election into the Pro Football Hall of Fame.

If he gets in isn’t really that much of a question as the Pro Football Hall of Fame Selection Committee is sure to take a look at his (as of this writing) 345 touchdowns (seventh all-time) and 53,344 passing yards (sixth all-time), and punch his ticket to Canton on the spot.

What is more of a question is if they actually should.

There’s no disputing that Manning was exceptional during his teams’ Super Bowl runs in the 2007 and 2011 seasons. But other than the touchdowns and passing yards, most of his career numbers are fairly mediocre. 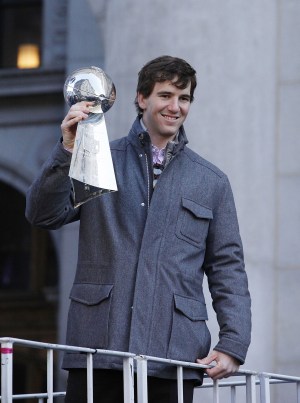 Early in his career based on his stats, ProFootballReference’s “Similar Players” metric (which uses analytics to find players whose careers were of similar quality and shape to the player in question) has players like Brett Favre, Tom Brady, and John Elway listed as comps for Manning.

Of the names on that list, only Bradshaw and Aikman are in the Hall of Fame and neither one likely would be if not for their Super Bowl records (4-0 for Bradshaw and 3-0 for Aikman). And they both at least won playoff games outside of the years they won Super Bowls, something Manning has never done as he is 0-4 in the postseason outside of the ’07 and ’11 seasons. 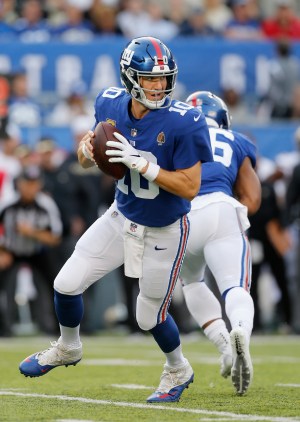 Out of the other names on Manning’s “Similar Players” list, only Roethlisberger really has HOF credentials (and that’s even up for debate). McNair, Romo, McNabb, Bledsoe, and Palmer were all good and had decent, if above-average, NFL careers, but none of them were great.

For someone to be a surefire Hall of Famer, they should — at least in one point in time and hopefully for much longer than that — have been one of the best players at their position in their respective sport.

Thanks to players like his brother, Brady, Aaron Rodgers and Drew Brees, Manning has never really been that despite his gaudy numbers.

Except, of course, during two games in February when he was winning MVP honors in Super Bowls XLII and XLVI.

Whether he really belongs in there with all-time greats like Joe Montana, Dan Marino, and his brother Petyon (once he is voted in), is another matter entirely.