Approximately a month after Nike announced that it was suspending its ties with Kyrie Irving over his decision to tweet a link to a propaganda film containing antisemitic material and his subsequent refusal to directly denounce the hateful material in the film, the shoe and athletic apparel maker officially ended its relationship with the Brooklyn Nets point guard on Monday.

“We have mutually decided to part ways and wish Nike the best in their future endeavors,” Shetellia Riley Irving, Irving’s agent, told CNBC.

Taking the floor for the Nets on Wednesday night in Brooklyn for a game against the Charlotte Hornets, Irving wore a pair of taped-over Nikes proclaiming his freedom from making millions of dollars to wear the brand’s sneakers. “I AM FREE Thank you God…I AM,” was written in gold marker on Irving’s sneakers during Brooklyn’s 122-116 victory over Charlotte. The other side of his kicks read ”logo here.” (The Nikes Irving was wearing were not his most recent Kyrie 9 signature shoes, but instead a pair of Kyrie 3 “Raygun” sneakers, which were originally released in 2018 according to Hypebeast.)

Thanks to the split with Nike, Irving, who enjoyed being compared to Vietnam freedom fighter Muhammad Ali for his refusal to get vaccinated against COVID-19, is now free from making an extra $11 million annually as a Nike athlete. Irving’s recent sneaker choice and social media posts indicate he isn’t too broken up about it.

“Anyone who has even spent their hard-earned money on anything I have ever released, I consider you FAMILY and we are forever connected,” Irving wrote on Twitter. “It’s time to show how powerful we are as a community.” 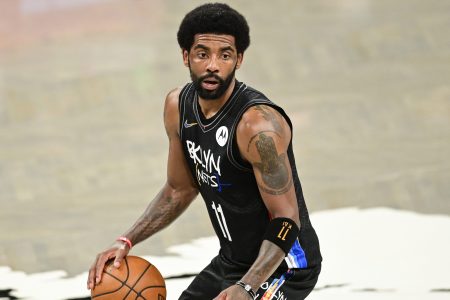 Love him or believe he’s a raging antisemite who thinks he’s smarter than everyone else because he believes the world is flat, you’ve got to give Irving credit for being willing to lose his money over where he puts his mouth as his loss of income from Nike comes on the heels of turning down $100 million from the Nets so he wouldn’t have to get vaccinated. Instead of taking the $100 million deal after the Nets gave him “an ultimatum” about getting vaccinated, Irving suffered through a “tough pill to swallow” and opted into a one-year contract worth $36.5 million. Afterward, he made his position quite clear.

“I understood all the Nets’ points,” Irving said. “I respected it and I honored it and I didn’t appreciate how me being vaccinated, all of a sudden, came to be a stigma within my career that I don’t want to play, or I’m willing to give up everything to be a voice for the voiceless. And which I will stand on here and say that, that wasn’t the only intent that I had, was to be the voice of the voiceless, it was to stand on something that was going to be bigger than myself.”

At least Irving had some kind words for someone who is actually now free from something horrible, Brittney Griner.

This NBA Star Is Using Wine to Advocate for Prison Reform