Sitting at a not-so-nice 6-9 on the season, the Raiders will start Jarrett Stidham at quarterback

Davante Adams will still be in Vegas after Derek Carr is gone.
Cooper Neill/Getty
By Evan Bleier @itishowitis

The NFL leader in interceptions with 14 in 15 games this season, quarterback Derek Carr is being benched by the Raiders for the final two weeks of the season and appears to be well on his way to permanently leaving Las Vegas. There are multiple reasons for the Raiders to sit Carr, who has already stepped away to “avoid the obvious distraction,” but the biggest one is the team would owe him $40 million in guarantees if he got injured in the final two weeks of the season.

While head coach Josh McDaniels said Carr’s future status with the Raiders has yet to be determined, the clear implication of the 31-year-old’s benching is that the all-time franchise leader in passing yards and passing touchdowns will not return to Las Vegas in 2023 and could potentially be replaced by Tom Brady or Jimmy Garoppolo (both of whom played for McDaniels while he was the offensive coordinator of the New England Patriots).

Star wideout Davante Adams, who has been close friends with Carr since the two of them played together at Fresno State, is unhappy about his buddy being benched in favor of third-year player Jarrett Stidham as the Raiders attempt to assess some of the younger players on their roster. Adams, who has 88 catches for 1,290 yards and 12 touchdowns this season after being traded away from the Packers during the offseason, vented his frustrations on Instagram…

Speaking to The Associated Press, Adams indicated Carr was one of the reasons he turned down a long-term contract offer from the Packers to spur a trade to Las Vegas and take less money with the Raiders. “I don’t think anybody was excited about it in here,” Adams said of Carr’s benching. “I wouldn’t be here right now if he wasn’t here. I think everybody knows how I feel about him.”

The six-time All-Pro can post and say whatever he wants, but if he’s catching passes from Brady next season, he’ll get over it. 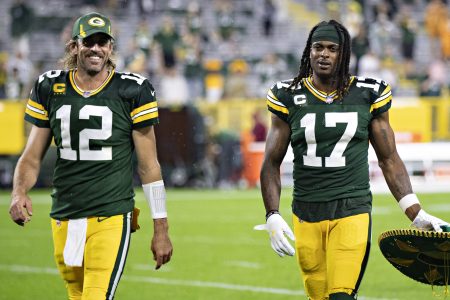 Sorry Packers Fans, Your Dream Duo Is No More and Aaron Rodgers Let It Happen

Carr, who has some leverage thanks to a no-trade clause in his contract and money on his deal becoming automatically becoming guaranteed on February 15 if he’s still on the Raiders’ roster, is a middle-of-the-road quarterback with a career record of 63-79 and zero wins in the playoffs. He’s not horrible, but he’s certainly not great and has not shown he has what it takes to lead a team to a Super Bowl. Adams played with a Super Bowl-caliber quarterback in Green Bay (Aaron Rodgers) and he should want to again. He already got paid — now it’s time to win. It won’t happen with Carr, but it may with Brady, Jimmy G or even via a reunion with Rodgers.

Whatever the future holds for Adams and the rest of the Raiders, it likely doesn’t include Stidham, who has thrown for 72 yards and no touchdowns in three appearances this season, as the team’s long-term quarterback.