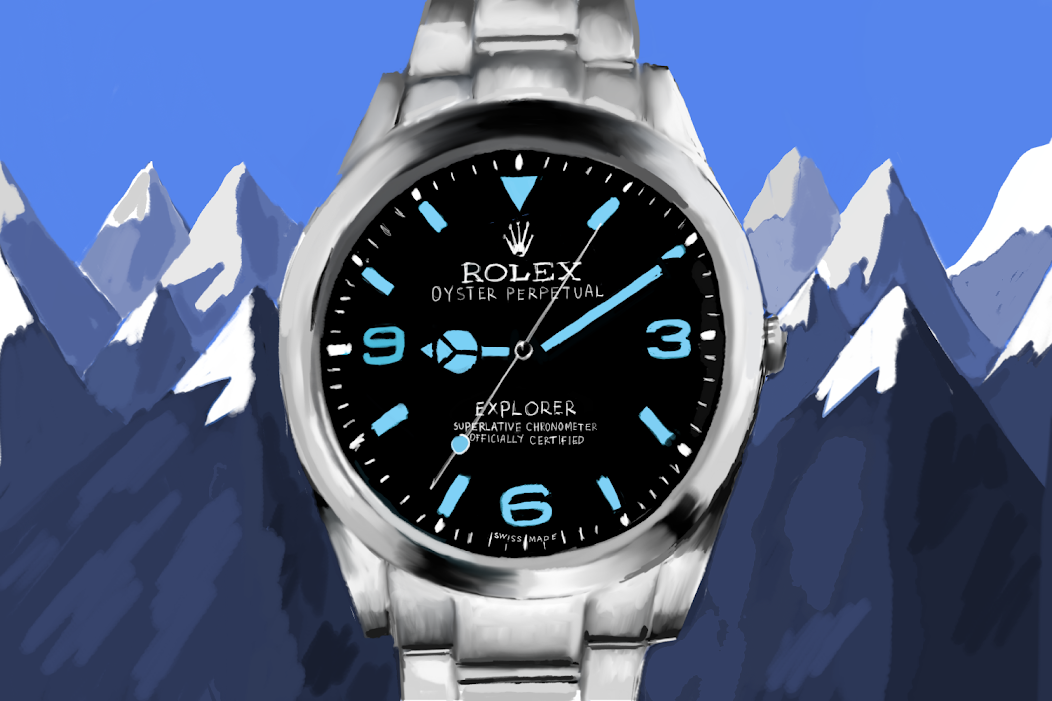 The Rolex Explorer (Wes Robinson for InsideHook)
By Nicholas Mancusi / September 30, 2019 6:00 am

This time around, novelist Nicholas Mancusi, whose debut, A Philosophy of Ruin, is one of our favorite books of 2019, writes about why he’s always going to look longingly at a certain watch that, at under $7,000, is actually somewhat affordable … for a Rolex. Still, he’ll probably never be able to pull the trigger.

To admit that you lust after an expensive watch is to admit that you are, essentially, a suggestible fool. After all, the multi-billion dollar watch industry is based on a kind of delusion. If one wanted a durable watch that will last for decades, tell the time with near-perfect accuracy, and offer other features such as a stopwatch and alarm, it can be had for about 5 to 50 bucks. (Might I recommend the Casio Gshock DW5600?) But the industry persists because it was able to deftly transition from making tools to making objects of pure fantasy. And for me, that fantastical object is the Rolex Explorer.

The Rolex Explorer — sometimes referred to as the “Explorer 1” — has been produced by the iconic Swiss watchmaker, in various iterations, since 1953.  It currently has a retail price of a tidy $6,550, which actually places it at the lower end of Rolex’s line. (Other Rolex models can fetch as much as $40,000 or more. Most laypersons, unafflicted with the curse of watch enthusiasm, would never guess just how expensive an “expensive watch” can be.) Unlike many of the shiny dinner plates currently in vogue, its specially developed “oystersteel” case is sized sensibly at 39mm across (up from 36 in the original model). It has no complications at all, unless you consider a second hand a complication, and a fixed bezel, rather than a rotating timing bezel. It’s powered by a calibre 3132 automatic movement accurate within two seconds per day. It’s got everything you need, nothing you don’t, and it just looks great.

For my money, it is the best watch that Rolex offers. It’s more understated and somehow more striking than Rolex’s most popular and iconic model, the Submariner, which I’ve never seen on a mariner but frequently see on midtown guys in light blue button-downs. Compared to the dressier models, the Explorer is a “sports watch,” which means it’s for sportsmen, such as myself (I don’t wear a suit but I occasionally go for jogs).

With the advent of quartz technology beginning in ’70s and ’80s, the challenges of watchmaking had been essentially solved forever. Instead of relying on a complicated, tiny, purely mechanical movement powered by a wound spring, all that a watch needed to tell the time was a small battery sending a charge over flake of quartz, at a fraction of the price, and with far greater accuracy. In order to survive, high-end watch companies realized that if they could no longer sell you an efficient tool, they could still sell you a story. And as a fiction writer, I’m prone to selling myself stories as well.

Think of all the exploring I would do with my Explorer on my wrist. Oh, such explorations I would have! I could explore, for instance, a new bar near my Brooklyn apartment. Or perhaps I’d explore a slightly different subway route to my office. I’d be like the men in the mountaineering-themed magazine ads traditionally used to market the Explorer, summiting the Matterhorn, beating sherpas up Everest. The Edmund Hillary of Crown Heights, the Ernest Shackleton of the Staten Island Ferry. I would never know what adventures awaited me; such is the life of the explorer. One thing, however, is guaranteed: wherever I was, I could cast my steely gaze down at my wrist and determine the time, with only slightly less accuracy than my phone.

The deeper fantasy, though, underneath all the daydreams about the manly adventures that would never be possible with a less expensive time piece, is that if I had an Explorer, then that would mean that I was the kind of man who could spend $6,550 on a frivolous bauble, an act so foolish that it’s essentially immoral. The kind of man who didn’t waste time considering the amount of real good that could be done with that money, the wiser purchases, the mutual fund, the people who could be made happy, the gifts he could give, the lives he could change, or of the degradations on the planet that this exact desire for conspicuous consumption has wrought. The kind of man who could admit to himself that he was at base not that great of a guy, little more than a captive to his desires, and that if he wanted the shiny thing, then he could have it.

Even if I ever have that money sitting around, I’m not sure that I could do it. Currently I have on my wrist another “iconic” timepiece, the Seiko SKX007, a dive watch that I got for $187. It’s rated to a depth of 200 meters. If I wanted, I could learn to scuba dive, and take it with me diving for treasure off the coast of Coney Island. So far, I’ve only gone in a few feet over my head.