The Luxury Watch Game Isn’t Owned by the Swiss Anymore

Forget Basel, these are from ... Sedona?

Few industries are as insular and incestuous as elite watchmaking.

None of this — neither the strictures of working in a calcified, you’d-think-prime-for-disruption industry or the cultural baggage of an American designer in a Swiss-made world — has kept Geoffrey Roth from his intended profession: crafting idiosyncratic watches close to home with world-class materials.

For over two decades, Roth represented jewelry designers at his gallery in Sedona, Arizona, when he was struck by the watch bug: After years traveling to the European Clock, Watch and Jewelry Fair in Basel, the man decided he would produce his own timepieces.

The design came easily; the parts, less so. Orders for parts went unfulfilled — and so Roth brought that engineering home, spurring local makers to fabricate and produce necessary elements. Roth himself machined the cases, crowns and dials in his own studio. Swiss movements were finished, assembled and compeleted here in the States.

The result? A ticker on par with the quality of a Swiss luxury watch, yet wholly American. A quirky, singular take on the classic men’s watch — an all-too-unlikely example of how watchmaking can be shaped by an artist’s eye.

To check out Roth’s full collection of tickers, head on over to his website and have an ogle. 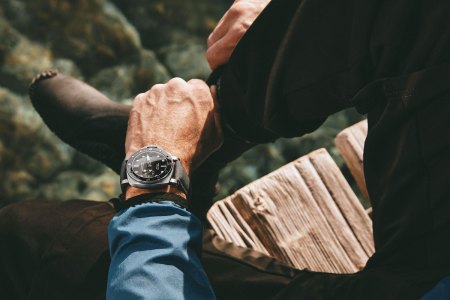