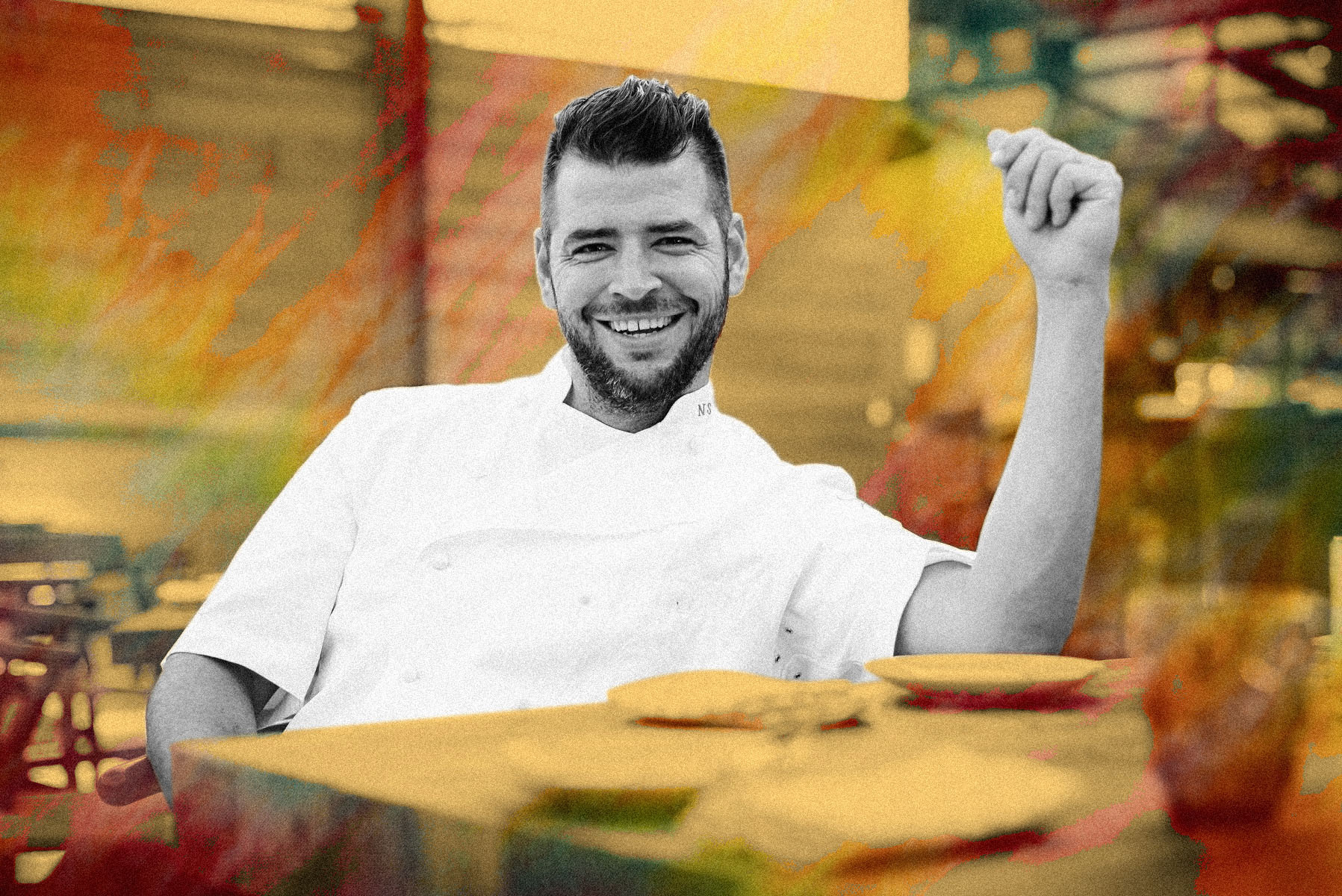 In honor of all of the restaurants we dearly miss and can’t wait to get back to, we’re asking some of the country’s most decorated chefs to tell us about the meals that will be at the top of their list when Stay at Home orders finally lift. This is First Meal Back.

Nicholas Stefanelli had his eye on a career in the fashion industry until he took a trip to Italy and ate his way through Rome, Florence, Assisi and Venice. From that point on, Stefanelli knew he wanted a culinary career on his plate, and attended Maryland’s L’Academie de Cuisine to make it happen.

Following stints in world-class kitchens (including French Laundry), Stefanelli opened his own place in Washington, D.C., in 2015. Masseria earned a Michelin star in the city’s first ever guide the following year.

Masseria, as well as Stefanelli’s other restaurant, Officina, has remained open during the pandemic, serving up Michelin-starred food via delivery. As part of our series First Meal Back, we chatted with Stefanelli (remotely) to find out what he’s been up to during the lockdown and where he’s hoping to eat once restrictions are lifted.

InsideHook: Where are you most looking forward to going to get a meal after the quarantine?

Nicholas Stefanelli: The ability just to go back out and sit down in a restaurant is going to be a beautiful experience. That whole thing is going to be great. Once everything gets taken away, you miss everything that you’ve been so accustomed to for so many years. Hopefully everybody makes it through it and has the ability to go sit down at a favorite neighborhood place and have somebody to take care of them. You miss hospitality when you can’t have it. I think it’s going to be a really important thing when we open back up.

Is there anyone you’re particularly looking forward to eating with?

It’s going to be great to have the ability to catch up with old friends. There were so many plans that were floating around before everything got canceled. We can catch back up and pick back up where everybody left off, celebrate birthdays that we missed.

Is there anywhere else you’re really looking forward to going after everything opens back up?

There are so many restaurants that just recently opened in the city that we haven’t gotten a chance to experience. It’s really tough to pinpoint one. I’ll be making even more of an effort to go out and eat when I have the opportunity to. You just take things for granted when you’re always working. I definitely want to go out and see some friends and see what everybody’s doing once we get through this. Just being able to eat in a restaurant again will be great.

What has the transition to doing delivery been like?

When all this started, it was like everything was ripped out from underneath us. We were just trying to figure out what was going to happen. How do we protect our employees and keep everybody safe? We took it day-by-day and now we have 32 people back at full-time employment between the two restaurants. We just really bootstrapped it and went with the wind and saw where it took us. It was a rough process at first learning how to deal with all of the different logistics. One of the good things about the hospitality industry is everybody knows how to really make things happen. A lot of people have responded really creatively and it’s been great to see across the country what people have done.

What’s been the most difficult thing about doing delivery?

The hardest thing we’ve been dealing with has been the travel aspect of it. We’re trying to make food that’s going to live up to what we do, but is also able to travel. There are some things that you just can’t have because they’re going to fall apart. For something that’s supposed to be executed and enjoyed right there on a plate, it’s not really going to have the same effect after a 45-minute delivery. Foie gras is one of those items we can’t cook right now because it’s not going to travel as well. We also had some logistical problems early on with supply, but a lot of that stuff worked itself out. We do a lot of impromptu cooking at Masseria and having that kind of flow to creatively let a night take its course and drive it is what I miss the most.

Have you had to alter your menu at all?

There’s definitely been a learning curve, but we’re still trying to keep the quality and the standards that we cook with when we’re in the restaurant. There have been a lot more salads, which is one thing that we really hadn’t done a ton of. All the braises translate really well to deliver because they hold up and can be reheated easily. It’s when we’re cooking stuff to temperature, like when we do duck, that is kind of scary part. We didn’t do Sunday, but now we open for delivery and do a ragu similar to what my father or aunts would make at the house. It’s all the braised meats and tomato sauce with pasta. That travels really well. Everyone’s cars are filled with this great perfume.

Overall, how has the pivot to delivery been for business?

We still have a limitation on what we can do because there’s only so much time in the day and it’s not like we have 500 people that can drive all over the city. We max out every night, which is great. It’s like we’re taking reservations, but we’re just doing it on deliveries as opposed to doing it in our dining room. We’ve had great community support, which has been awesome. People have been so happy to see us come to their door. It’s the silver lining to what’s been going on. As you’re going on deliveries to people’s houses, you see signs of gratitude in the doors and inspirational quotes painted on windows. It’s been great seeing how everybody’s just trying to get through it all together and move forward.

How do you think the restaurant industry is going to be changed after this?

I think some people that haven’t done it before are going to be looking at carryout and delivery as a viable option and I think it’s going to be interesting to see what happens with table spacing. It’s really hard to tell because we’ve spun our heads over this for the past 10 weeks trying to figure out how to adjust and then something changes. I think people are going to value just having the ability to walk out of the house and go to their favorite little corner place. So we’ll see where it goes. It’s hard trying to figure it out when you have no answers. I know we’ll all be able to figure out a way to get through this and get to the other side.

The star of "The Alienist: Angel of Darkness" is took a little time off from playing nazis and comic book villains