Bored of Modern Cars? Try One Without a Windshield.

From Aston Martin to Polaris, open-cockpit speedsters are having a moment 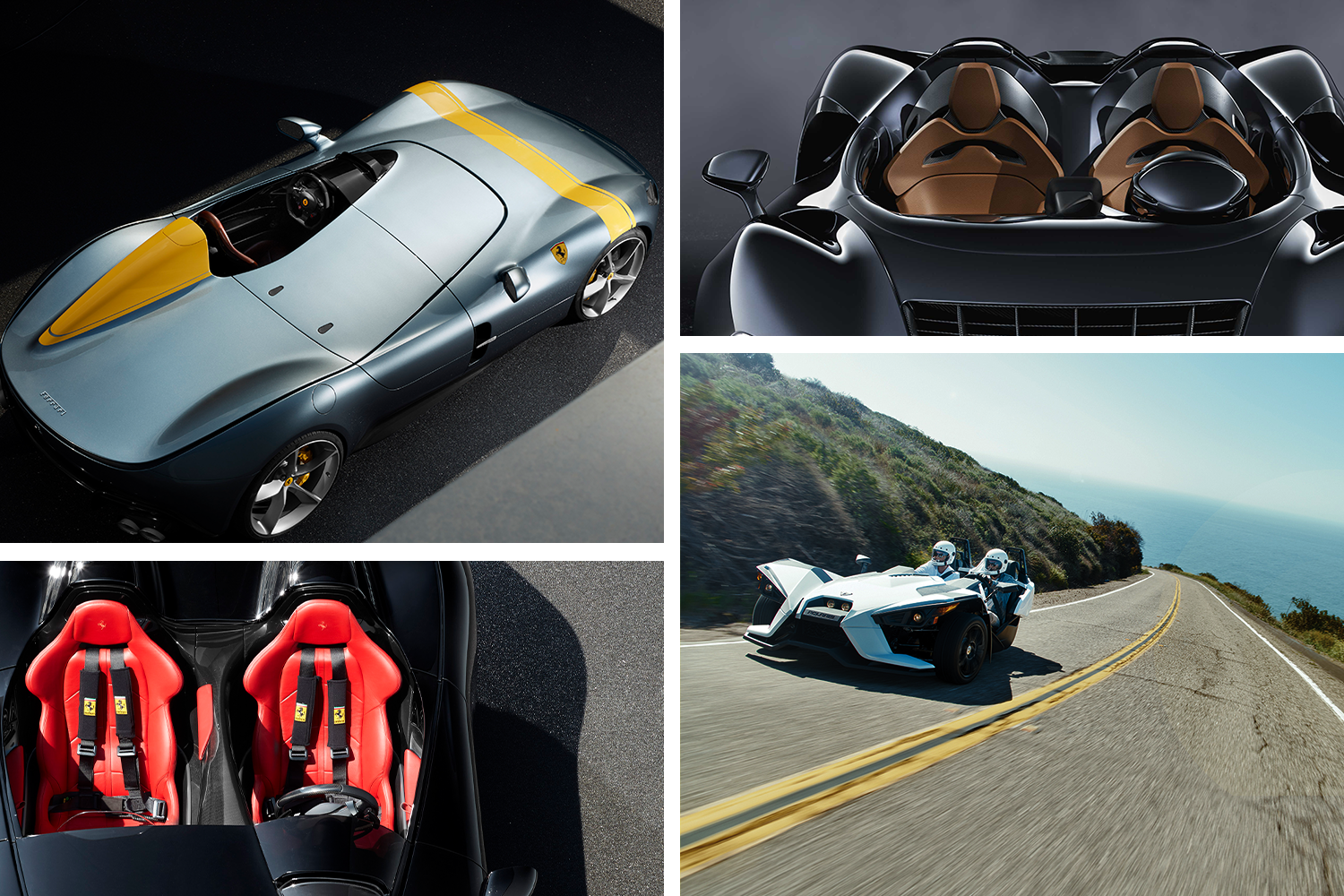 The one motoring image from 2019 I can’t get out of my head is octogenarian Tim Slessor of The First Overland shaking his fist at heated seats while double-clutching a Series I Land Rover. It’s as close to the Old Man Yells at Cloud meme as I’ve seen in real life (well, a video of real life), but it’s also indicative of a larger emotional problem within the modern auto industry, one that transcends generations.

As cars become more like smartphones, what happens when we burn out on tech and simply want the thrill of driving a machine as fast as the law will allow? Where are drivers to turn when they would exchange all the modern conveniences — heated seats and steering wheels, Apple CarPlay and outside-noise reduction — for a visceral pedal-to-the-metal experience?

The obvious answer would be to simply buy an older car. But for people who still prefer modern safety and handling technology, the industry has another answer: buy one without a windshield.

As inconvenient it may seem, windshield-less cars are having a moment. On Wednesday, Aston Martin announced a new limited-edition model, the V12 Speedster, which will have an “open cockpit.” Last November, McLaren revealed the (also limited edition) Elva, which swaps out the windshield for an “Active Air Management System.” And a year earlier, Ferrari unveiled the Monza SP1 and SP2, which they described as “en plein air sports cars.”

But the fun isn’t limited to the uber-rich. The three-wheeled Polaris Slingshot has been steadily gaining a dedicated fanbase since its launch in 2015. Its most affordable model, the Slingshot S, comes windshield-free (not to mention door-free). And this month, they’re releasing a hotly anticipated redesign. (Are we finally getting an automatic transmission?!)

For those who have never driven one of these, you might have a few practical questions. First and foremost, do you have to wear a helmet? Legally, it depends on what state you’re driving in. But from where we’re sitting, yes, definitely wear a helmet. When I took a Slingshot for a test drive this summer, one that sported a semblance of a windshield, I wore a full-face helmet — high-speed gravel exfoliation is not on my grooming bucket list.

That necessity aside, these vehicles are designed to accommodate the variables that come with being open to the elements. The Slingshot’s seating area is fully waterproof. Both Ferraris have a patented Virtual Wind Shield which essentially deflects the oncoming air around the driver, which is the same idea behind the aforementioned Active Air Management System on the McLaren. Both automakers describe their technology as creating a “bubble” around the driver, while still offering the exhilaration of an open cockpit.

Is all this a little bit ridiculous? Well, any normal person will certainly think so when it comes to the McLaren’s $1.69M price tag, as will any windshield-less driver when they decide to take a helmet-less drive around the neighborhood and get their first bug up their nose. But humans already do ridiculous things to tap back into a world before modern convenience, like locking phones in pouches at concerts and paying extra for off-the-grid vacations.

Spending your weekends joyriding with a helmet in an eccentric sports car isn’t any more ridiculous. Even people who have no interest in this trend should be in favor of them, because once people feel how fast 75 MPH is without a windshield, there’s no way they’re going to test their car’s chops on public roads.

In fact, if it would stop all peabrained Ferrari owners who think they have a right to hit 100 MPH because Ferraris go fast, maybe we should mandate all sports cars be made without windshields.