How to Car Camp in a Porsche, According to a Guy Who Does

This is not Photoshopped. This is Brock Keen's very real car-camping Porsche.
@Brockkeen/@bhaleyimage
By Alex Lauer @alexlauer 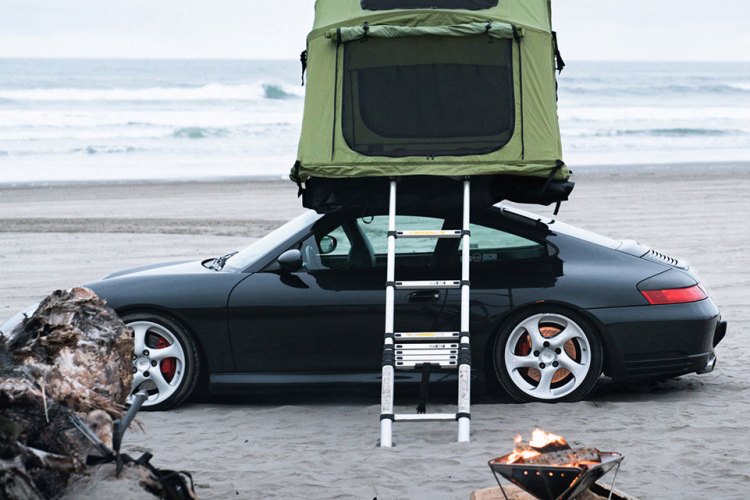 Those are the most common reactions on Brock Keen’s Instagram account. And for once in our lives, we understand the trolls, because he has achieved something that — according to all the laws of man and machine — shouldn’t be possible:

We first came across Keen’s unbelievable Instagram @996roadtrip during last month’s Overland Expo West and immediately looked up everything we could find about the build, eventually getting in touch with the man himself. After hearing from him and watching every single one of his videos, we determined that not only is a camp-friendly Porsche believable, it’s 100% replicable.

To help you convert your own Porsche from a sanitized track racer into a wilderness-conquering explorer, we asked Keen to share his rooftop tent setup, as well as the story of why he decided to go where no Porsche owner has gone before.

Haven’t picked up a 911 yet? No problem. He also shared his entire ultralight backpacking gear list, as well as a tip on how he picked up his 996 for the price of a Honda Accord.

“My Porsche is a 2004 911 C4S, which means it’s the all-wheel drive sport version of the 911. While my wife and I were shopping for a 911, initially we weren’t really looking for a water-cooled one, let alone one from the 996 generation, but this one basically fell in our lap and the value for the dollar couldn’t be passed up. It had been sitting in the warehouse of a local Mercedes dealer with a flat tire, dead battery and plenty of dust. They more or less just wanted it gone since it wasn’t the marque they sold much of. I won’t give away the exact price but I will say I could have bought a decently equipped Honda Accord or this — so the choice wasn’t a difficult one.”

“As much as I would like to say it was a well-planned decision it really wasn’t. The rooftop tent setup I have came about thanks to an impulse purchase at REI. My wife and I were at our local REI picking up some gear for a backpacking trip we had coming up and I spotted this Yakima Racks SkyRise RTT in the corner. It was already put together and it was something I had always wanted, so after a little convincing I got my wife on board and we bought it. Initially we were going to put it on our Range Rover Classic, but I learned really quick that I would need to buy some extra mounting hardware before it would work. That’s when the Porsche came into play.”

On the relative ease of securing a tent to a Porsche, and getting officially certified …

“The Porsche roof rack I already had on the car just happened to have the exact type of cross bars that would work with the mounts on the tent base. I hustled home, hopped in the Porsche and went back to pick up the tent. It didn’t take long for me to realize this could be a pretty amazing car-camping setup. I snapped a couple photos and shared them to my Instagram account. It wasn’t long after that we took our first camping trip in it. I took some more photos, posted them to Instagram and this time it got the attention of the people at Yakima racks.” [Ed. note: On Yakima’s website, the brand states: ““As a general rule, SUV and trucks can be good candidates for a rooftop tent, while cars, sedans and hatchbacks are usually not.”]

“When they found out I lived in the same town as their headquarters they asked if I would be willing to swing by their offices and let them run some tests on my car to make sure it was safe. Needless to say they were impressed by the engineering of the rack and roof structure, and my 911 became the first car specifically certified for a rooftop tent.”

On how, exactly, the tent holds him, his wife and their goldendoodle …

“For those wanting the details, the roof rack is rated at 165 lbs. dynamic weight (while the car is in motion) and the tent weighs in at 115 lbs.. This size of the SkyRise tent is rated to hold up to 600 lbs., so it easily sleeps me, my wife and our 50-lb. goldendoodle Lucy. We road trip all over the West Coast. I’ve taken it down to Sonoma Raceway, Laguna Seca for Porsche’s Rennsport Reunion, we’ve been snow camping around Mount Hood, spent plenty of time on beaches up and down the Oregon and Washington coast and, of course, some nice established campgrounds.”

“For one, not sleeping on the ground means a lot less dirt and bugs in the tent. The tent also has a built-in mattress and we can leave all of our bedding in it when we fold it up. The tent also sets up and breaks down a whole lot easier than a ground tent. Setup takes about five minutes and breakdown happens in less than 10. Quality is high too, we’ve spent quite a few nights in it so far and we have yet to have a single serious issue.”

“I hope this setup inspires people to get out, take an adventure and spend some nights outside! Camping in general is a phenomenal way of hitting the reset button after a long work week and I think everyone should spend some nights under the stars and cook a meal over an open fire. That said, it doesn’t have to be complicated, in fact it’s better when it’s not. Car camping does have its perks since you can usually pack some of those creature comforts you’re used to at home, but really all you need to do is buy or borrow a tent, get a sleeping pad and a warm bag, then go spend a night in a campground.”

“If you’re a Porsche owner and have either a 996 or 997 generation 911 with a roof rack, the Yakima SkyRise line of tents is the way to go. They are certified for our vehicles and, with the exception of a little wind noise, they are a great addition to an already very fun car. Canyon carving by day and rooftop tent camping by night!”

On how to pack for car camping, whether or not you own a Porsche …

“As for the gear we use, it really depends on where we’re going and how many nights we plan on staying. One of the biggest questions we get is, ‘Where do you guys put all your gear?’ First off, let me say we’re into ultralight backpacking so we have a pretty solid idea of how to pack light but efficiently. That said, we also like to be comfortable and have some nice amenities when possible. Our full gear list looks like this:

Anything else you want to know? Follow Brock over at @996roadtrip on Instagram where he regularly answers questions from his followers.

Answers have been edited and condensed for length in parts.

Nota bene: If you buy through these links, InsideHook may earn a small share of the profits.

Bill Maher and Nikki Glaser Talked Cancel Culture and Comedy on This Week's "Real Time"
The 20 Best Airbnbs on Lake Michigan, The Third Coast of the United States
One Texas Distillery Is Singlehandedly Bringing a Storied Mexican Spirit to the US
How Did Chris Hemsworth Get So Big? Try Out His Exact Regimen.
Texas Governor Signs Law Requiring State's Pro Sports Teams To Play National Anthem
Is Aaron Rodgers’s Dad on an Anti-Packers Twitter Crusade?