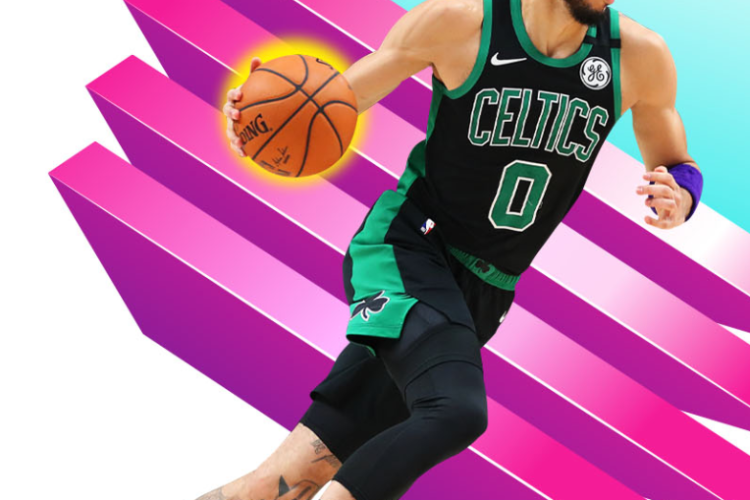 In Game 7 of the Eastern Conference finals in May 2018, first-year forward Jayson Tatum’s season culminated with a posterizing dunk over LeBron James in a game the Celtics ultimately lost 89-77 to the Cavaliers.

The dunk prompted oohs and ahhs from every corner of the commentariat, including King James himself, whose response to the dunk — as shared by NBA report Ben Rohrbach on Twitter — would become an endlessly recycled meme on the basketball internet.

Though Boston lost the series, Tatum’s throwdown was an enticing exclamation mark on a rookie campaign that saw the former Duke star average nearly 14 points, five rebounds and two assists per game with good shooting percentages while playing well on defense. Speaking with NBC Sports last March, Tatum — who has “a big-ass picture” of the SportsCenter-leading slam in his house — called the dunk on James “my most memorable play ever.”

“I probably watched it two million times,” he said. “I look at different things. The crowd’s reaction. Marcus Morris is right under the basket. Paul Pierce was on the baseline. He almost jumped onto the court. It’s the best thing I’ve ever done in basketball.”

But based on what Tatum has done in the NBA this month, that may no longer be true.

Now in his third season in the NBA, the third overall pick in the 2017 draft has been outplaying his draft position by leaps and bounds this February. Tatum is averaging 30.5 points, 7.5 rebounds, 3.0 assists, 1.1 steals and 1.2 blocks per game while shooting 51.4 percent from the field and 77.9 percent from the line in 36.5 minutes per game this month.

Incredibly, across 11 February contests, Tatum is connecting on half of his three-pointers and making 4.4 per game on average. The only other Celtic to average 30 points per game on 50 percent shooting in a month in the NBA’s three-point era? Larry Bird.

Those are superstar-caliber numbers and rank well above Tatum’s career averages of 17.0 points, 5.9 rebounds and 2.1 assists on 45.9 percent shooting from the field and 39.9 percent shooting from beyond the arc. Even better, the 21-year-old’s offensive evolution this month hasn’t come at the expense of his team, as the Celtics have won nine of their 11 February contests and 12 of their last 15 overall.

And those wins have not come against the dregs of the NBA, though there are plenty of dregs to be had. In February alone, the Celtics have beaten the 76ers, Magic, Thunder, Clippers, Trail Blazers and Jazz, all of whom are in, or vying for, playoff position.

In February, the Celtics have been one of the hottest teams in the NBA and Tatum, who played in his first All-Star game this month, has been their best player.

It has not gone unnoticed.

“Tatum has reached a new height, man,” his teammate Jaylen Brown told The Athletic this week. “Superstar level. The way he continues to improve is unreal. He’s a joy to watch.”

Speaking on the radio on 98.5 the Sports Hub on Thursday, Celtics president of basketball operations Danny Ainge said the team had seen signs of stardom from Tatum before, including in the playoffs during his rookie season, but this year he’s had more freedom to operate (perhaps because Kyrie Irving is out of the picture).

“I think Jayson is going to be really good,” Ainge, the man who drafted him, said. “I think every great player goes through hot streaks and bad streaks and I’m very excited seeing Jayson’s progress not just now, but all year long. Right now he’s in a streak where he’s making his three-point shots and creating his three-point shots, which is a whole other element. It’s not like he’s getting wide-open shots created by other people. It’s very impressive. And he’s doing a better job finishing at the rim.”

It isn’t just members of the Celtics who are appreciative of the way Tatum’s game is growing before our very eyes.

The guy Tatum dunked on to put himself on the map, James, got a firsthand look at how far the rising superstar has come since 2018 when the Celtics visited the Lakers to start the week. Following a nationally televised game the Celtics lost 114-112 that saw Tatum go for a career-best 41 points, James posted a series of photos of himself next to the young Celtic on Instagram.

“That boi to the left of me is an ABSOLUTE PROBLEM!!,” James captioned the photos.

If Tatum can continue to play at the level he has in February in March and beyond, he’s going to continue to be one for years to come.

Is Hot Tub Sex Ever Good?
Meet Balldo, The Device That Turns Your Testicles Into a Second Penis
Is Roger Federer Moonlighting as a Peloton Champion?
Bernie Sanders’ Inauguration Mittens Are Made From Recycled Wool by a Vermont Teacher Because of Course They Are
Meet the New-Age Strength-Training Tool That Firefighters Swear By
On the First “Real Time” of 2021, Bill Maher Explores the Trump Legacy

On the First “Real Time” of 2021, Bill Maher Explores the Trump Legacy
What About the Trans Athletes Who Compete — And Win — in Men’s Sports?
16 Albums to Make You Feel Warmer in the Dead of Winter