National Geographic's May issue focuses in on the popular national park

Yellowstone was the world’s first national park, and is home to the largest concentration of mammals in the lower 48 states. RealClearLife has selected its favorite images from this month’s issue of National Geographic, which focuses on all aspects of Yellowstone—from its geysers and extreme seasonal conditions to its ever-present, up-close-and-personal wildlife. Be sure to check our Nat Geo’s Yellowstone interactives, including this multimedia feature from a bear’s perspective. 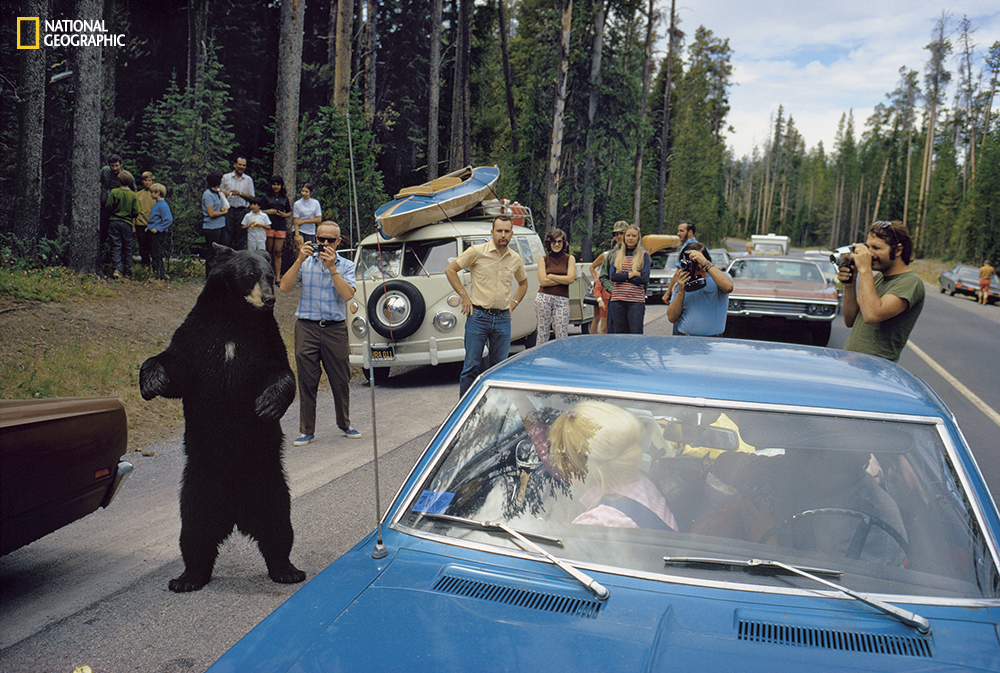 What wilderness means to people has steadily changed since Yellowstone was founded. The Park Service no longer tries to make tame spectacles of wild animals. But today, as in 1972, when this photo was taken, most visitors to the park never get far from the road; and a black bear is still a reason to pull over. (Jonathan Blair/National Geographic Creative)
JONATHAN BLAIR/National Geographic Creative 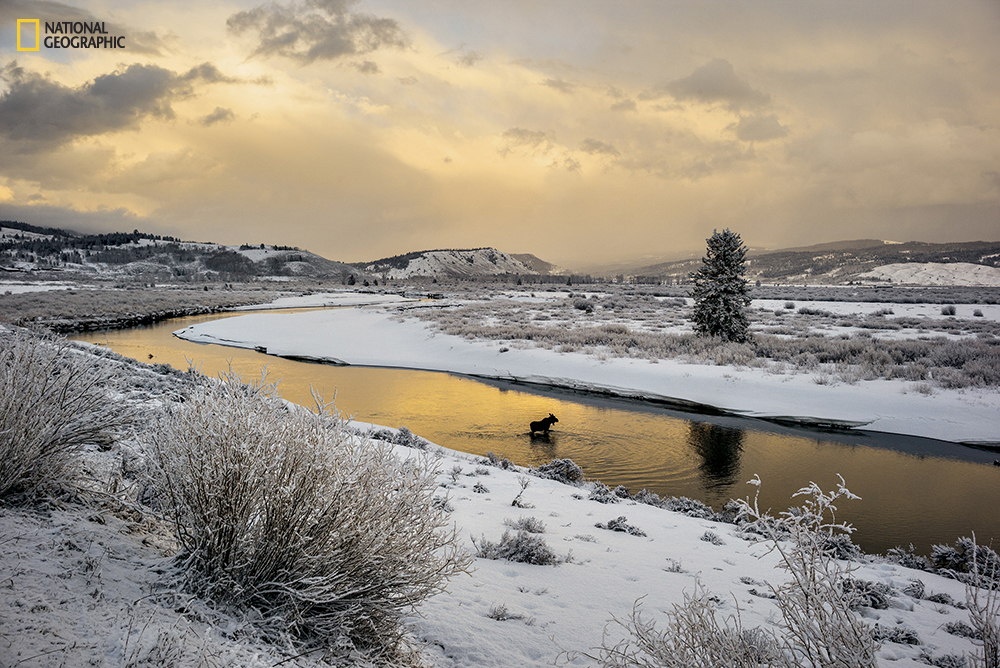 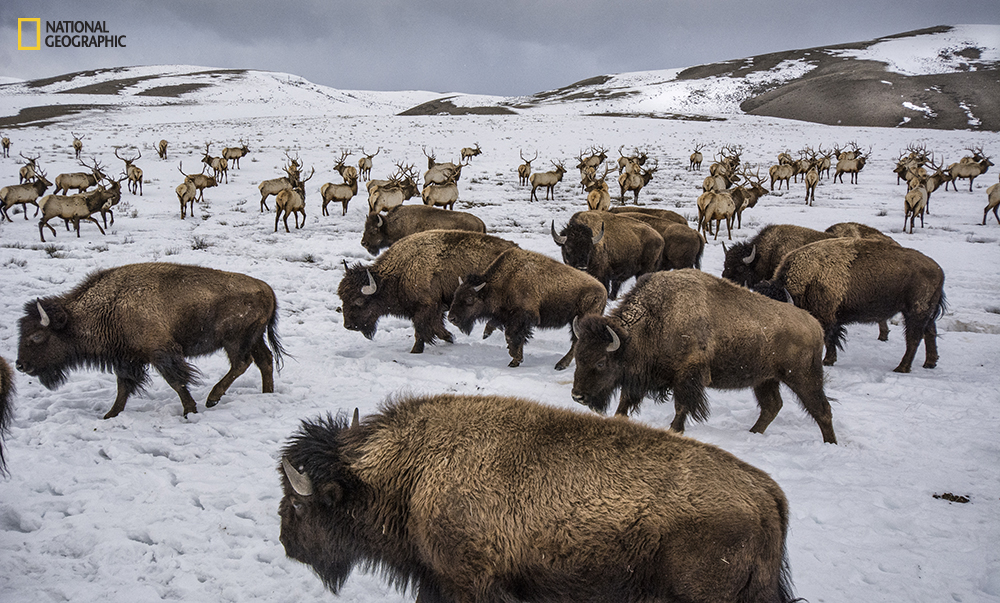 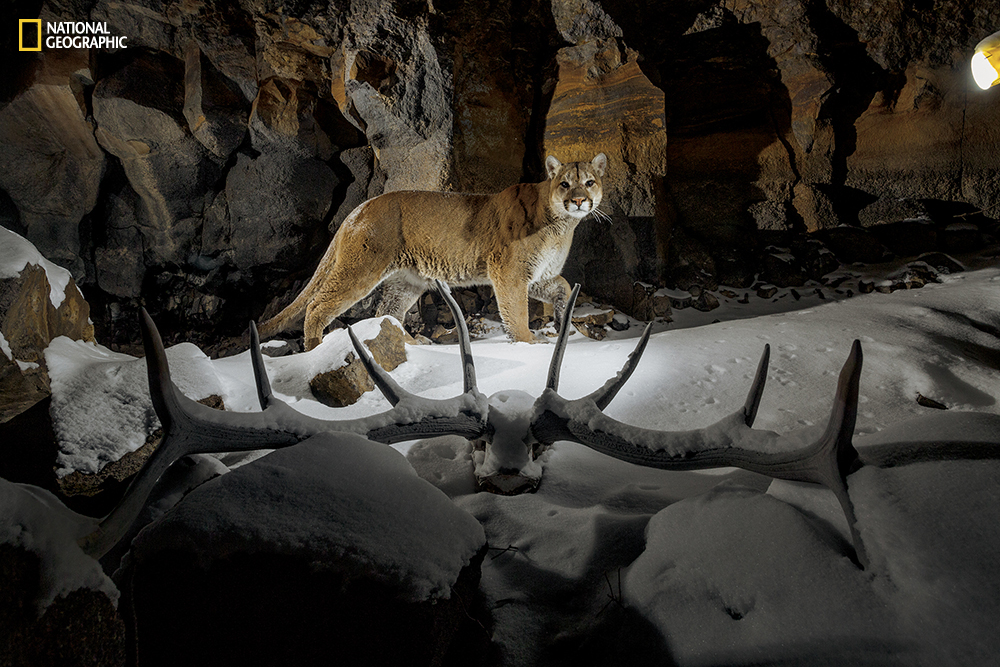 Notoriously elusive, cougars vary their range in response to their prey, mostly elk and deer. In winter they favor the shallow snow in the northern reaches of Yellowstone. This cougar was caught on the prowl by a camera trap set behind an elk rack on a cliff. (Drew Rush/National Geographic)
Drew Rush 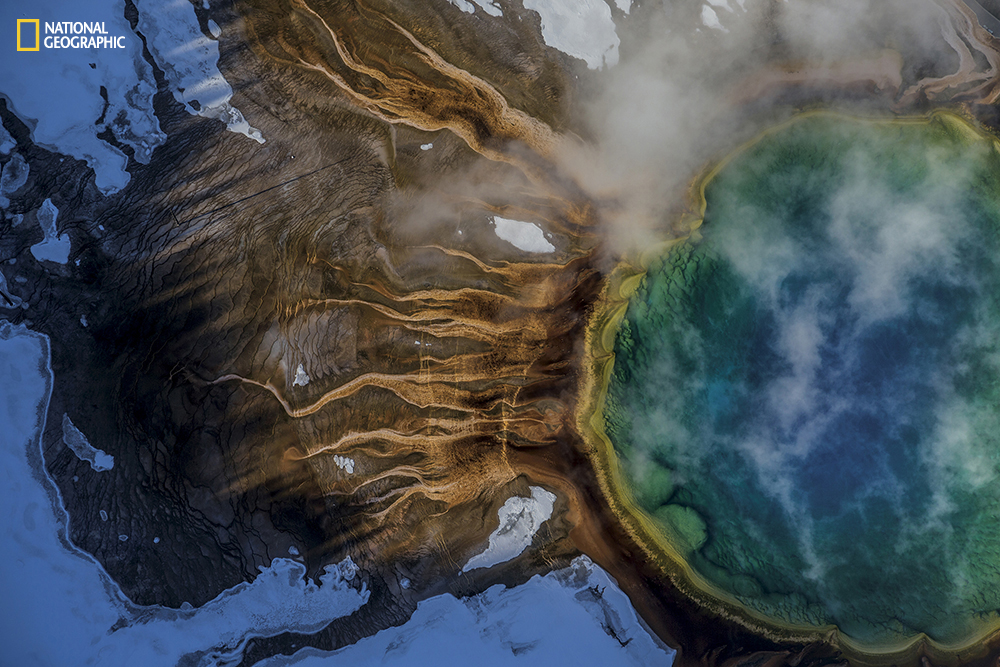 The colors of Grand Prismatic Spring come from thermophiles: microbes that thrive in scalding water. The green is chlorophyll they use to absorb sunlight. (Michael Nichols/National Geographic)
Michael Nichols 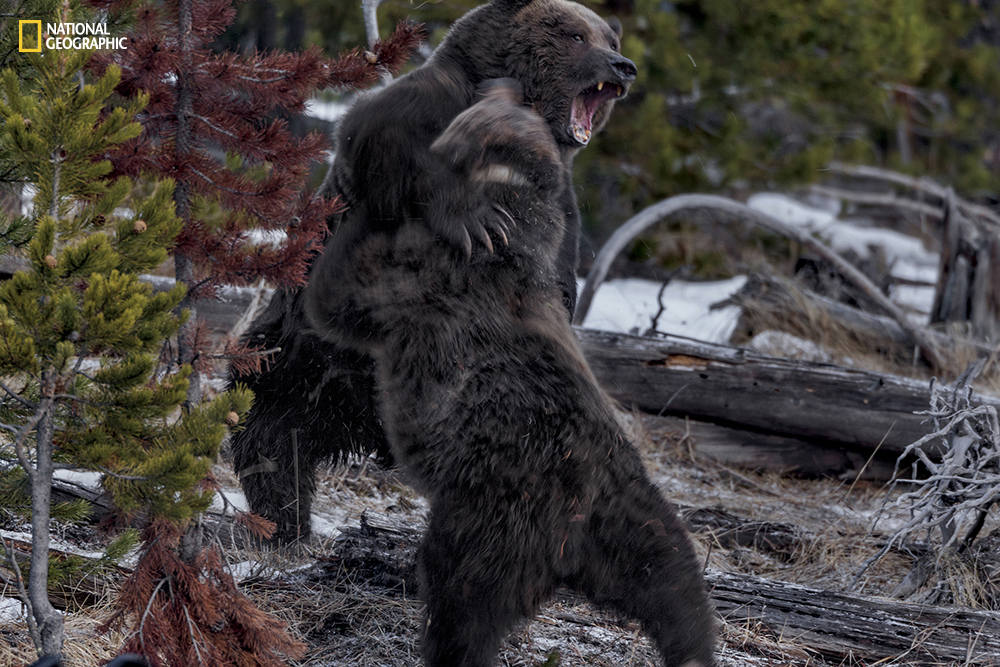 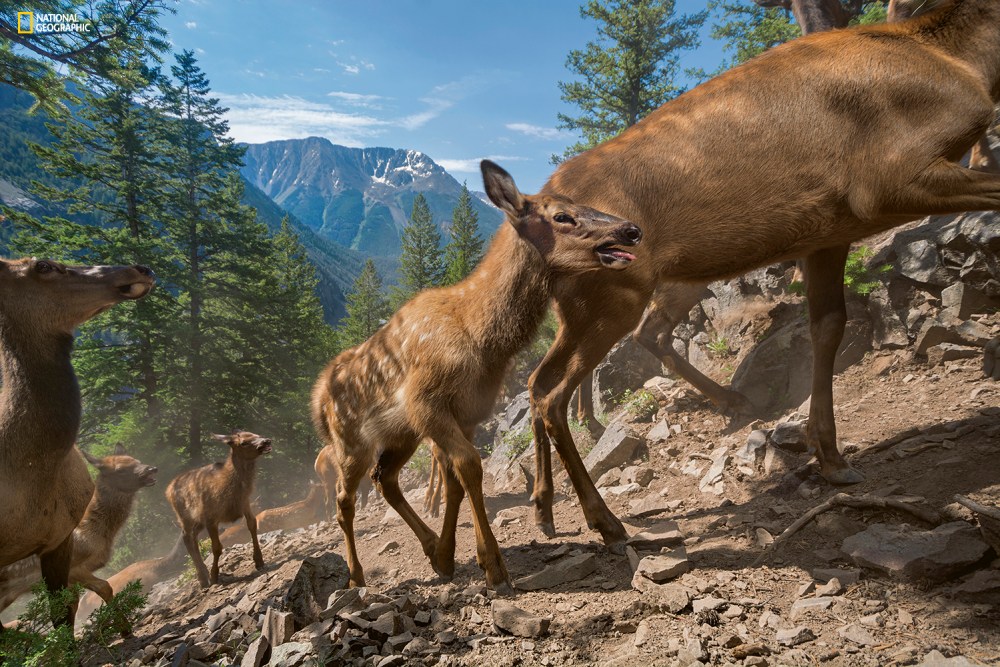 On their first migration to their summer range in southeastern Yellowstone, three-week-old calves of the Cody elk herd follow their mothers up a 4,600-foot slope. A few hours earlier they swam the swollen South Fork of the Shoshone River. (Joe Riis/National Geographic)
Joe Riis 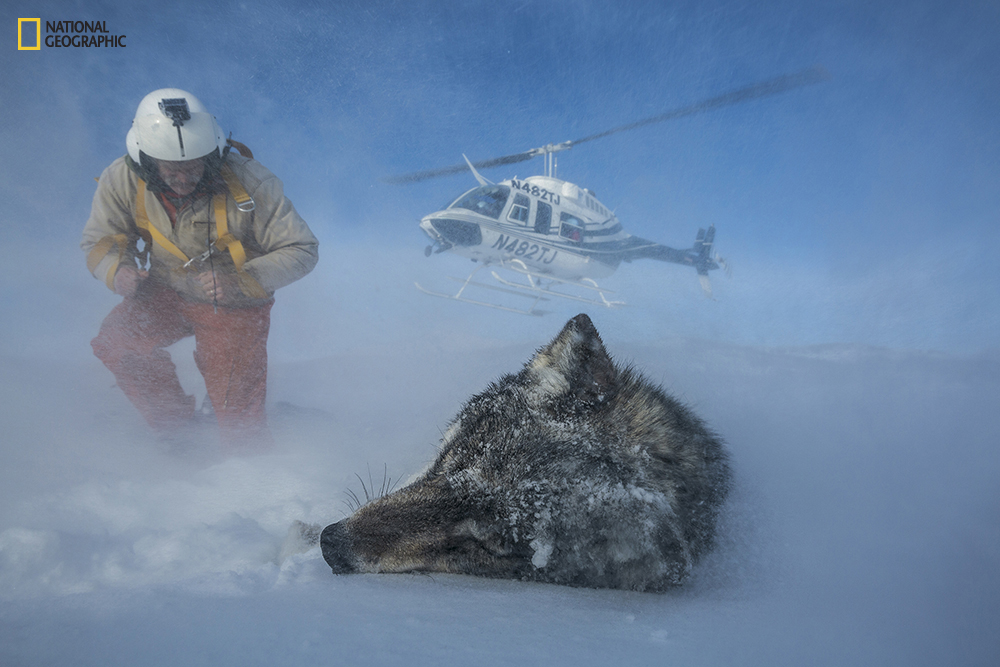 Park Service Biologist Doug Smith races toward a gray wolf that he shot from the air with a tranquilizer dart. Before it awakens, he’ll give it a quick physcial exam and fit it with a radio collar. Wolves are now thriving in Yellowstone, but researchers monitor them closely. (Michael Nichols/National Geographic)
David Guttenfelder 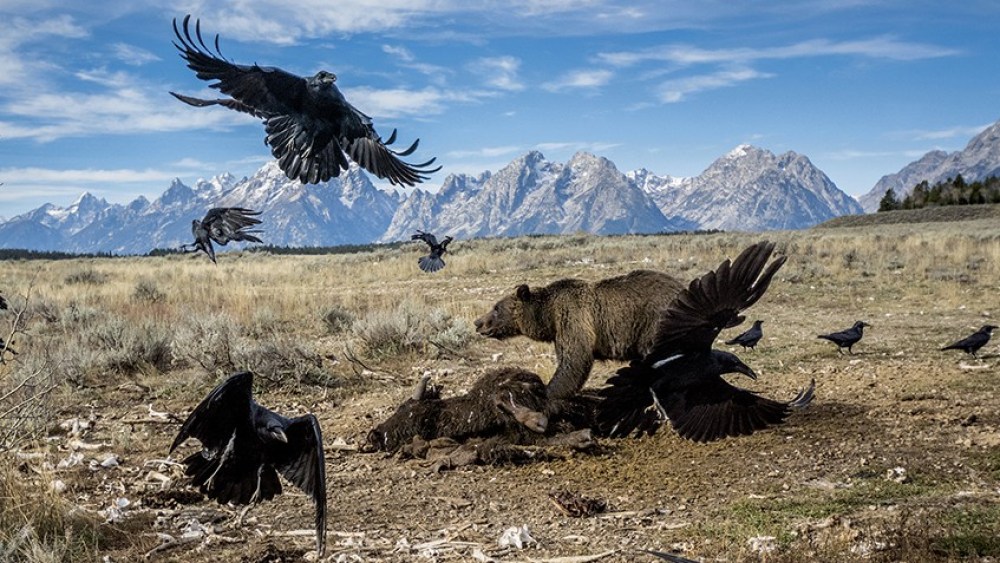 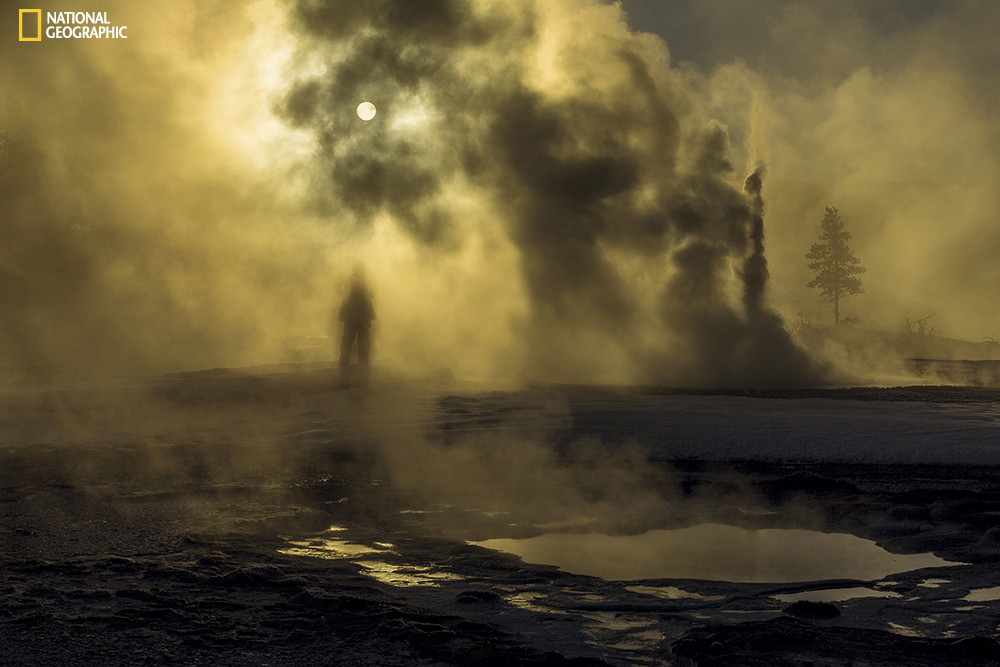 A lone woman vanishes into the steam clouds billowing from Tardy Geyser in Yellowstone’s Upper Geyser Basin. Geysers are formed when underground water meets superheated rock and blasts back out through a narrow hole. (Michael Nichols/National Geographic)
Michael Nichols