Can Toyota’s Hydrogen Ship Really Last for 6 Years at Sea?

Checking in on the world’s first hydrogen ship

Sign of the times? A brand that makes fossil-fuel-powered machines is now axles-deep in the success of at least one renewable-energy-powered ship.

Back in 2016, we reported on the impending launch of the French ship Energy Observer, which aimed to set itself apart from the crowd — i.e., the 96% of boats that use fossil fuels — by running on a combination of solar, wind and self-generated hydrogen power. Now in the second year of its globe-crossing voyage, Toyota Motor Europe has signed on as the official sponsor for the remainder of the mission.

That mission: to evangelize for the need to embrace and fund alternative energy sources, and specifically how they can be used to provide an earth-friendlier source of seamless power. The itinerary at launch spanned six years and 50 countries, and then had a list of 101 stopovers. As of press time, a counter on their homepage clocks in 7,656 nautical miles traveled, 12 countries visited and 23 stops completed. Today, July 6th, the ship is scheduled to port in Venice, where it will serve as a teaching tool for the public to see the possibilities of hydrogen power. 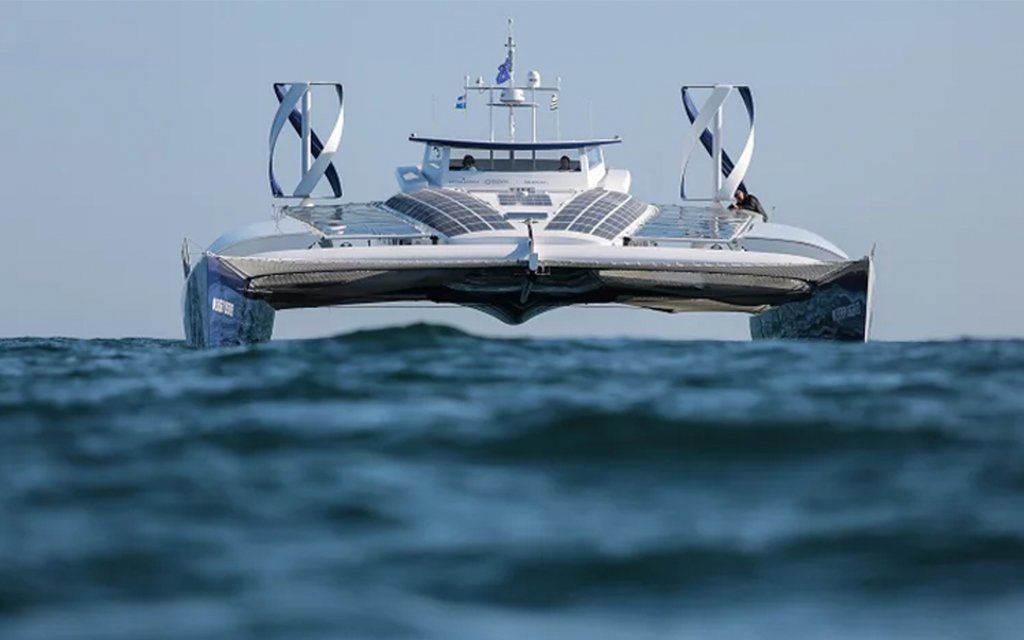 After this, it’s on to Northern Europe in 2019, with a goal to hit Tokyo in time for the 2020 Olympics. A documentary is being produced on the process, but if, like this writer, you’re a little rusty on the science of hydrogen power, here’s a brief rundown in the meantime:

Hydrogen is the most abundant element in the universe, but it doesn’t exist on earth as gas on its own. Rather, it’s always bonded to another element, which requires separation for storage and use. Hydrogen produced from seawater — like on the Energy Observer, for example — involves the water being split into hydrogen and oxygen through electrolysis, the former being compressed and stored in cell-type batteries to be used when sun and wind energy isn’t enough. Harnessing and storing the energy is just the one part; the cost is another. The Energy Observer project, by the numbers: the ship is reported to have cost about $4.3m in total, with another $4m or so per year in operating costs for each of its six years at sea.

So it ain’t cheap. But the lack of harmful emissions has kept interest in this alternative fuel source for decades; NASA has notably been using liquid hydrogen for its launches to space, and the only byproduct is pure water, which the crew drinks.