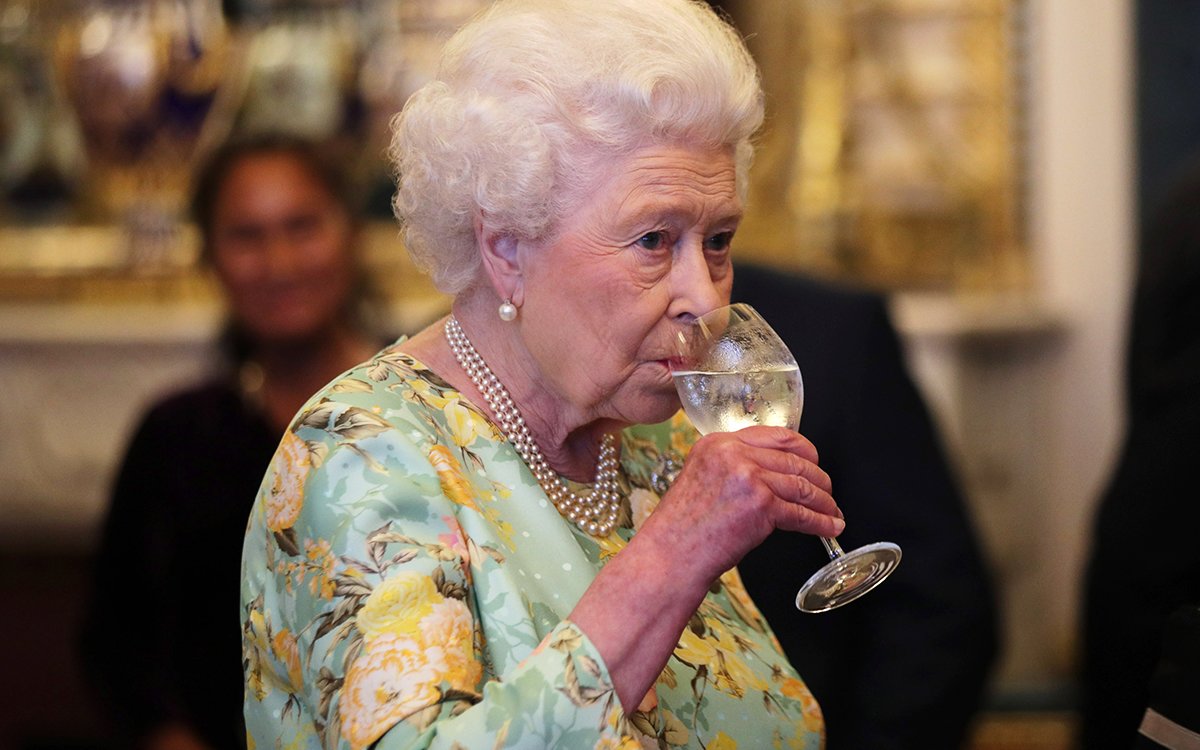 If Margaret Thatcher was The Iron Lady, Queen Elizabeth II is deserving of a similar cognomen: The Iron Liver.

According to Food & Wine, the Queen knocks back at least four adult beverages a day — and she gets started early.

1. Before lunch (presumably around 11:30, given what your correspondent knows about geriatric eating habits), the Queen takes “a gin and Dubonnet with a slice of lemon and a lot of ice.” Dubonnet, a fortified-wine aperitif, was famously the favored drink of Elizabeth I, the Queen’s mother. It boasts a 15% ABV. Combined with gin, that makes for a robust cocktail.

2. A glass of wine — and a piece of chocolate — with lunch, according to former Royal Chef Darren McGrady. “She loves it.”

3. BUT WAIT, THERE’S MORE. In the evening, the Queen takes a dry martini, which — like the Dubonnet cocktail — is really closer to two drinks than a single one.

4. And finally, a glass of Champagne before bed. Pretty sure we’ve seen a T-shirt with that inscription on Etsy.

Punch those particulars into a BAC calculator (assuming she weighs about a buck-ten and the duration of the undertaking is about eight hours), and what do you get? A BAC of between .15 and .2, which puts her firmly in last-lake-house-weekend-of-the-summer territory.

Is this true? Can this possibly be true?

The basis for the estimate is an article in The Independent from 2012 that cites the Queen’s cousin Margaret Rhodes as its source. Rhodes apparently said Her Majesty’s “alcohol intake never varies.” When asked to confirm the routine, though, McGrady doubted its veracity: “She’d be pickled if she drank that much.”

Then, pickling is a form of preservation. And at 91 and still riding horses, the Queen is nothing if not well-preserved.

To get one, Reid first needs a win this weekend against the Titans