10 May Airfares From NYC You Simply Cannot Beat

Looking to get out of town? You’re in luck: May brings with its some terrific shoulder-season fares, whether you’re looking to keep it in the country (just over $100 to Ft. Lauderdale) or really get out of town (how’s Iceland for $300 sound?). All fares double-checked for May flights and still available, at least at press time.

Roundtrip: $168 on JetBlue
Briefly: Both Frommer’s and Travel and Leisure ranked Bermuda among their best places to visit in 2017. Need more? Afar put the island on its “Where To Go in 2017” list and Lonely Planet did the same. Add InsideHook to that list of vouchers and get yourself to the islands, man.
Stay At: Freshly opened last year, The Loren At Pink Beach is an oasis of contemporary luxury with a little old-school island charm. Perched oceanside on a cliff, it’s a postcard in the making.
Stop By: Wander the unfinished church in St. George, get your ‘gram on at Horseshoe Bay Beach, hike the Railway Trail and grub down at fusion hotspot Mad Hatters. And golf. A lot.

Roundtrip: $247 on Volaris
Briefly: Edgy, creative and plenty of tacos al pastor. Is that Mexico City in a nutshell? Definitely not. But that’s enough reasons for you to go, stat.
Stay At: La Valise, with just three suites, located inside an early 20th-century French-inspired building. Don’t sleep on the city’s plethora of incredible Airbnb stays, either.
Stop By: Frida Kahlo Museum, Museo del Juguete Antiguo,  Casa Gilardi, Rosetta Restaurante and La Mercad Market.

Roundtrip: $260 on WOW Air
Briefly: Everyone you know has been there, but it’s still great — especially if you do it better by renting a 4×4 with a tow-along teardrop trailer.
Stay At: A Mink Camper if you wanna do Ring Road properly, but also the just-opened Retreat at the Blue Lagoon if you want to kill two birds with one stone.
Stop By: The Secret Lagoon, Thrinukagigur volcano, Fontana Natural Steam Bath and Apotek.

Roundtrip: $124 on United
Briefly: Like Miami, but not terrible. Fort Lauderdale has all the sunny Florida perks, but less of the cheese.
Stay At: The W Ft. Lauderdale just underwent a $55m renovation with the award-winning Meyer Davis Studio. You need not leave the hotel. The newly opened Sushi Bar, a concept from Chef Shuji Hiyakawa, has all the fishy fare your heart desires, there’s nightly music and entertainment, and the WET Deck pool view (see also: scene) cannot be beat.
Stop By: A dream by land and sea, check out the expansive Dezer Auto Museum and tackle some deep-sea fishing on one of the region’s many charters.

Roundtrip: $204 on Frontier
Briefly: Between recreational marijuana and the elephantine shadows of Mt. Rainier, Seattle’s natural bounty is everywhere. However, leave the umbrella at home and buy yourself a proper rain jacket, as the locals do.
Stay At: The Thompson Seattle, which is walking distance from the Seattle Art Museum and Pike Place Market. Pro tip: get a room with views of Puget Sound.
Stop By: Olympic Sculpture Park, the Amazon Spheres, Filson’s Seattle Flagship, Ebbets Field Flannels and JuneBaby, which is being billed by many as America’s next great Southern restaurant.

Roundtrip: $288 on JetBlue
Briefly: If you still haven’t lived out your yesteryear Cuban dreams, now is the time to stock up on cigars and nostalgic cab rides.
Stay At: Adults-only destination Melia Buenavista offers over-the-water cabanas and all the comforts of a top-notch boutique destination. But if you want to do Cuba like a local, we recommend going AirBnb, like this historic number here.
Stop By: Hook up with the best local guide service in the biz, ViaHero, and let them lead the way.

Roundtrip: $150 on JetBlue
Briefly: The epicenter of Southern charm, Charleston offers great food, architecture and a seemingly endless parade of bachelorette parties.
Stay At: The daring yet darling Restoration. There’s a vintage Mustang convertible at your disposal.
Stop By: Shuck oysters by day on Goat Island, take a romantic petty cab ride down the historic, mansion-lined Rainbow Row at sunset and don’t miss a meal at FIG, hands-down one of the best dinners we’ve had our whole damn life. 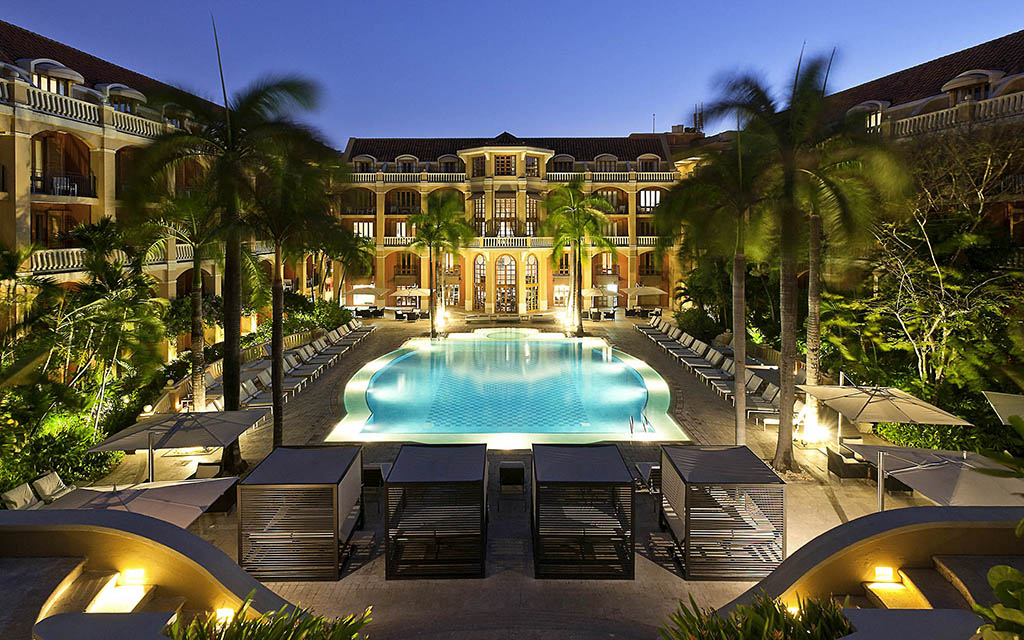 Roundtrip: $311 on Spirit Airlines
Briefly: Cartagena is quick on its way to becoming the Cancun of Colombia, but it’s not quite there yet. Get it while the gettin’ is still good.
Stay At: A converted convent that’s now a French-Caribbean haven, The Sofitel Legend.
Stop By: Take a boat over to Rosario Islands for the best beaches and stroll around Old Town for dancing. For eats and libations, don’t miss El Barón, La Cevichería, Quebracho and Alquímico.

Roundtrip: $180 on Spirit Airlines
Briefly: New Orleans turns 300 this year, making it the perfect time to go and discover (or remind yourself) why The Big Easy is a world-class city.
Stay At: Catahoula Hotel, located in a masterfully rehabbed 1845 Creole townhouse and a stone’s throw away from Jackson Square, in the heart of the French Quarter.
Stop By: Preservation Hall, Faulkner House Books, Compère Lapin and Turkey and the Wolf

Roundtrip: $180 on JetBlue
Briefly: The truth is the Caribbean is still suffering from Hurricane Irma and Maria, but tourism is one of the speediest, most steadfast paths to recovery
Stay At: The 12-room oceanfront hotel The Dreamcatcher, especially for the option to volunteer in recovery efforts, or the newly (and miraculously) opened Serefina Hotel.
Stop By: Luca, La Factoria, JungleBird

Review: The New Jack Daniel’s Release Comes With an Actual Warning
Is Kendall Roy Dead?
Italian Pot Roast Is the Bolognese Alternative You Need in Your Life
What I Wish I Knew Before I Bought a Chevy K5 Blazer
How a Nepali Climber Shattered the Record for Summiting the World’s 14 Tallest Mountains
Why Do I Feel So Weird About Dave Grohl, Who Isn’t Jewish, Doing Annual “Hanukkah Sessions”?

A New Standard for Sustainable Luxury Hotels Has Arrived
BMW Doesn't Care What You Think About Its Humongous Snout
The Latest Designation in Mental Health Conversations? "Adult Children."
Huckberry and Bring a Trailer Want to Gift You This Land Cruiser FJ60
Everything You Need to Know About Our Favorite Sexual Wellness Brand
Every Man in My Family Asked for These Socks for Christmas
Meet the Navy SEAL Who Ensures That “Call of Duty” Is True to the Battlefield
Why Sparkling Red Wine Should Be Your Drink of Choice This Holiday Season
Week 13's Top Storylines: Mike Zimmer, Big Ben and the Return of Minshew

Why Do I Feel So Weird About Dave Grohl, Who Isn’t Jewish, Doing Annual “Hanukkah Sessions”?
The 100+ Best Gifts for the Women in Your Life
The Cola-Flavored Beer From Goose Island Is Surprisingly Great
Scientists Record Footage of Massive, Mysterious Jellyfish
Neil Patrick Harris on the Art of Magical Holiday Gifting