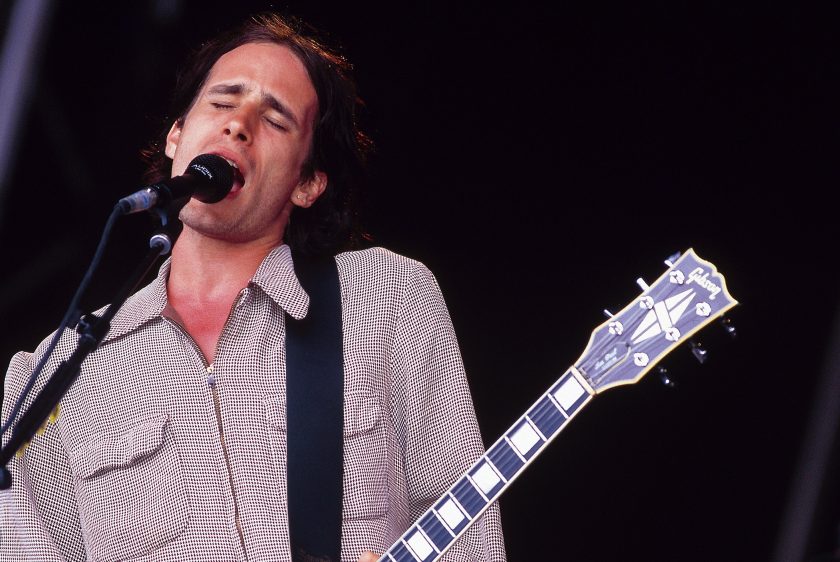 Jeff Buckley performing in the United Kingdom in 1995. (Mick Hutson/Redferns)

Good news for those of you who like music: Jeff Buckley’s enormous vinyl collection has been shared with the Internet, allowing users to browse through a digital recreation of his record shelves, preview tracks, and find each album on Spotify (or any other streaming service, really).

The son of folk singer Tim Buckley, Jeff was a talented singer/songwriter whose cover of Leonard Cohen’s “Hallelujah” and 1994 solo album, Grace, won him critical and industry acclaim. Both Jimmy Page and David Bowie hailed Grace as one of the best of the 1990s. Mainstream success was more elusive, however, and Buckley wouldn’t see it before accidentally drowning in 1997 during an impromptu swim in a Memphis river. (He was just 30.) Since his death, critics and musicians alike have recognized and embraced his brilliance.

In addition to being a talented artist, Buckley was a man of eclectic tastes. His recently released, exhaustively curated record collection covered nearly every genre of American popular music, and it would take months to go through the whole thing piece by piece.

But here are the highlights:

The Descendents, Milo Goes to College

Originally released in 1982, shortly before lead singer Milo Auckerman went to college (he now has a doctorate in molecular biology), Milo Goes to College is a classic punk rager from the fathers of modern pop-punk, and includes two of their best songs in “Suburban Home” and “Hope.”

The most infamous album by the politically incendiary punk band, Frankenchrist got them sued for “distributing harmful matter to minors” and became the catalyst for singer Jello Biafra’s standoff with the Parents Music Resource Center. It also has a lot of great songs, namely “Chicken Farm,” “M.T.V. − Get off the Air,” and “Jock-O-Rama.”

Iggy and the Stooges, Raw Power

Easily one of the wildest, rawest records of all time, Raw Power is Iggy and his band at their sweaty, swaggering best. “Your Pretty Face Is Going to Hell,” “Search and Destroy,” and “Shake Appeal” are all guaranteed to loosen something in even the most tightly wound individual.

One of the highlights of Buckley’s extensive jazz collection, Mingus Mingus Mingus is a rolling, crashing triumph of Mingus’ talents as a bassist and bandleader. In songs like “Theme for Lester Young” and “Hora Decubitis,” you’ll hear not just his hot, energetic takes on hard bop, but elements of free jazz and classical composition as well.

Written during Nick Cave’s struggle with heroin addiction, this is a desperate, gloomy record with several of Nick’s favorite songs, including “The Carny” and “Stranger Than Kindness.”

David Bowie, The Rise and Fall of Ziggy Stardust and the Spiders from Mars

The late David Bowie had a lot of great stage personas, but none were as wild or enduring as Ziggy Stardust. Consequently, the album released under this persona is arguably his best, with hits like “Hang On to Yourself,” “Suffragette City,” and “Moonage Daydream.”

Can’t have a record collection without KISS, right? Destroyer is essential for vinyl junkies, KISS fans, and anyone who likes rock ‘n roll, since it contains not only “Detroit Rock City,” but also “God of Thunder,” “Shout It Out Loud,” and “Do You Love Me.”

Jeff Buckley loved Queen, and how could he not? Queen combined theatrical bombast, impressive orchestration, and heavy rock better than any other band of their era. Listen to “Stone Cold Crazy,” “Killer Queen,” or “CCCC” and see for yourself.

Buckley was a big Zep fan, and their third album began their incorporation of more acoustic and folk elements into their music. It also has “Immigrant Song” and “Gallows Pole” on it, which automatically elevates it to one of their best efforts.

Take a look at Jeff Buckley’s website to rifle through his full record collection.