The HBO classic gets one more round as a movie after 13 years. But is it worth resurrecting? 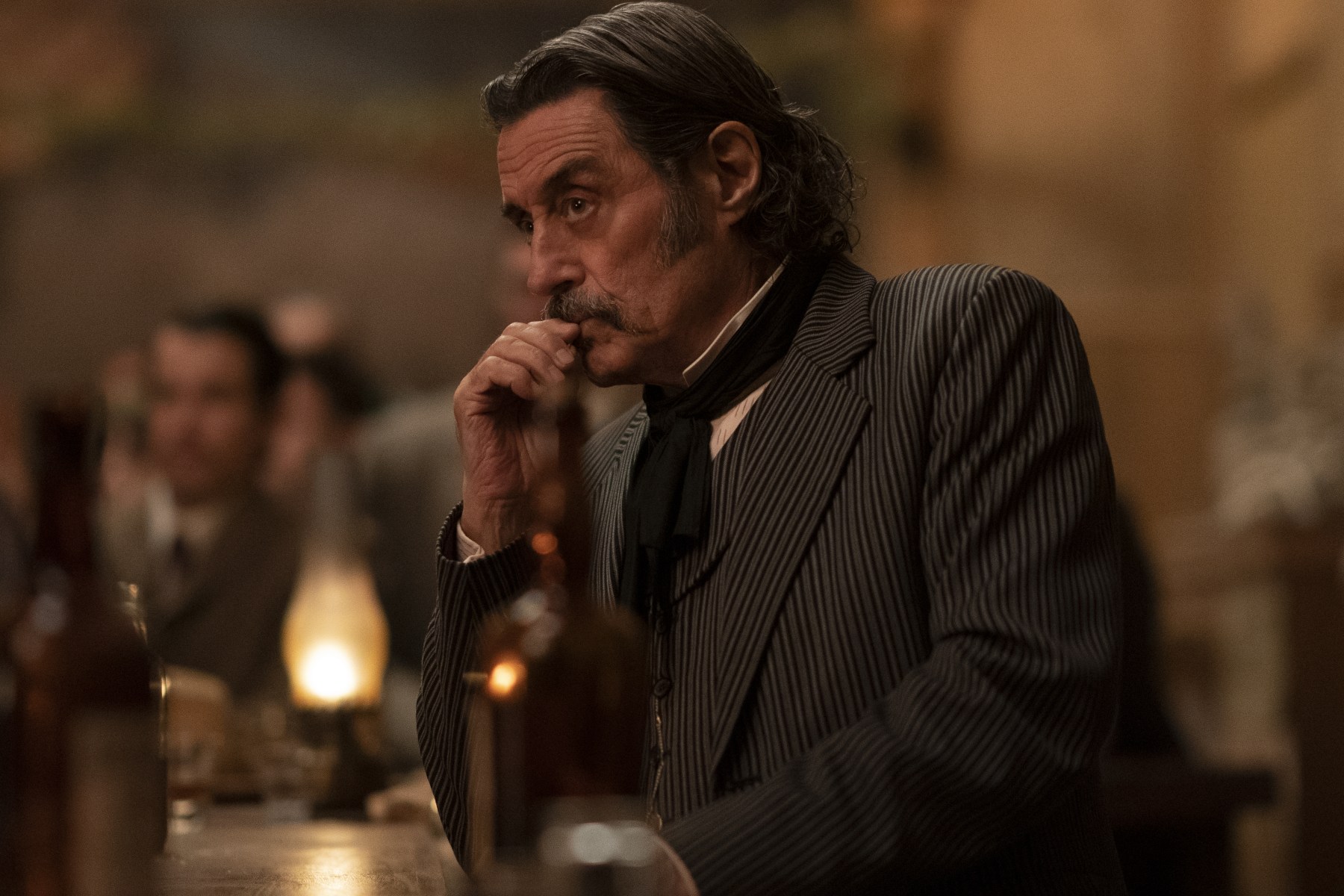 “Stall progress he may, stop it he cannot,” George Ambrose Hearst (Gerald McRaney) harrumphs when the dogsbody mayor E.B. Farnum (William Sanderson) balks at the idea of using the thoroughfare’s newly installed telephone in Deadwood: The Movie. When Farnum does make a call, he yells into the receiver as if it were a hearing trumpet. God help him when the railroad comes.

The long-awaited film, which premieres on HBO on May 31, is set in November 1889, when the inhabitants of the violent mining camp – now a burgeoning town — are celebrating South Dakota’s statehood. Ten years have passed on the frontier since the cable channel canceled David Milch’s lauded Western serial after its third season ended inconclusively. The anticipated gunfight between Hearst’s men and supporters of the diabolical protagonist Al Swearengen (Ian McShane), owner of the Gem saloon and brothel, never materialized. Swearengen’s cold-blooded throat-slitting of the sweet-natured prostitute Jen (Jennifer Lutheran) — a ruse to save his favorite working girl, Trixie (Paula Malcolmson), who had attempted Hearst’s assassination — left a nasty taste in the mouth.

Milch was diagnosed with Alzheimer’s disease about two years ago, so we must accept that Deadwood: The Movie will bring us all the closure we’re going to get. Perhaps we’re lucky to get any at all given that 13 years have elapsed since the show came off the air and streaming and bingeing have become the fashionable modes of disseminating and consuming TV serials.

Those are not the only changes that make Deadwood’s one-off return a minor miracle. The show may have been truthful in depicting the sexual violence meted out to women in the West, but it luridly exploited it, too. The combined misogyny of Swearengen, his business rival Cy Tolliver (absent from the movie because actor Powers Boothe died in 2017) and prostitute-killer Francis Walcott (Garret Dillahunt), who hanged himself, would likely have prevented Deadwood being commissioned at all had the show first been proposed after the revelations concerning Harvey Weinstein and other sexually abusive film and TV industry figures began emerging in 2017.

What of the new movie? Modernity may have brought technological advances to Deadwood, but has time altered its big personalities (or their pathologies)? Swearengen has discernibly mellowed: he would just as soon drink Chinese tea as whiskey or receive a cuddle rather than a blowjob from the Gem’s sassy new teenage whore, Caroline (Jade Pettyjohn). But old enmities haven’t died. Swearengen, Marshal Seth Bullock (Timothy Olyphant), Alma and Trixie — soon to have a baby with Sol Star (John Hawkes) — are still ranged against Hearst. Now a Californian senator, the venal mining tycoon has returned to Deadwood to buy up land owned by good old Charlie Utter (Dayton Callie) or use his thugs to acquire it by fouler means. Lucky for Bullock that Calamity Jane has his back.

Amazon Prime began streaming HBO heavyweights — including Deadwood, The Sopranos and The Wire — in 2014. A binge of Deadwood’s first 36 episodes will demonstrate how Milch and his writers presented a viscerally realistic Western that was still radically revisionist in the way it subverted the genre as a morality play, deconstructed mythic figures like Jane and Wild Bill Hickok, and emphasized talk that blended ornate nineteenth-century diction with contemporary profanities.

The movie is a must-watch for the serial’s diehards, but it arrives with caveats. The film doesn’t work in isolation. Though it features handy flashbacks, the fine-tuned resonances of relationships carrying a lot of baggage — Swearengen’s with Trixie, Jane’s with Utter and Joanie, Bullock’s with Alma — will be lost on viewers who didn’t watch Deadwood from the beginning, which includes many millennials and all post-millennials.

While the Deadwood serial might compute with savvy modern kids more than ‘50s-‘60s Westerns like Gunsmoke and Rawhide computed with kids raised on Star Wars, it seems doubtful that many will spend a day and a half watching every episode before they see the movie. That’s a shame, because Deadwood is a hugely entertaining history lesson with a strong Dickensian flavor: it crucially shows how rampant violence, greed, corruption and, indeed, misogyny produced the conditions for the civilizing of the West.

Prowling the Gem’s balcony, which overlooks the thoroughfare, the dirty user and fixer Swearengen is Deadwood’s all-seeing visionary, a Machiavelli who paradoxically prevails over the settlement’s steady growth and the coming of schools and churches, easing progress with none of the robber baron Hearst’s cant. Like Mad Men’s Don Draper, Swearengen is a psychologically damaged builder, but a builder in Deadwood’s mud nonetheless.

The sex-addicted 1960s advertising exec and the pioneering saloon owner-pimp have much in common. Draper’s satyriasis is explained by his being raised in a Depression-era brothel by his prostitute mother; Swearengen was dumped by his mother in the orphanage that now supplies him with prostitutes. Angered by Trixie’s “infidelity” with Star in Season One episode “Jewel’s Boot Is Made for Walking,” he abusively orders oral sex from an unnamed whore while speculating that his mother either became a mayor or a “ditch” for male ejaculate — a sick Oedipal fantasy if ever there was one. Neither Swearengen nor Draper’s charm obviates their contempt for women.

Deadwood: The Movie is noticeably detoxified; only the neophyte Caroline’s offering Swearengen his nightly suck sticks in the craw. As mentioned before, he often opts for mere affection. More community-minded and sentimental than the serial, the film allows Big Al’s redemption. He is physically ailing, his testosterone has ebbed. His intimations of mortality — which prompt his generosity to his beloved Trixie and henchmen Dan Dority (W. Earl Brown) and Johnny Burns (Sean Bridgers) — instill a plaintive, autumnal mood.

There is also a birth and a wedding, harbingers of a future beyond Swearenger’s kind. Such rituals recall John Ford’s Westerns. The return of Alma and Hearst to Deadwood suggests the influence of The Man Who Shot Liberty Valance (1962), as if they represent the twin sides — beneficent and self-aggrandizing — of James Stewart’s Ranse Stoddard, who in Ford’s sorrowful masterpiece revisits Shinbone as a senator.

Liberty Valance’s famous words “When the legend becomes fact, print the legend” became a maxim for the mythification of the West. In its troubling brilliance, the Deadwood serial argues for printing “the fact.” The movie spits its share of bullets, but in its surprising warmth and near-elegiac tone, it adds a touch of legendariness as well.