People with names like Kardashian, Hadid and Diplo hang out at his clubs. Where does he go for some downtime?

Grutman in his living room, adorned with a Hush sculpture, a Nicolas Party painting, leather couches, and a giant Baxter lamp.
By Elyssa Goodman @MissManhattanNY

David Grutman’s phone dings. He reaches to silence it before settling into a sleek grey and wood wicker chair at the head of a long sugarwood table on his patio. Overhead, a bright neon sign forms in giant red letters the word “Goldrush.” In the distance, behind his pool, rests “Groot,” an 82-foot Pershing yacht. Grutman’s dog, a spotted English setter named Charlie, curls up near his feet on bright blue, Cuban-inspired tile.

Grutman is the hospitality entrepreneur responsible for LIV, a Miami nightclub that is quite possibly the most successful club in America, as well as clubs like STORY and restaurants like Komodo and Papi Steak. Grutman’s most recent venture is eatery and cocktail bar Swan and Bar Bevy, which he created with longtime friend Pharrell Williams. Since he’s one of those guys who never has enough projects, he’s also the Creative Director of Prince to boot. There’s nary an A-list celebrity who hasn’t walked through one of Grutman’s establishments, be they Kardashian or Hadid, West or Bieber, Khaled or Diplo — the list goes on.

A former bartender, Grutman rose through the ranks of Miami nightlife from humble beginnings at a small bistro in the Aventura Mall. Charismatic and hardworking, Grutman was also a master networker and made his way through South Florida’s nightlife industry. Later, a client had a real-estate developer son who needed a manager for a new nightclub at Miami Beach’s iconic Fontainebleau hotel. The club was LIV. Grutman reached out to friend Ed Razek at Victoria’s Secret and got the lingerie scion to move the company’s famed annual fashion show to Miami for the club’s opening. Forty-five-plus million dollars a year later, LIV is still among the premier nightclubs in the U.S.

It makes sense, then, that a hospitality entrepreneur would feel more comfortable hosting guests in his 6,400-square-foot home on Miami Beach’s Sunset Islands than in his Lincoln Road office. Meetings are held at the long wooden slab table outside, graced by the aforementioned Goldrush sign overhead — an authentic piece from a strip club in downtown Miami of the same name, Grutman says. “It’s just iconic to Miami and I think the name speaks to the spirit of Miami,” he tells us later via email.

He says being on the water makes for good business, as does the chef in the kitchen. Meetings are also held in the living room, which is graced by artwork from Brazilian street artist Kobra, British graffiti artist Hush and art-world star Nicolas Party, among others. Four to five days a week, Grutman takes guests out on “Groot,” which features boat merch from the likes of Chrome Hearts and Virgil Abloh. “I feel like it’s more of a hospitality move than anything,” he says. “I think it’s a great way for me to connect people that aren’t from Miami to Miami by seeing it from the water.” 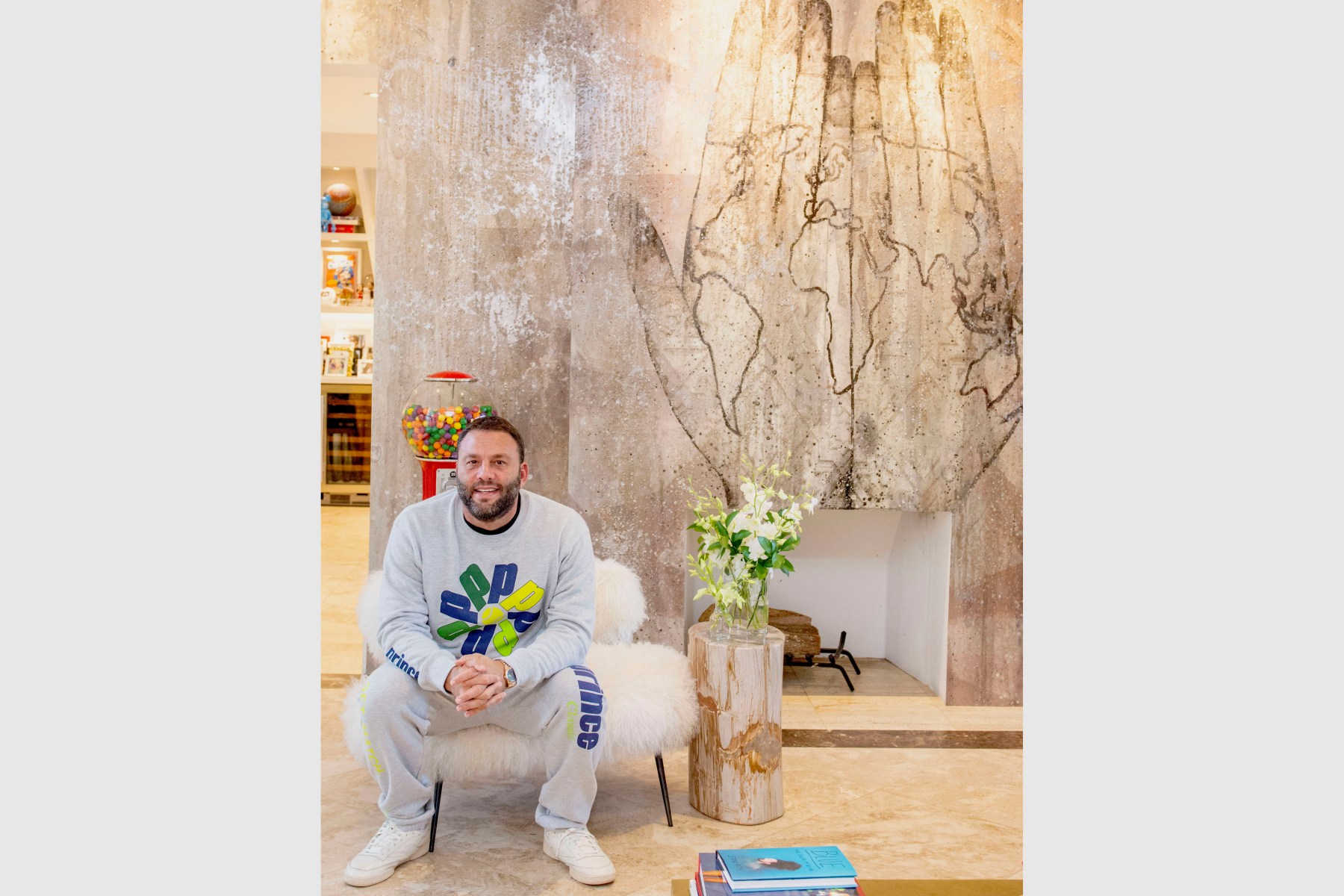 Grutman with a commissioned mural, “The World is Yours in Gold,” by artist Alex Turco. 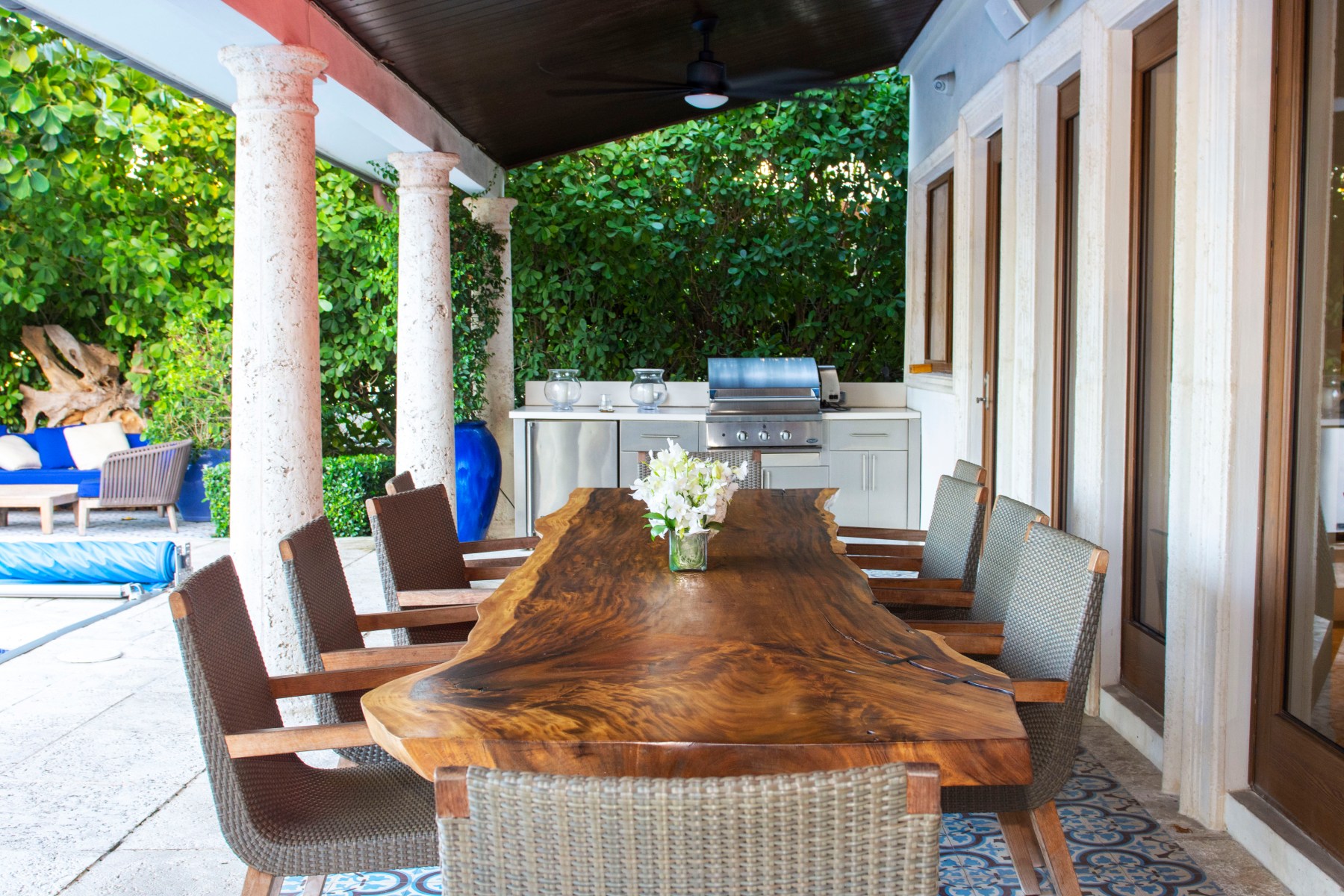 Grutman found this table in Wynwood. “I don’t even go to my office, I do all my meetings here,” he says. 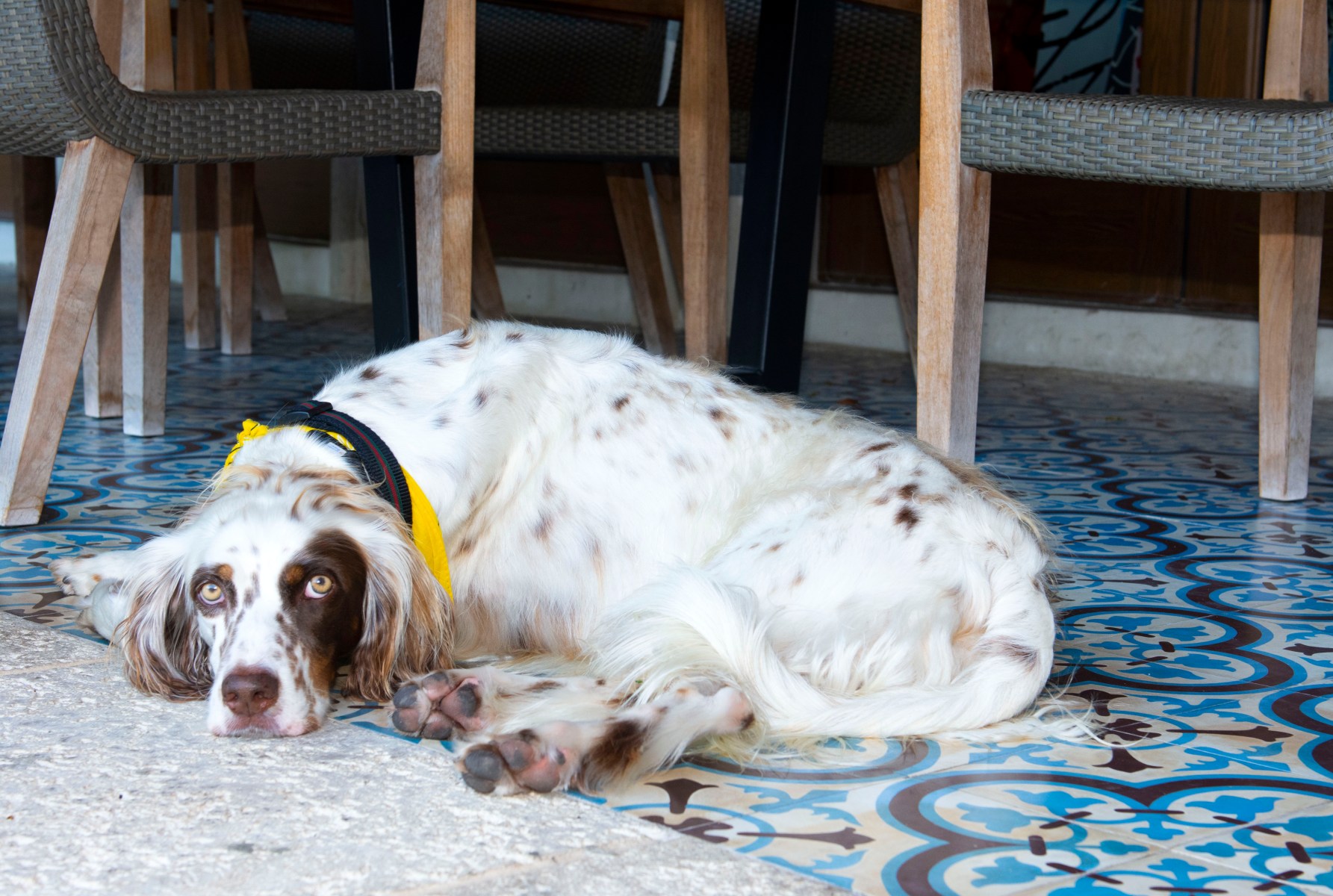 Grutman’s English Setter, Charlie, has no time for your nonsense as he reclines on Grutman’s Cuban-inspired tile. 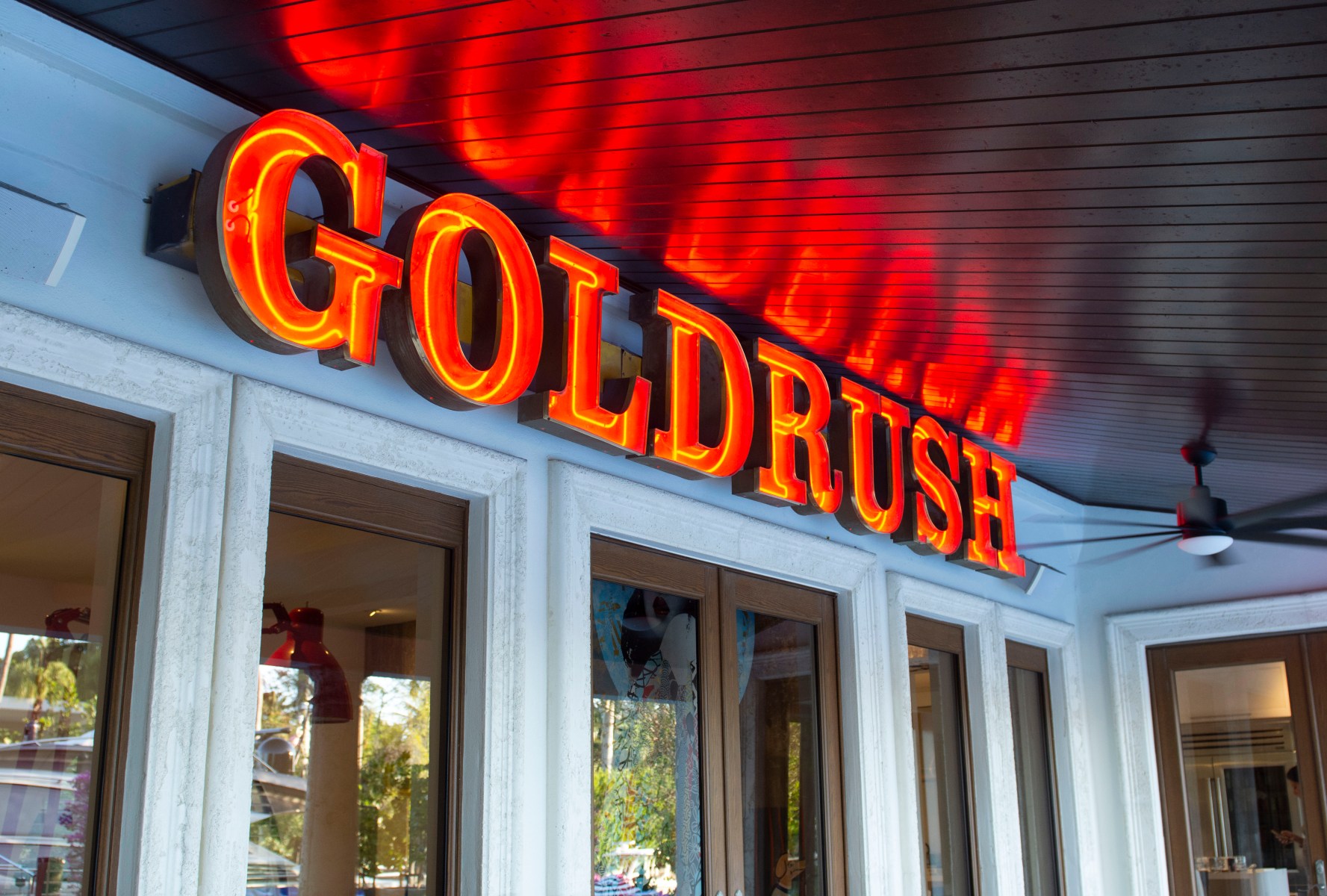 An authentic sign from a downtown Miami strip club of the same name adorns the patio above Grutman’s long sugarwood table. 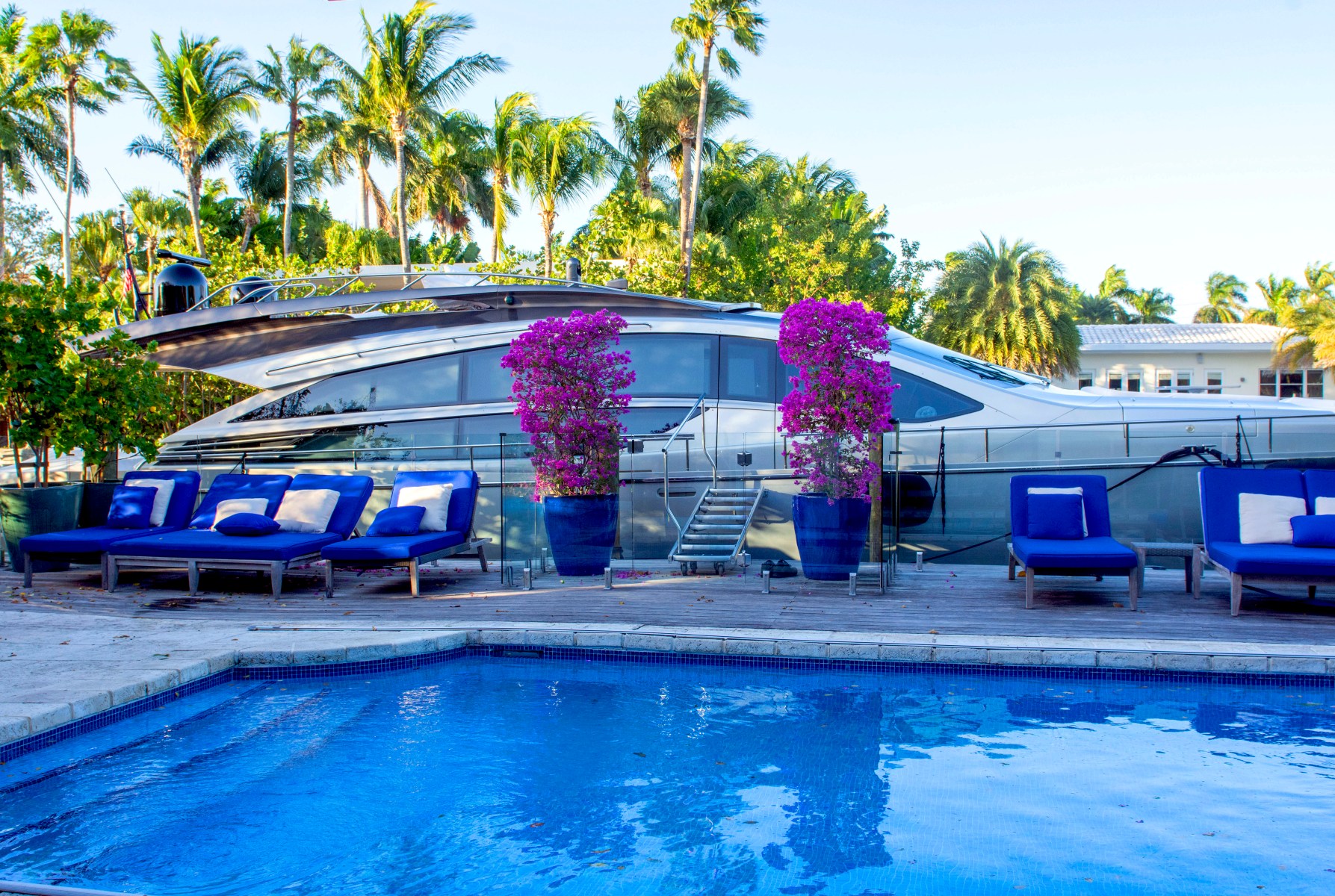 Behind the pool rests “Groot,” an 82-foot Pershing yacht, on which Grutman takes his guests. “it’s more of a hospitality move than anything,” he says. 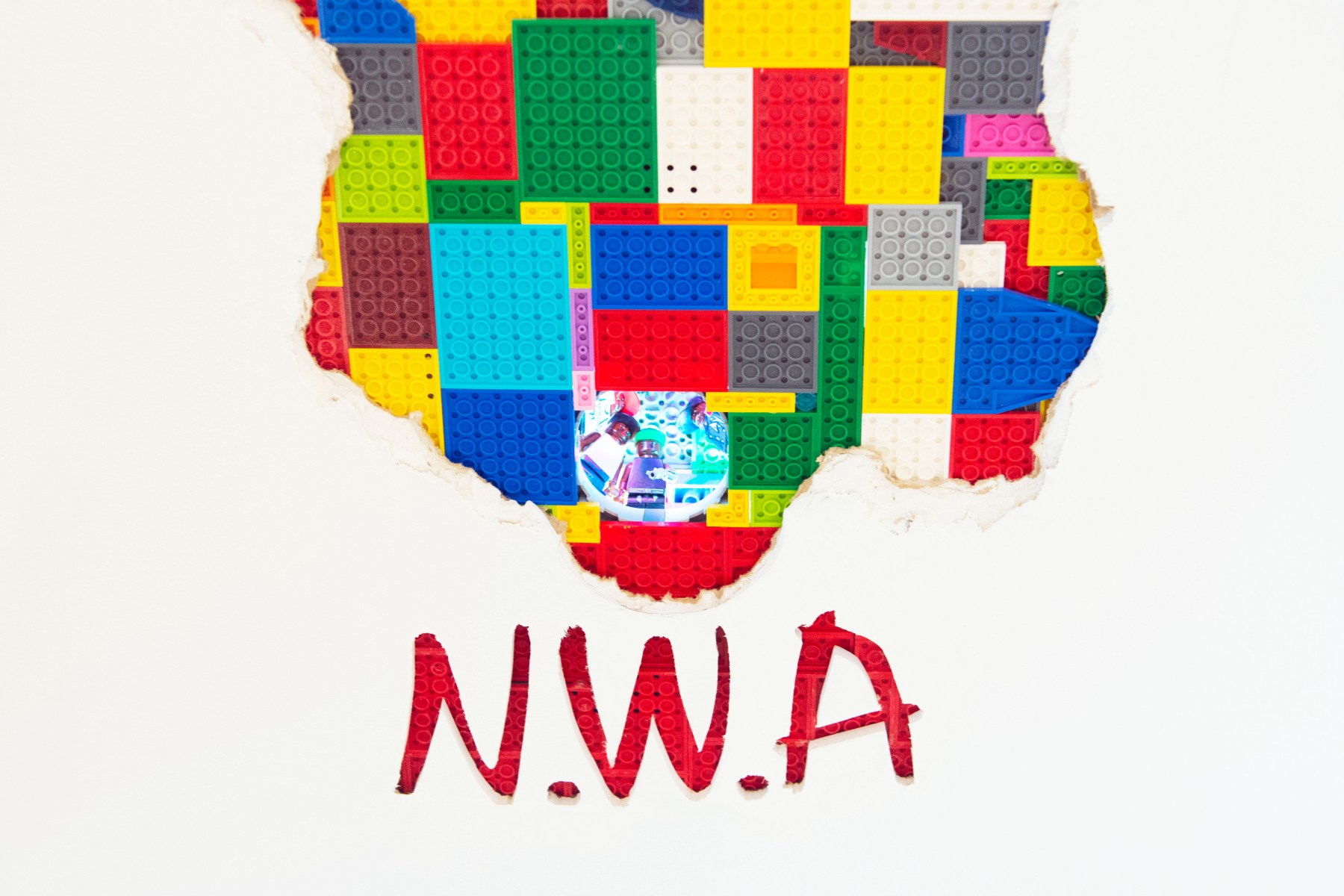 Part of a Lego wall installation made by artist Dante Dentoni. It features some of Grutman’s favorite things: a Lego version of his yacht, as well as scenes inspired by 2 Live Crew and N.W.A. 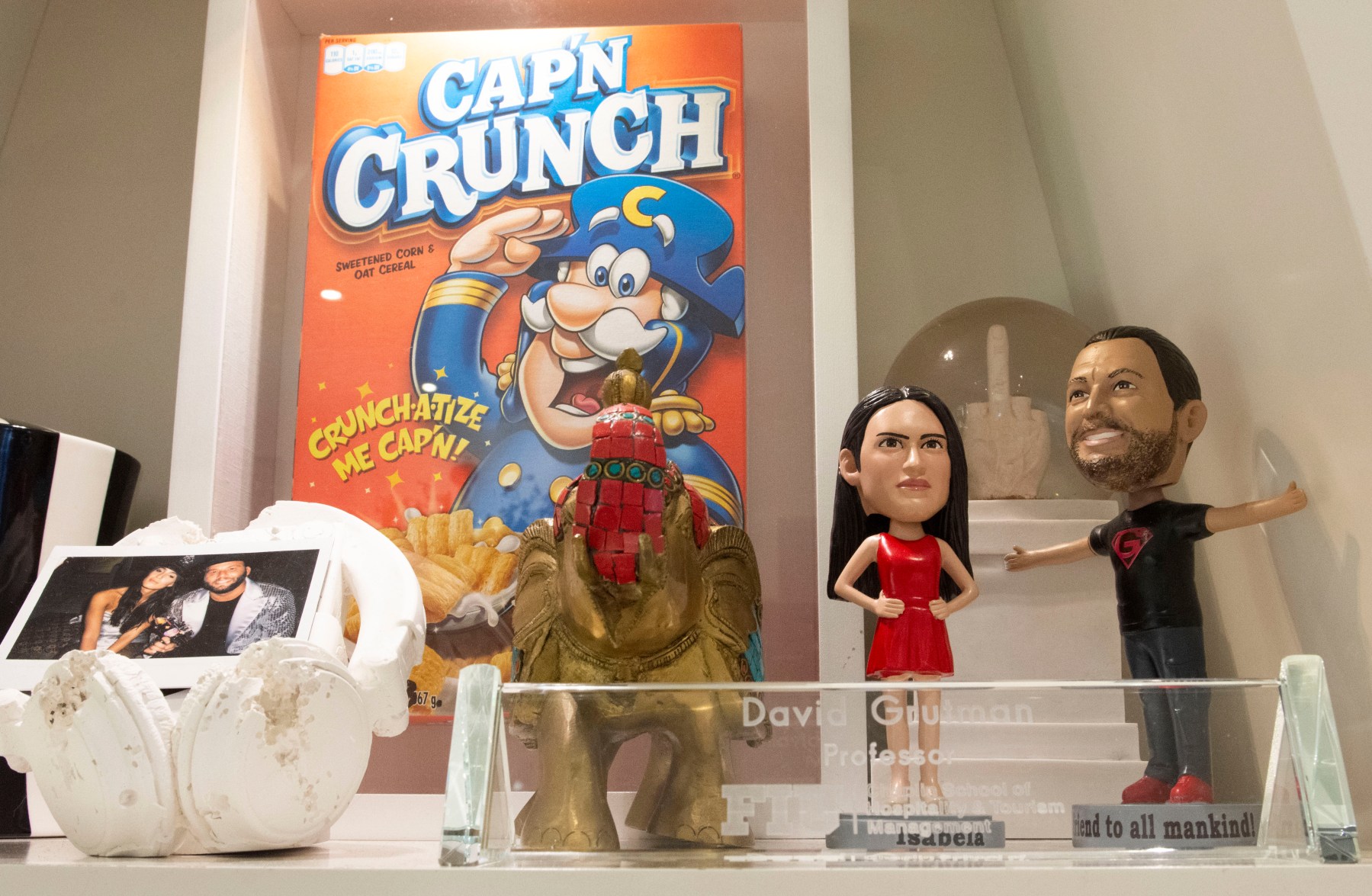 Bobbleheads of Grutman and his wife, model Isabela Rangel, alongside a Captain Crunch box by artist Peter Tunney. 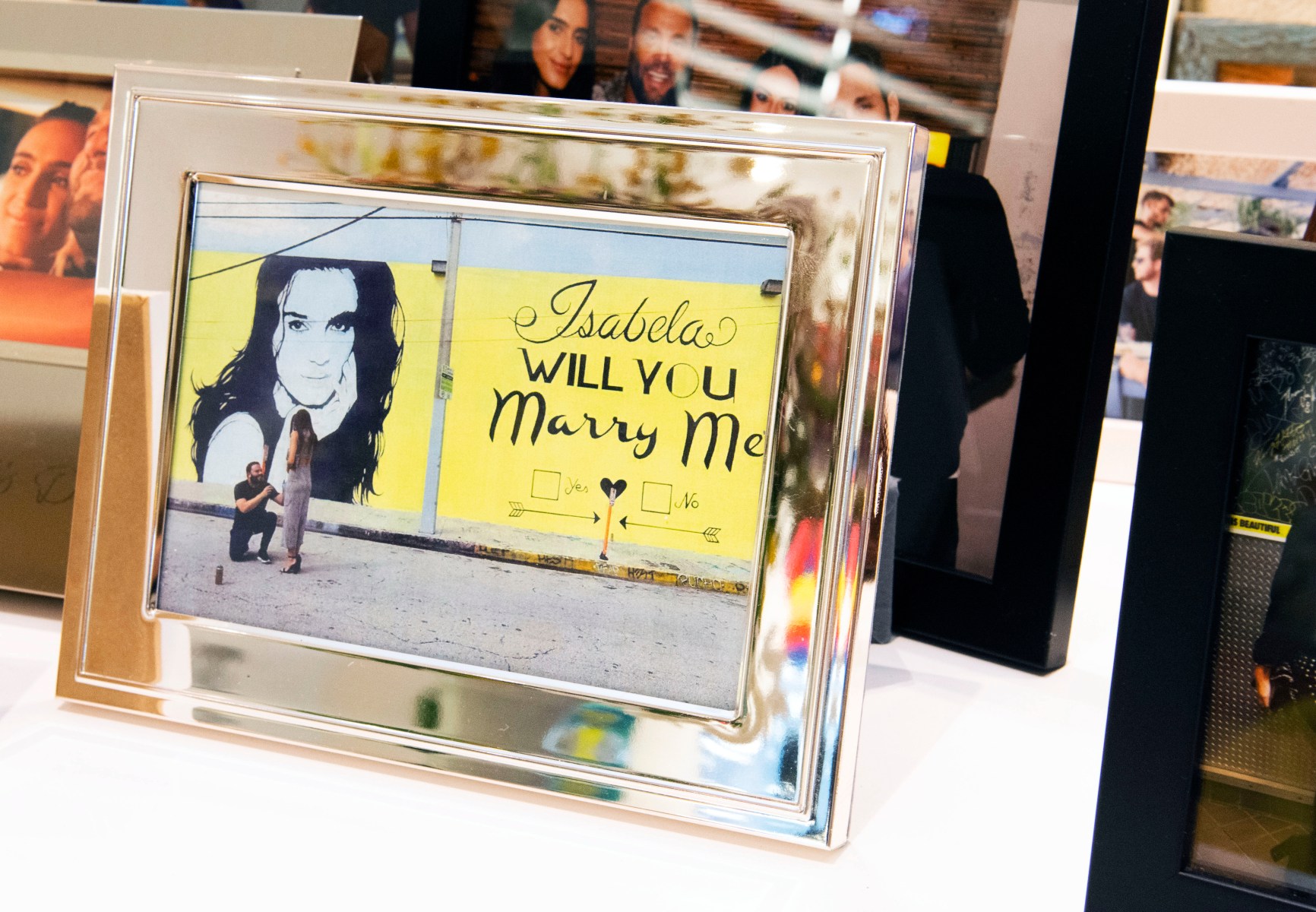 Grutman proposed to his wife, model Isabela Rangel, with a mural in Miami’s Wynwood art district in 2015. 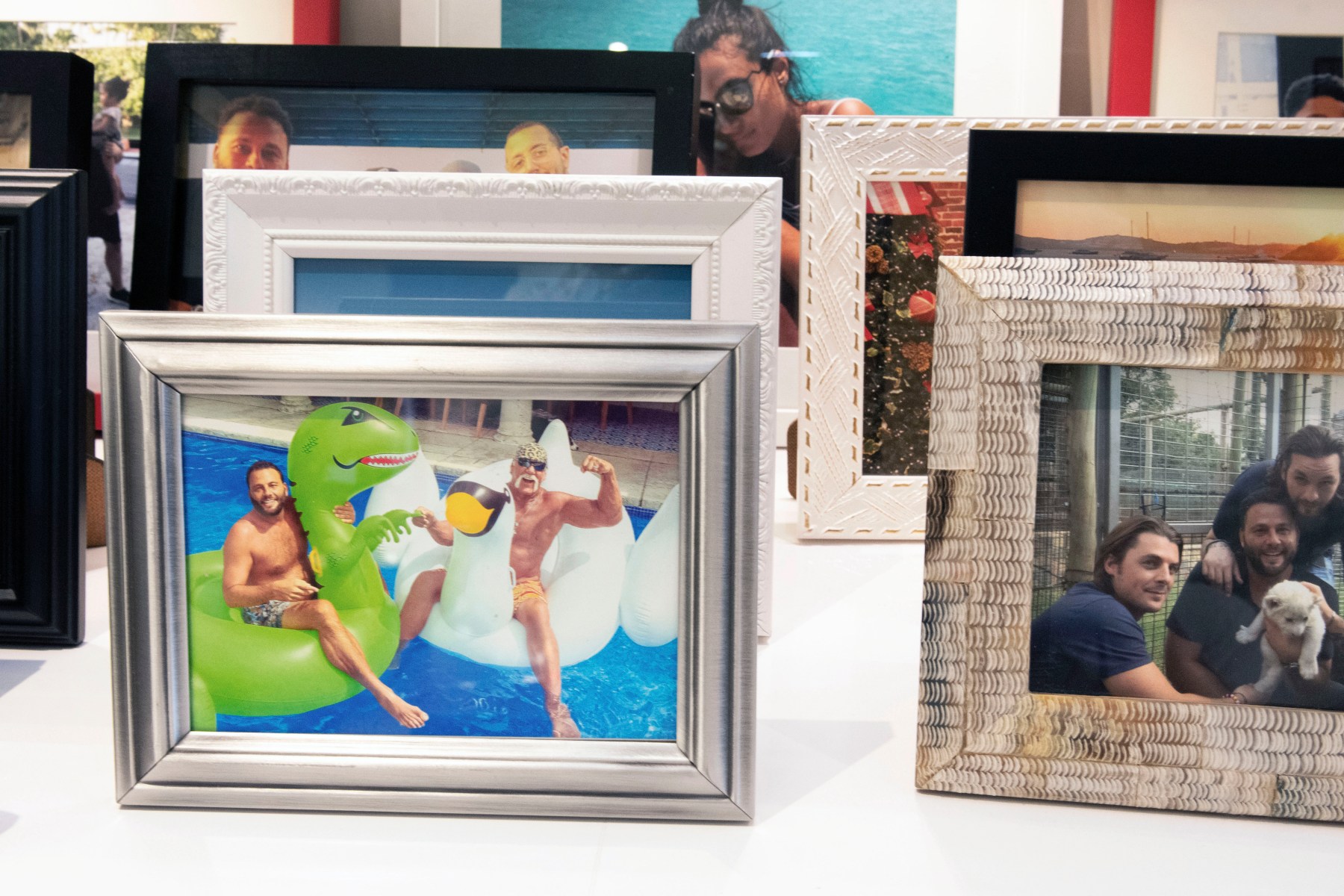 Grutman and Hulk Hogan on an inflatable dinosaur and swan, respectively, in the pool at Grutman’s Miami home. 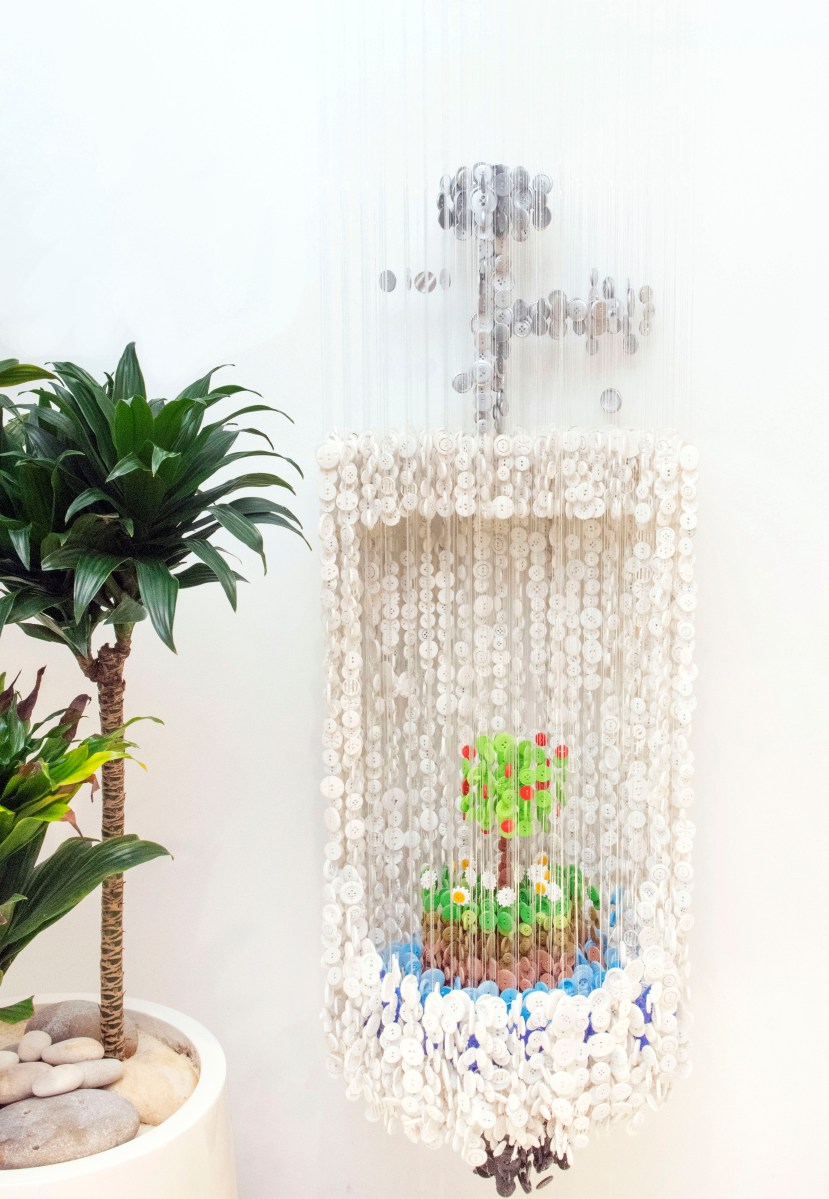 Urinal sculpture made entirely of buttons by artist Agusto Esquivel. “What makes me laugh is the flower growing in the middle,” Grutman says. 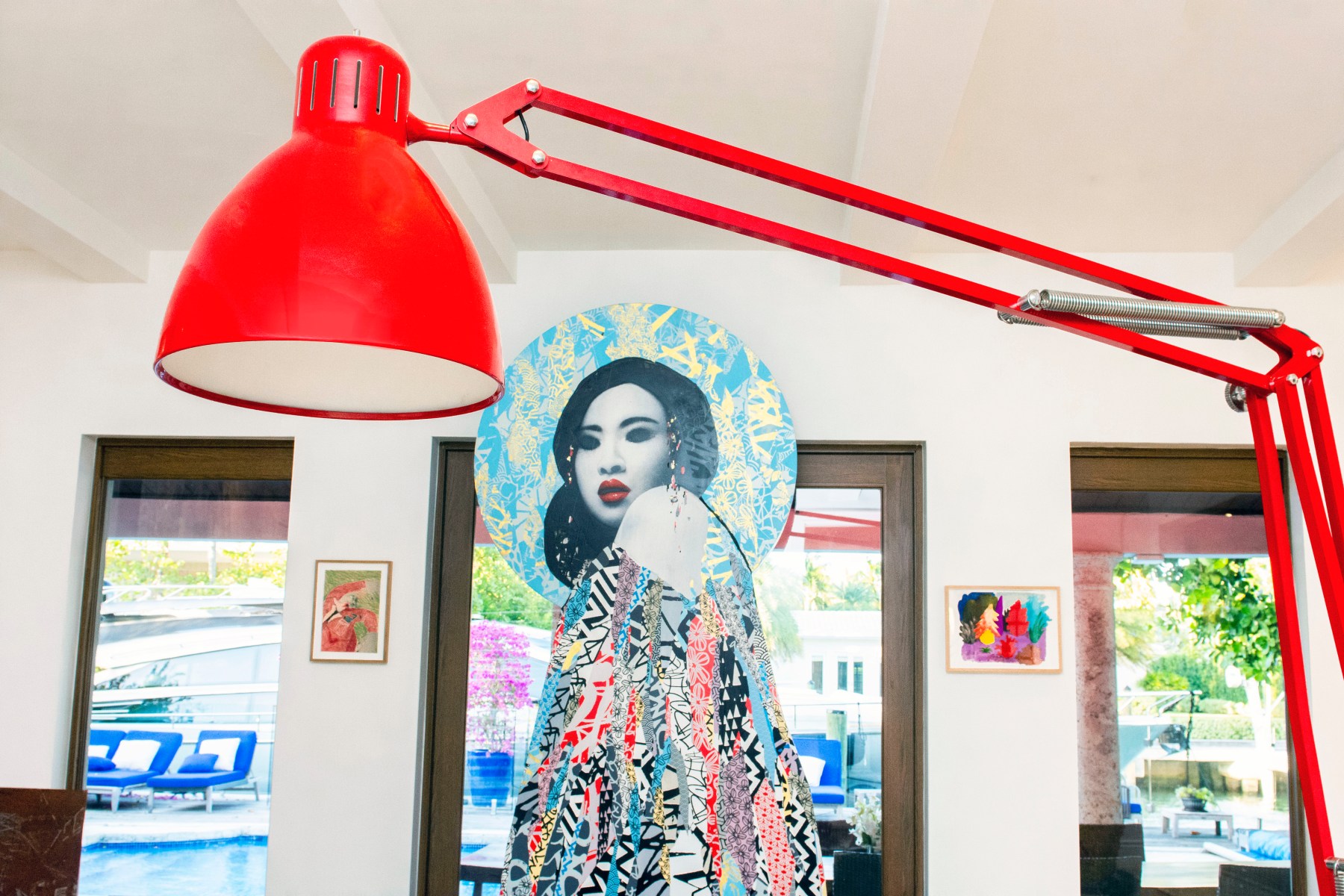 British artist Hush created the lovely lady in the background and the giant red lamp is from Italian company Baxter. 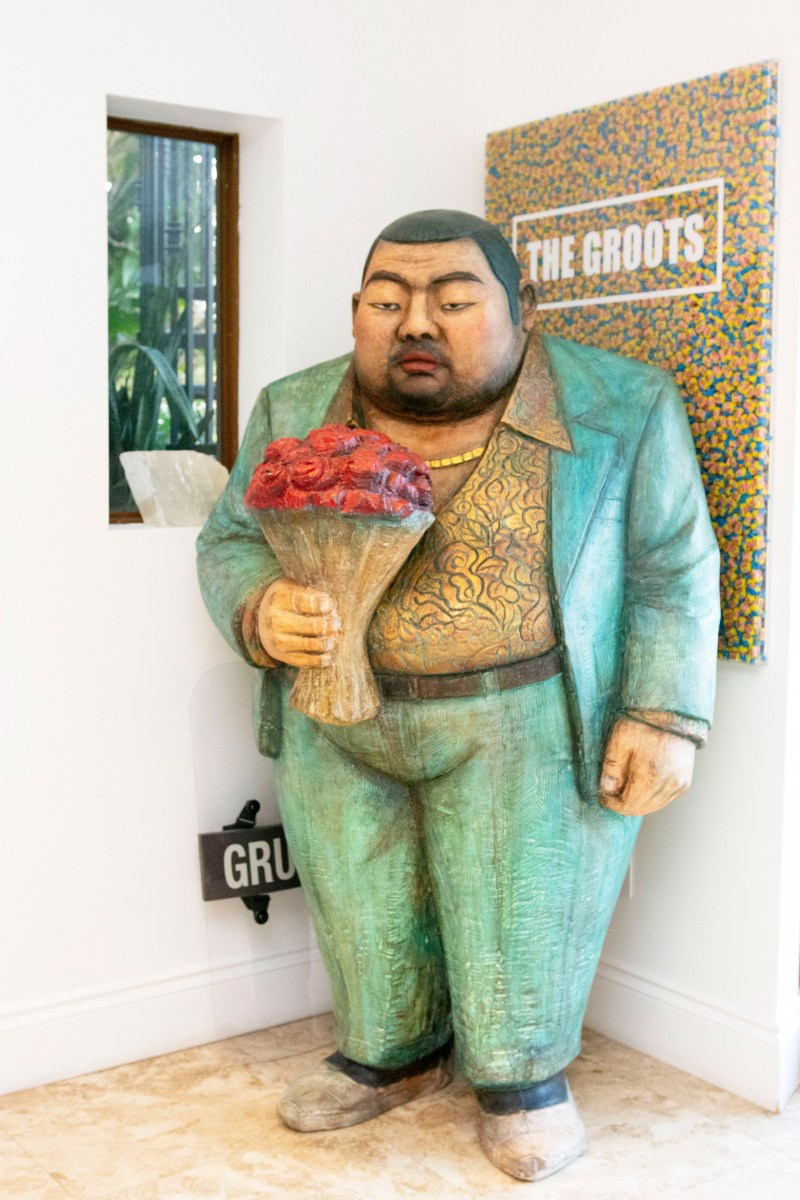 The “Jealous Man” statue by artist Kim Won Guen resides near Grutman’s kitchen and is a favorite for photo-ops among guests. 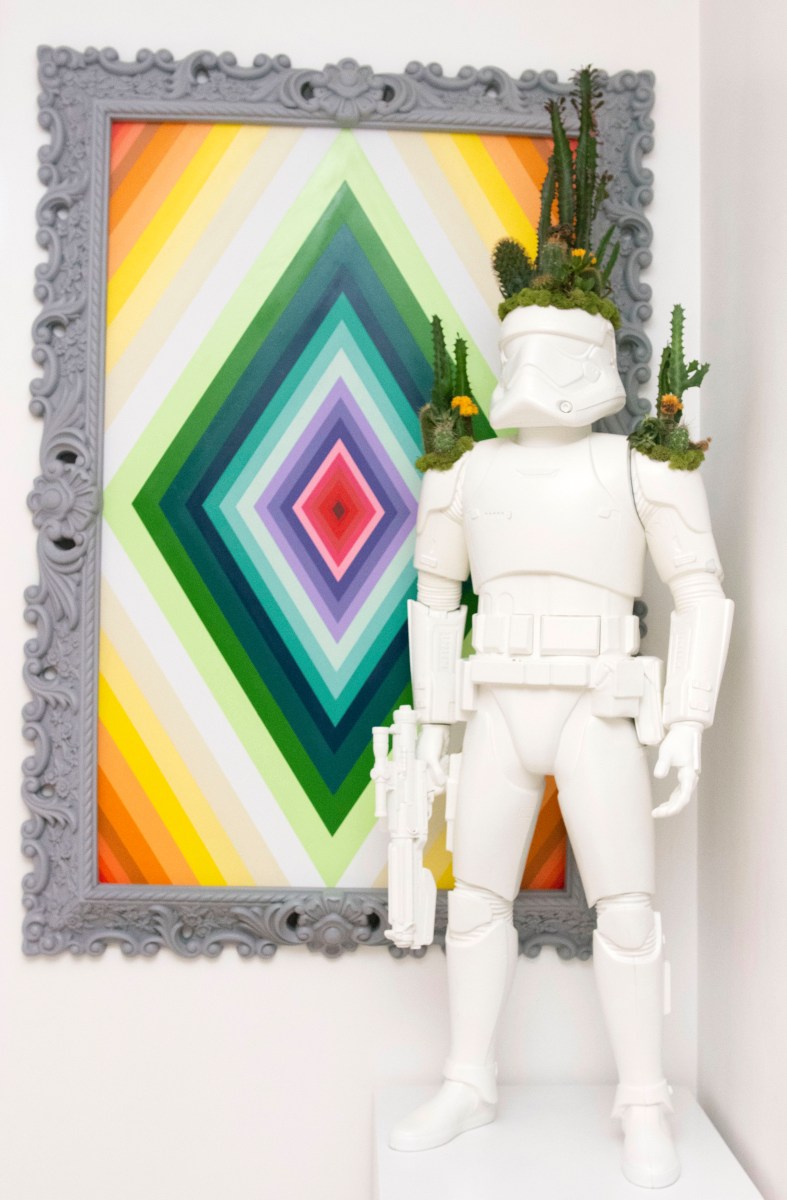 A stormtrooper accented with tiny cacti, by Miami design firm Plant the Future, also hangs out near Grutman’s kitchen. 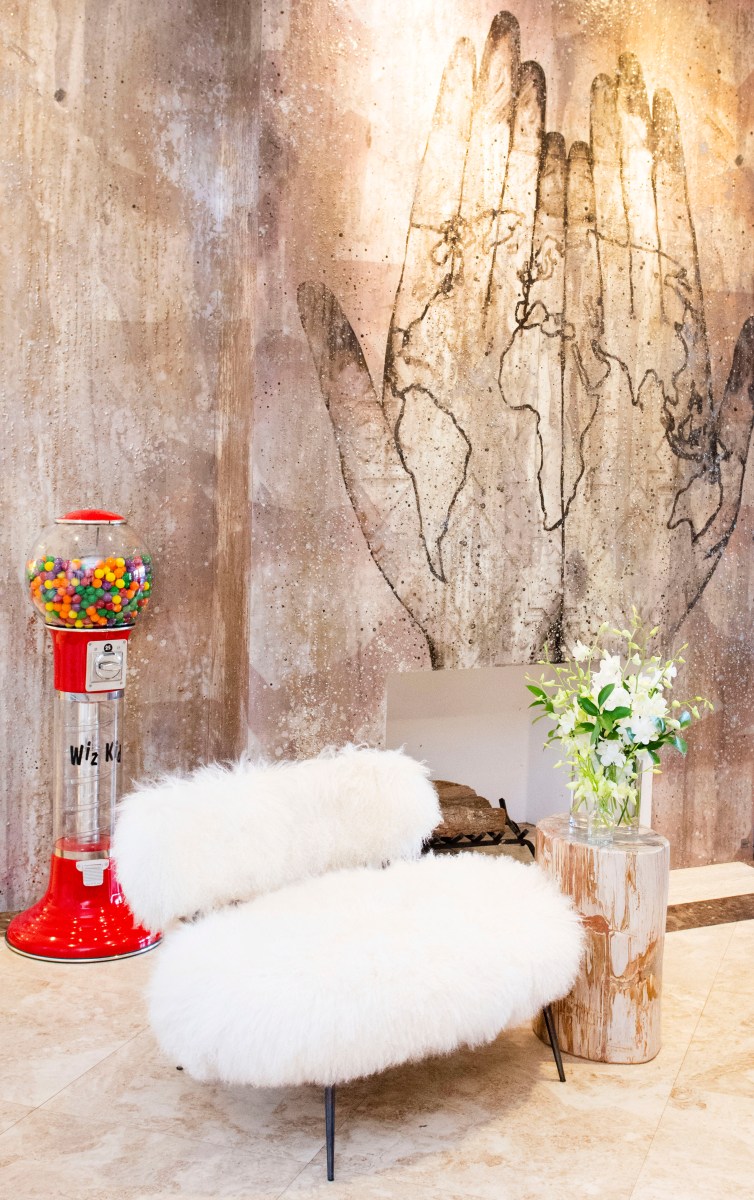 The gumball machine is filled with Grutman’s favorite Nerds gum, and the mural was a special commission from artist Alex Turco. 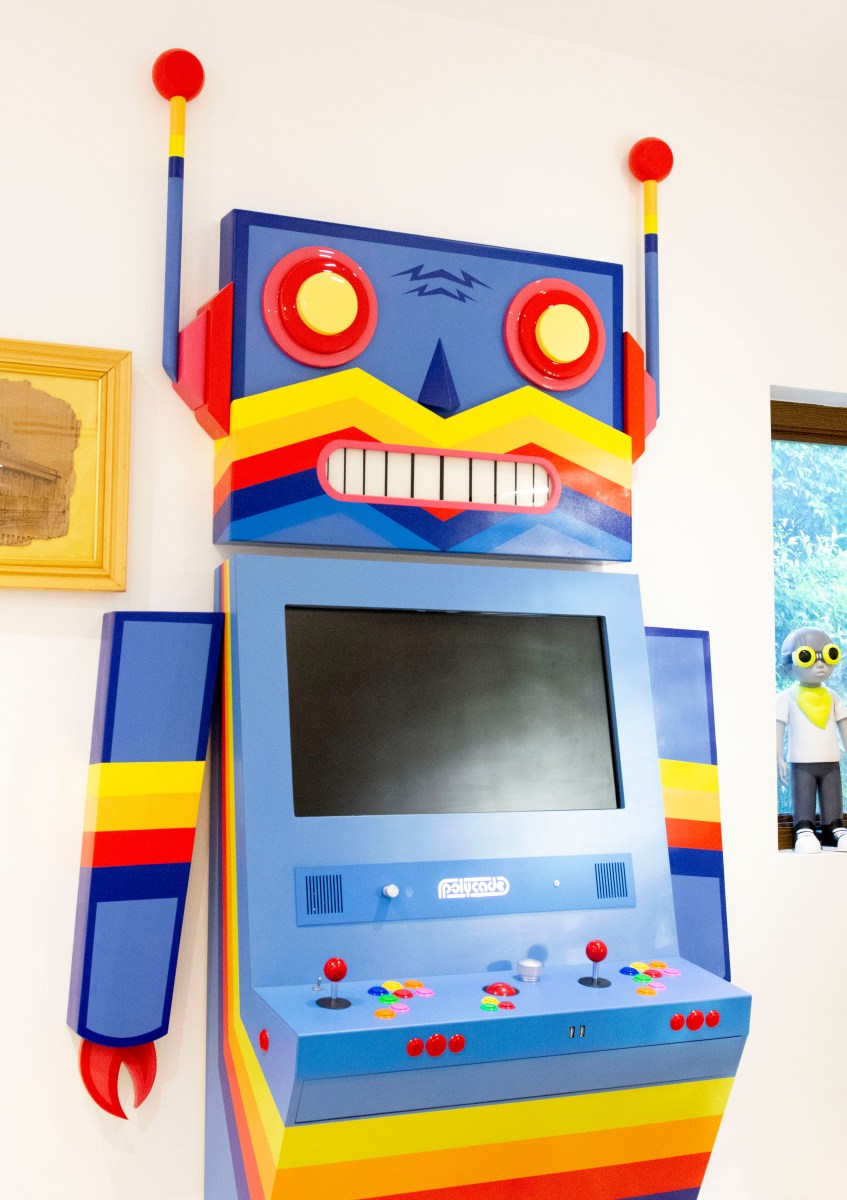 There are over 200 games on Grutman’s custom-made Alex Yanes Polycade console, “and it works!” he says. 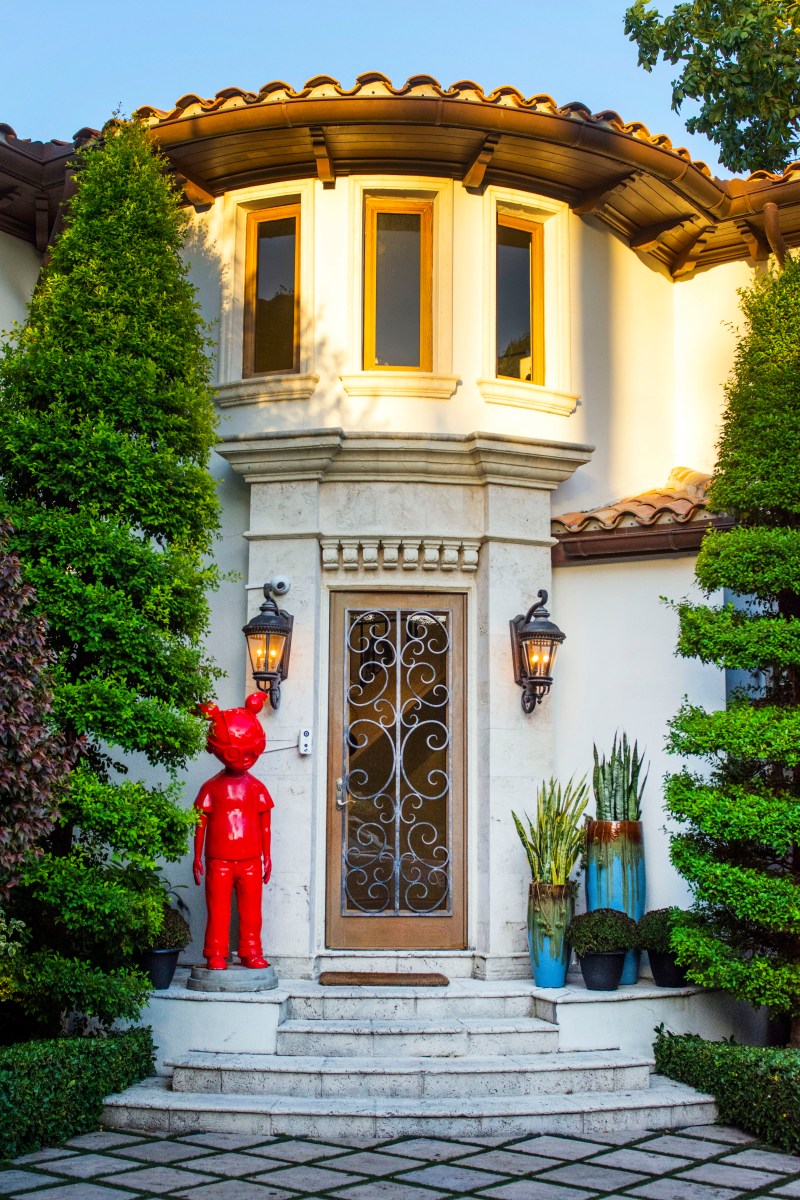 There’s even artwork on the exterior of Grutman’s Mediterranean-inspired home in Miami’s exclusive Sunset Islands. 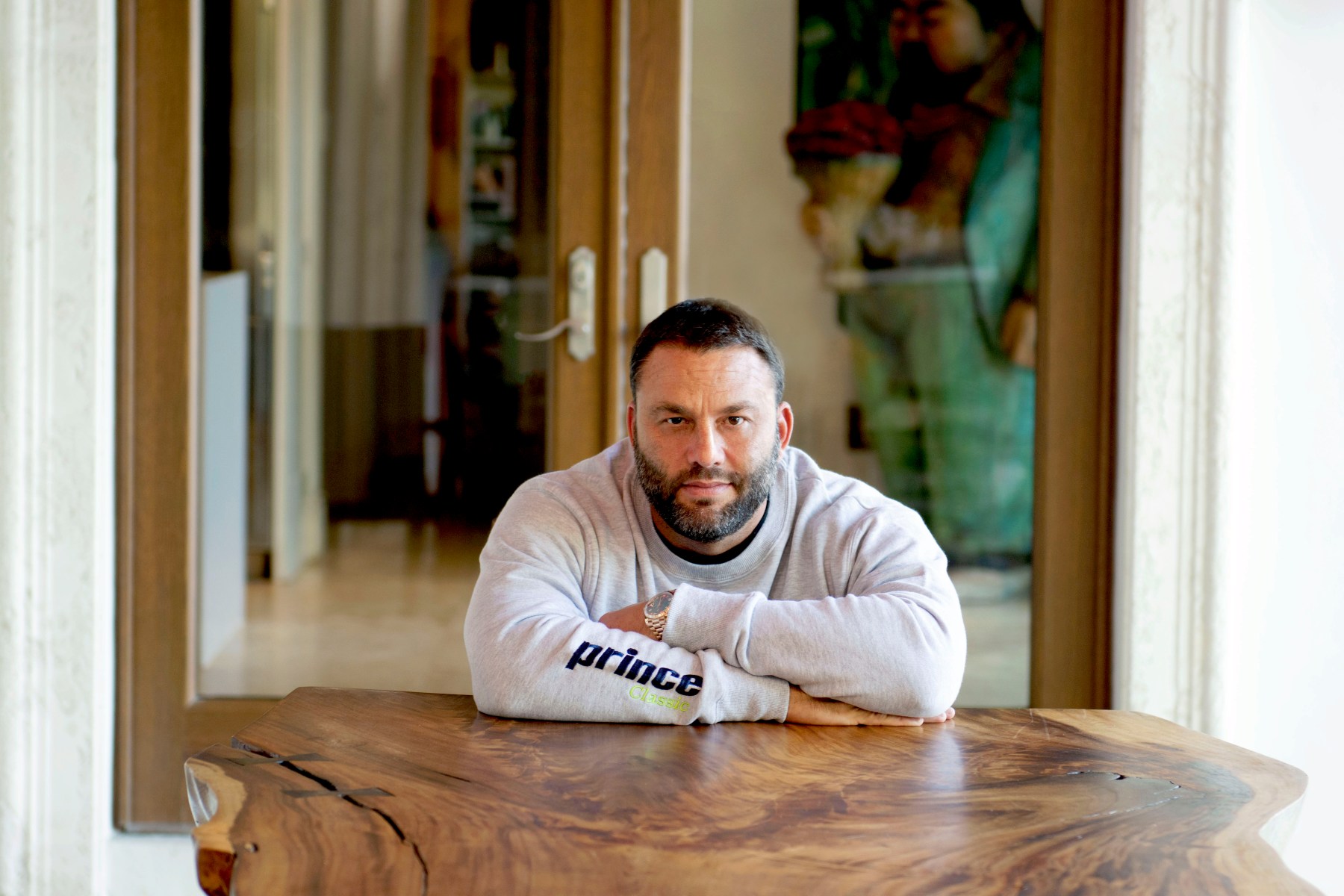 David Grutman outside on back patio. “I love this space,” he says. “I feel at home and I connect better with people, the energy over here.”

Before walking me inside, Grutman waves to his daughter Kaia, who is splashing in the pool. Grutman’s home, which he shares with his wife, model Isabela Rangel, and his two daughters, two dogs and two cats, is a kaleidoscope of color and playful sensibilities accented by classic modern furniture. A pristine white kitchen hosts a collection of photos from his life, like his proposal to Isabela with a commissioned mural by artist HG in Miami or a shot of him and Hulk Hogan on giant pool floats. Nearby is a custom-made Alex Yanes Polycade console, designed to look like a robot. “There are over 200 games on it and it works!” Grutman says. “It’s always a hit with guests.”

There’s also a urinal sculpture made entirely of buttons by artist Agusto Esquivel. And we can’t forget the gumball machine (filled with Nerds gum, which he loves), a commissioned mural over the fireplace called The World is Yours in Gold by artist Alex Turco, a giant red Baxter light fixture resembling an oversized desk lamp, and perhaps most notably, a Lego wall installation made by artist Dante Dentoni. It features some of Grutman’s favorite things: a Lego version of his yacht, as well as scenes inspired by 2 Live Crew and N.W.A: “2 Live Crew and N.W.A. were my guys growing up,” he says. “They were the first rap guys with cuss words.” Now that Grutman’s life is filled with “rap guys” on a regular basis, he still stays true to his roots.

And Grutman is constantly on the rise, it seems. In October 2019, LiveNation bought a majority stake in his company, Groot Hospitality. He’ll also continue to expand his business beyond Miami in the next two years, with new venues in Dallas, Las Vegas and even Dubai. It would seem Grutman’s description of his Goldrush sign rings true for his own life: “It’s a gold rush here,” he says. “The hustle mentality is strong.” 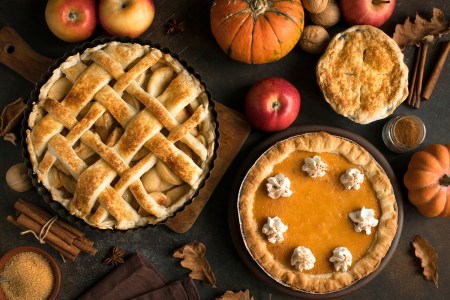