The terrible fate of American prisoners of war shot down by Japanese over Chichijima.

A portrait of the officers of the USS Finback and some U.S. Navy pilots and crew rescued by the Finback. Kneeling second from the left is Ensign George Bush, whose bomber was shot down by the Japanese near the Bonin Islands. September 1944. | Location: aboard the USS Finback, on the Pacific Ocean. (Photo by © CORBIS/Corbis via Getty Images)
Corbis via Getty Images
By Jennifer Wright

“There is a Law of Nations, it is true,
But when the moment comes, remember,
The Strong eat up the Weak.”
-Line in a Japanese children’s song, circa 1880.

You probably think that you have a pretty solid understanding of the worst possible outcome if you go to war. Many people would say that it’s that you might die. Others might argue that it’s being terribly wounded. Or that you could be captured alive and held prisoner for God knows how many years.

That’s wrong. None of those outcomes are the worst.

The worst possible outcome is being eaten alive, piece by piece, like something out of Cormac McCarthy’s The Road.

And it happened not all that long ago during WWII on the Japanese island of Chichijima.

The incident is best chronicled in detail by James Bradley in his book Flyboys: A True Story Of Courage. A brief explanation is that, in 1944, during WWII, a group of nine American airmen were shot down on the island of Chichijima.

One, George H.W. Bush, would narrowly evade capture by the Japanese.

The rest were not so fortunate.

Conditions on the island were brutal in the base case. Prisoners were malnourished and periodically executed. But, again, that’s not the worst thing that can happen to someone in wartime.

On February 24th, a day after beheading one of the American prisoners, Colonel Kato hosted a drinking party in his quarters on Chichijima for General Tachibana and Major Matoba. When they arrived they were upset to see that there was not enough meat to go with the vegetables being served.

The general, who, Bradley stresses, was pretty drunk, suggested that they could get some meat from the execution, and told his hosts they “had to have enough fighting spirit to eat human flesh.”

They did, apparently, have enough “fighting spirit” to eat the man’s partially decomposed (he’d been buried!) liver and flesh after cooking it in a pan. The next morning, the remaining flesh was sent to the presumably hungover general’s quarters.

Former President Bush was seemingly haunted by his narrow escape from this possible fate, and has spoken about survivor’s remorse, wondering “why was I spared?”

I don’t love that George Bush Sr. is seemingly always grabbing women’s butts, but it’s fair to say that he’s been through some stuff and maybe we should cut him some slack.

I’d love to say this was a fairly isolated incident, but this wasn’t the only instance cannibalism occurred during these years. Severe food shortages lead to gruesome acts among the Japanese army. Bradley records some of the horrors. One interviewee told of how:

There was absolutely nothing to eat, and we decided to draw lots. The one who lost would be killed and eaten. But the one who lost started to run away so we shot him. He was eaten… I met some soldiers in the mountains who were carrying baked human arms and legs. It was not guerrillas but our own soldiers we were frightened of.

Cannibalism can be horrifying in the base case, but it’s infinitely more horrifying to realize that the troops wanted — or, if they were starving, really needed — the meat to remain fresh. The heat of the tropics meant that left on its own, it did not do so for long. That meant the people were hacked to death piece by piece. Their ears, noses, cheeks, toes, buttocks and thighs would be carved off while they were still alive. Their organs and other more essential parts would be saved for last.

One soldier reported that, after being chosen to be cannibalized, victims were taken into a hut where meat would be carved from their bodies. They were then thrown into a ditch, from which the shrieks of the dying, brutalized men emanated.

In the event anyone is thinking that this is maybe just a cool thing they should embrace (doubtless there will be some Milo Yiannopoulos-style “provocateur” who wants to suggest it sometime soon), objections to the act are more than just cultural taboos. Cannibalism results in a prion disease called Kuru. It causes its victims to lose muscle control as well as control over their emotions. It’s sometimes referred to as the “laughing death” as it provokes uncontrollable laughter in its victims as they die.

So, it is fair to say that people who eat people are not the luckiest people in the world. 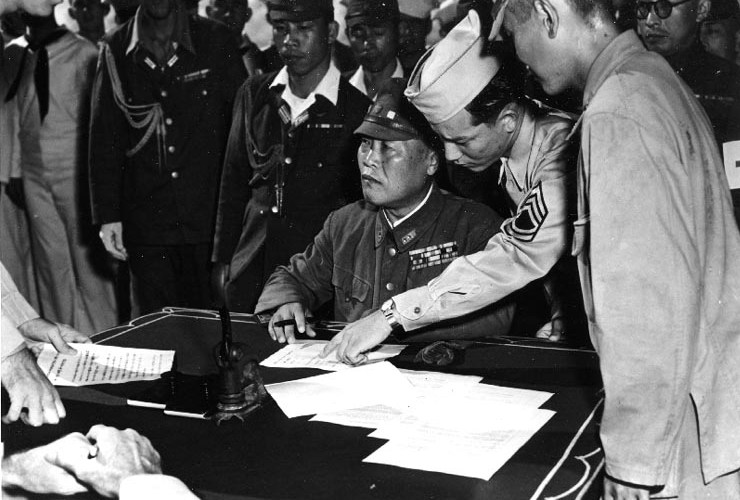 General Tachibana certainly wasn’t. He was later executed for his war crimes during the Chichijima incident. But the story is hopefully a reminder that war is hell, and hell includes eating human beings.

And that it’s not okay, even if you’re really drunk.