The Attack of the Turtle, America’s First and Most Unusual Submarine

The plan to use this man-powered solo sub was an insane one. And it worked — kind of.

Just a few weeks after the new United States of America declared its independence in 1776, a thunderous explosion shattered the peaceful dawn morning just outside New York’s harbor and sent a geyser of water into the sky, seemingly out of nowhere.

As British troops scurried about trying to figure out what the hell was going on, some Americans who had been secretly watching and waiting tried to contain tight smiles. The insane plan had worked. Kind of.

The explosion was the result of the first submarine attack in American history, one undertaken by a particularly unlucky colonial sergeant at the helm of what was lovingly called the Turtle – a one man, man-powered submarine shaped like an egg. 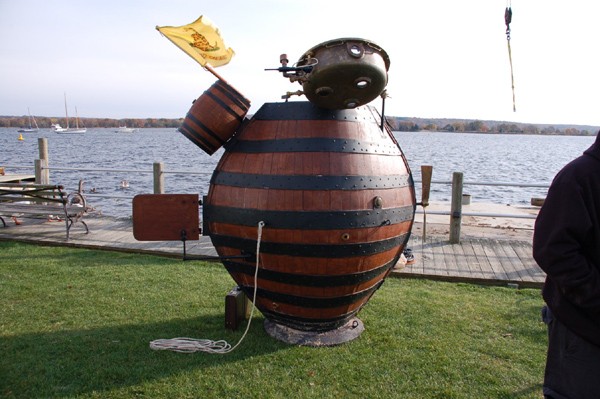 The Turtle was, according to the U.S. Navy’s history, the invention of Yale undergraduate student David Bushnell and combined several submersible firsts – namely the use of water for ballast, screw propellers, a breathing device and, most importantly for its attack missions, a gunpowder-filled time bomb.

“The skilful [sic] operator can swim so low on the surface of the water, as to approach very near a ship in the night, without fear of being discovered; and may, if he choose, approach the stern or stem, above water, with very little danger. He can sink very quickly, keep at any necessary depth, and row a great distance in any direction he desires without coming to the surface,” a 1778 military journal notes of the Turtle.

The idea — a novel one at the time — was to sneak underwater to the hull of a ship, bore into it a bit with a screw, place the time-bomb and then slip off again into the depths before anyone was the wiser.

Despite its novelty, another military journal report says that the machine was “so ingeniously constructed, that, on examination, [Continental Army] Major-General Putnam was decidedly of opinion that its operations might be attended with the desired success; accordingly he encouraged the inventor, and resolved to be himself a spectator of the experiment on the British shipping in New York harbor.”

One problem arose before the submarine took to the water. The man who had been trained in using it, described in contemporary military journals as Bushnell’s brother and an “ingenious” operator, fell sick and had to be replaced. The new man, a sergeant from a Connecticut regiment, was trained as quickly as possible in the complex operation of the machine, but he wasn’t able to master the odd contraption as well.

Still, before dawn he descended into the Turtle and slipped with the contraption underwater. An October 1776 entry in the military journal of James Thatcher, tells what happened next:

“He… succeeded so far as to arrive in safety with his apparatus under the bottom of the ship, when the screw, designed to perforate the copper sheathing, unfortunately struck against an iron plate, near the rudder, which, with the strong current and want of skill in the operator, frustrated the enterprise; and, as day-light had begun to appear, the sergeant abandoned his magazine, and returned in the Torpedo [another name for the Turtle] to the shore,” it says.

Another, more detailed account said that as the sergeant made his escape, he thought he had been spotted by British soldiers has he passed by Governors Island, a tiny spit of land just south of Manhattan. In order to pick up some speed, the man released the still-armed time bomb, which presumably sank to the bottom.

“In less than half an hour a terrible explosion from the magazine took place, and threw into the air a prodigious column of water, resembling a great water-spout, attended with a report like thunder,” the 1776 journal says. “General Putnam and others, who waited with great anxiety for the result, were exceedingly amused with the astonishment and alarm which this secret explosion occasioned on board of the ship.”

The attack was a failure, but the men involved quickly determined that it was not the fault of the “wonderful machine.”

The military journals go on to say the Bushnell made further attempts at submarine combat, with varying results. But the contraption he had built was described as — appropriately for the time — revolutionary.

The Navy says that when looking back on the war, George Washington wrote to Thomas Jefferson in 1785 that he thought that the Turtle was too complicated and dangerous to be a practical weapon of war.

However, he said, “I then thought, and still think, that it was an effort of genius.”